March 18, 2013
Six months after a terrorist attack on the U.S. diplomatic facility in Benghazi, Libya, survivors of the savagery that left four Americans dead the night of Sept. 11, 2012, still have not been permitted to tell their story in a public forum. So now, lawmakers on Capitol Hill are threatening to subpoena them. 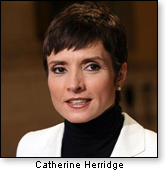 Catherine Herridge, longtime reporter for Fox News, received Accuracy in Media's Reed Irvine Award for investigative reporting on that scandal. The White House is desperately trying to put a lid on the whole thing, hoping that no one is compelled to testify as to whether it is true, as alleged, that the president, in the midst of his re-election campaign, watched the four Americans die and then went to bed.

Rep. Jason Chaffetz (R-Utah), Chairman of the House Oversight Subcommittee, says while Congress has been exceptionally patient, "we're getting to the point where there's no other option" than to issue a subpoena to the survivors.

At times, Fox has appeared to be virtually alone in pursuing the case. When Catherine Herridge's intrepid quest for answers to multiple questions became too much for the president's re-election campaign, the Obama White House organized a conference call briefing, inviting every major Washington medium except Fox News. Obviously, Mr. Obama's staff knew that Herridge would know the right questions to ask since she has been all over the story from Day 1.

According to the Tampa-based Revive America, the Obama White House is now "hiding the identities of as many as 30 survivors" of the attack, and is determined to prevent their congressional testimony "even in closed session."

In answer to my question at the AIM award ceremony, Herridge said that some of the survivors are likely intelligence operatives not necessarily free to speak out without a green light from supervisors. Apparently she had no direct knowledge of whether carrots, sticks, or threats were being offered.

With enough pressure from Capitol Hill, and with the persistence of investigators such as Herridge, any effort by the White House to shut these people up will fail. At some point, it may come down to a question as to whether it is more politically damaging for Obama to allow the full story to go public than to risk an outraged citizenry convinced he is trying to cover-up obstruction and deceit.

As for the AIM ceremony

The Accuracy in Media award event is an annual affair. The late AIM founder Reed Irvine, in whose honor the recognition is bestowed, was an investigator in his own right. Actually, he did not start out as a journalist. He was a respected economist for the Federal Reserve Board.

From that vantage point, he would have seen much that went on in the world that was being distorted or ignored by the dinosaur media. When he – as a citizen – called them out on their dereliction, he was shooed away or given the run-around. Irvine's response, in so many words, was on the order of "OK, if you guys won't do your job, I'll do it for you." And he did. That, to make a long story short, is how AIM was born.

Reed was a good friend, a good and honorable man who had no patience with alibis that did not hold up.

One of his first cases involved the Watergate scandal of the seventies. Reed detected some unexplained loose ends and dead-ends on the part of the media and the non-journalist critics of the Nixon White House.

Nothing that Reed Irvine, the new self-starting investigator, did or said throughout his own probe absolved Nixon of complicity in the cover-up. But the citizen reporter did raise some relevant questions that seemed not to interest the dinosaurs in the slightest.

It is a shame that Reed passed away just a few months before Mark Felt publicly admitted that he was the mysterious "Deep Throat," the source on Watergate for Woodward and Bernstein and a few other reporters.

Thus, a number of questions that Irvine raised and for which he criticized the media now begin to add up. Those mysteries were explored in a recent book, Leak: Why Mark Felt became Deep Throat.

That volume pokes holes in the Watergate saga as related by Bob Woodward and Carl Bernstein in their book All the President's Men, and the subsequent movie of the same name where the distortions in the original book were carried over and in fact expanded. By the time the story reached that point, the telling of Watergate mixed accurate information with half-truths, distortions, and outright misstatements of fact. Let it be remembered, after all, that Hollywood is not concerned with serious news. It's about entertainment and "Hooray for Hollywood." That may be a reason for the dereliction. It hardly rates as an excuse for sloppy reportage of a non-fictitious event. 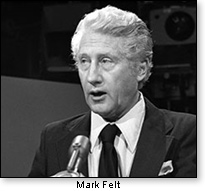 Max Holland, the author of Leak, criticizes "Woodstein," among other things, for defining Felt as a "truth-teller."A truth-teller? Really? I stopped counting all the lies that man told as revealed just in the book by Holland. Nor did Woodward and Bernstein honor the truth when they described their sources as responsible people with no ax to grind.

Forget that "truth-teller" Felt denied over and over again that he was "Deep Throat." The lowest of the low of his skullduggery was that his motivations had nothing to do with good "truth-telling" citizenship. This whole can of worms that stirred the political pot in the early seventies occurred because Mark Felt was miffed. Why the hissy-fit? All because Felt – at that time Assistant FBI Director – was angry that President Nixon had passed him over for FBI Director to replace J. Edgar Hoover, who had recently died.

In the process, Felt undermined his own FBI agents in the field who were investigating the scandal. Like a cheating student peering over another student's shoulder during an exam, Felt was cribbing notes from his trusting underlings and passing them on to "Woodstein."

The agents were furious because it no doubt cost them sources who no longer trusted them since the incomplete probe was splashed all over the media. Secondly, Felt stabbed in the back an honorable man – Patrick Gray, who was FBI Director pending his confirmation, which later went down in flames after it appeared he was incapable of controlling his own agents. 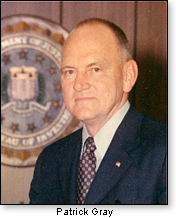 Felt also saw to it that Gray was blamed for black bag jobs that Felt himself had authorized. As he had done with Hoover, Felt had obsequiously brown-nosed up to Gray, hoping that after the latter's nomination went down in flames, he would – on his way out the door – recommend his "trusted aide" Mark Felt for the job. (I've searched the dictionary and find no indication that "trusted aide" is a synonym for "snake.")

Incidentally (or not), when Felt was before a court to answer for those black bag jobs, his fellow agents raised money for his defense. No doubt, if they had only known the truth, they would have wanted their money back.

So decades after the fact, we know that Reed Irvine's attempts to point out to the dinosaur media the gaps in their Watergate reportage were well-founded. Instead of following up on them, the media mavens whined that Reed was "harassing" them.

Here we had this burgeoning new organization pointing out the gaps for which self-respecting reporters would want answers. Instead, icons of some of the largest news organizations on the planet played the "pitiful picked-on" act, telling this self-starting citizen (in so many words), "Get away from us! You're picking on us, you big bully!"

Today, Reed would have to be smiling from on high as he sees serious national TV reporters such as Fox's Catherine Herridge, who is doing her job and showing up the "see-no-evil" dinosaurs.