June 17, 2013
We have been trying in this series to point out the seemingly never-ending chain of lies and deceit to keep Americans in the dark regarding deliberate plots to tear down the United States of America. 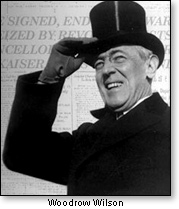 The first president (1913-1921) to facilitate that process from the White House was Woodrow Wilson – he of the so-called "progressive era." Some historians place the onus on Theodore Roosevelt (1901-1909). But most of Teddy's radicalism emerged after he was out of office and especially in his quest (1912) for another crack at the presidency as a third party ("Bull Moose") candidate. (That effort at a third term failed. It was left to another Roosevelt to achieve the three term goal 28 years later.)

Today, the enemy effort at destroying America lives on in various forms – post-Soviet communism (in its several socialist forms) from one angle, and radical Islamism on the other. Those entities are vastly different in outlook except in one respect: their shared hatred of America. Were it not for that commonality, they would hate each other.

Nobody who has watched this threat in its many forms ever said that the path to the ultimate takeover would be stage-managed every step of the way by the actual Communist Party USA, though that 93-year-old organization is still around, albeit without the subsidies it used to receive from the now defunct Soviet Union. Today communists – both with a small and capital "c" – watch with approval as others with more public respect do the dirty work of baring the enemy's fangs in never-ending pressure (violent and otherwise) to change the U.S. culture.

Those movements are able to make headway step-by-step in many areas, including (but not confined to) "Blame America first" foreign policy failures; same-sex marriage; the steady, but slow march toward the day when America's future sons will be mentored by gay scout masters; media cover-ups of criminal activity in high places (see the IRS scandal and other abuses of government power over the law-abiding citizen); the "Surveillance Society" Orwell-style; the murder of babies actually born (see the Philadelphia botched abortion case) – a scandal facilitated by the casual practice of abortion itself (publicized as "safe" and "rare"); a virtual wink that encourages a "twofer" as terrorists enter the U.S. illegally while using hapless Mexican illegal aliens as cover for an invasion whose purpose is to pull America toward a permanent socialist electorate; the attempted mimicking of the Stalin/Hitler tactic of disarming the citizenry so as make certain that at some point Americans will someday be in no position to resist the midnight house-to-house invasion of liberties accorded us in the Constitution; the well-funded effort to scrap our Constitution itself (see George Soros' plan circa 2020 for a constitutional convention) in order to make it conform to their vision of a socialist state, possibly as a first step to something even worse. 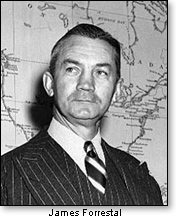 Summing all that up, you have to know – as the late Defense Secretary James Forrestal is reputed to have worried, "If our enemies only made mistakes, they would occasionally make one in our favor."

In this centennial year of the boring from within, we now spotlight one of its many chapters.

In 1947, a grand jury convened in New York City to hear testimony from Elizabeth Bentley. She was arguably the most productive ex-Communist/courier to come forward and name names of Communists who had honeycombed the U.S. government (through infiltration and influence) before, during, and after World War II.

Bentley had first told her story to the FBI in November 1945. Since then, FBI Director J. Edgar Hoover had passed on the information to officials of the Truman administration, mostly to little avail. Mr. Truman's options?

So what do we do now?

1 – He could have unleashed the G-men to spread a huge dragnet and bring charges against the people Bentley named and derive the publicity as a Red-fighting stalwart. He was in fact viscerally anti-Communist, so why not? But hold the phone, as we ponder –

Option 2...Most of those people named by Bentley had been brought into government by or were closely associated with Truman's predecessor, the then-recently deceased Franklin D. Roosevelt, and many were retained by Mr. Truman. In 1944, FDR had pulled the man from Missouri from relative obscurity and selected him to run on the Democrat ticket as his vice presidential candidate, setting in motion a chain of events that ultimately made him President of the United States.

And the point is? Truman would need the Democrat party's support in his 1948 quest for a full term to keep his job, elected in his own right. Some key party operatives would be less than fired-up to go out and work for or contribute to the campaign of an ingrate who would betray the memory of the sainted FDR just to save his own skin.

Cracking the rock from the hard place

So what to do? Got it! Just call a phony grand jury, but instead of bringing forth a mountain, serve the public a mouse, just enough to satisfy the voters. Don't indict anyone who counts in this whole mess. Instead, simply indict some well-known two-bit Communist Party members – not in government, and for that matter, not even in the actual leadership of the open CPUSA of that time. That'll satisfy the booboise until after the election, as the "New Dealers" get off scot free, and the no-nonsense president comes off as Fearless Fosdick. Neat, no? 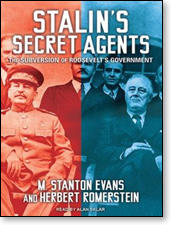 That is exactly how the grand jury "drama" played out.

As M. Stanton Evans and the late Herbert Romerstein relate in their well-documented Stalin's Secret Agents, The grand jury met (behind closed doors, of course, as grand juries do) for about a year and half from June 1947 to December 1948, right through the election cycle.

Over that time of off-and-on sessions, the jurors heard from about one hundred witnesses, "an all-star team of Soviet agents, Communists, and close-in fellow travelers, all familiar to the FBI, though not to the public." Some were still on the government payroll, others eased out through backstage and congressional pressure.

The "accepted" version of the mountain vs. the mouse ending of the investigation (described above) is that Bentley's charges were not corroborated by a second witness.

However, Evans and Romerstein report that today "we have information that wasn't available in previous decades, including some of the jury minutes and archives of the FBI pertaining to the cases."

The authors explain that "federal prosecutors from the outset did have a confirming witness to back up Bentley and thus pave the way for indictments, but as of the summer of 1948 simply failed to call him."

Wishing makes it so?

"The uncalled witness cooling his heels for over a year while the grand jury was in progress was Whittaker Chambers," according to one of many annoying truths in Stalin's Secret Agents.

Said annoying truth continues: "Chambers didn't know all the people on Bentley's list, but he did know or know of a considerable number, so there was a substantial overlap between her suspects and those who could have been named by Chambers."

The Evans/Romerstein investigation goes on to record that "Chief among these were [Alger] Hiss and [Harry Dexter] White, two hugely important suspects. Indeed Chambers knew far more about this than Bentley, since he had worked with them directly as she hadn't." But "no second witness in the cases, no indictments." Off to the historic whistle-stop campaign trail for Harry. (Hiss was outed and went to prison following a congressional probe. In public, Truman called that probe a "red herring." Privately, he muttered "Son of a bitch, he betrayed his country."

What hundred suspects? Be gone, I say!

Ho hum...just another in the long parade of deceits in high places, accommodating the Tear Down America project, aided and abetted by politicians who cynically boost their fortunes at the expense of America's survival. Poof! Witness? What witness? All this happened 65 years ago. Let us posit that sometime hence – say, 2078 (assuming there is still a country by then) – investigating authors will nail Barack Obama as the mastermind behind the scenes of today's IRS scandal, that he meant it when he said, "We will reward our friends and punish our enemies." Or that Hillary Clinton personally ordered the Benghazi cover-up to protect Barack Obama from the wrath of the booboise.

Terrorists? What terrorists? Big brother punishing political enemies? What big brother? What enemies? Poof! – Gone! Just like magic – to be unmasked when we're dead and buried. Piece of cake. And besides, if we lie to you, we'll all be gone by the time the takeover is completed. So, as Hillary might say, "What difference does it make?"