Wes Vernon
Is there any chance for strong leadership on Capitol Hill? One can hope

October 6, 2015
How can things go right in Washington? Lately, there has been little reason for conservatives to think they can. And we're not about to raise hopes only to be disappointed. 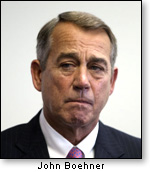 Right now, the big focus on Capitol Hill is the contest for the number one position in the House of Representatives.

In the week since House Speaker John Boehner (R-Ohio) said he would step down from the leadership and from Congress itself at the end of this month, two things have happened as a result.

1 – The outgoing speaker has said he wants to accomplish a lot of "unfinished business" before he hits the road.

2 – The race for his replacement has just become interesting. There are good men who want the job. It very well may not be a "done deal" for the anointed successor.

In some ways, one has to feel sorry for the Ohio lawmaker. He arrived back in the early nineties as an eager conservative back-bencher pitching in to help Newt Gingrich's revolution to break the 40-year Democrat dominance of the House or Representatives – the "People's house." And the young Boehner was gung-ho to make good things happen.

So, a quarter century later, how could things go wrong? After all, when Boehner was "the new kid on the block," Ronald Reagan's eight glorious years bringing peace through strength had raised conservative confidence, and the socialist policies that had infested our government through most of the preceding fifty years were thankfully in retreat.

A young lawmaker like John Boehner could have been forgiven for his over-optimism. Now, he prepares to use his last days in office to accomplish such things as – What? Lifting the debt ceiling? Again? As pop star Bob Seger once put it (in a different context, of course) "Wish I didn't know now what I didn't know then."

Mr. Boehner need not be mistaken for a "Mr. Smith Goes to Washington." But the son of a bar and restaurant owner did arrive with decent intentions.

The establishment wing of the Republican Party is bitterly angry that Boehner lost out in a showdown with principled conservatives of the House GOP caucus. The insurgents had the gall to insist they were there to do the business of the people who elected them to Congress. Here they thought they had this man under their thumb, and his troops pushed back, effectively giving him the boot. 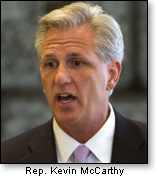 But not to worry

Too bad about John. But Rep. Kevin McCarthy (R-Calif.) is next in line, and the party's power brokers hope he is ready to dance to the RINO tune of surrendering to Obama as ordered by the party bigwigs.

McCarthy is House Majority Leader. As second in the House pecking order, he worked closely with Boehner, who promoted the "stand still and don't rock the boat" strategy, because oooooh! otherwise Obama will play demagogue again and win.

The Republican wing of the party says let the president holler! We need this showdown now before every gate crasher crossing the border is registered quickly to facilitate a one-party rule forever in the USA.

Conservatives on the Hill are pushing back. There are at least two candidates vying with McCarthy for the Speaker's job. They are Daniel Webster of Florida, and Jason Chaffetz of Utah. They have similar records, which are conservative. They are both good men, but as this column sees it, Jason Chaffetz is the stronger of the two. (And by the time you read this, there may be others, though time is running short.)

Another factor intrudes on this contest. Kevin McCarthy, although a decent person – as far as we know – nonetheless is weak. One issue is he has a problem putting sentences together. A man who cannot express his thoughts with clarity and mangles his syntax is not likely to sass back his betters. If he finds himself supplying fodder for the late night TV comics, the media will be less forgiving of him than they have been of Joe Biden.

The Californian drew fire from his colleagues the other day when he made a clumsy-worded comment that was interpreted by Democrats as meaning that the House Benghazi committee had been created for the purpose of taking down Hillary Clinton's presidential campaign. His words were "misinterpreted," said McCarthy. That, as it happens, is the problem: having to explain what a leader "meant to say." Political smarts are another requirement for an effective House Speaker.

The U.S. Chamber of Commerce, which hauled out big bucks to knock off Tea party candidates for the Senate in 2014, now is set to repeat the performance in 2016, according to Roll Call.

There is no way it could be a coincidence that the information became public within a mere few hours after Boehner's coming exit was announced. In fact, the story indicated as much.

Obviously, someone with a short fuse hit the ceiling. One can imagine a thundering declaration and fist-pounding heard all throughout a Washington building. A clean version of an uttered oath might have resembled something like "We will show those illegitimate people!" 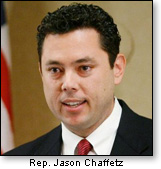 The U.S. Chamber is now planning to spend $100 million to defeat conservatives in 2016. Here we go again, and much as I hate to say it, this is war, meaning conservatives should be politically armed to the teeth.

Chaffetz notes that if McCarthy is nominated by the House Republican Conference as its nominee for the speakership, 246 Republicans will vote. 218 votes are required to be elected.

"But there are nearly 50 people, a growing number that will not and cannot vote for Kevin McCarthy on the floor. He's going to fall short on the floor of the House," the Utah Republican argues.

The Chaffetz record in brief

Gathering some steam for his uphill battle, Chaffetz touts these and other reasons why he should lead House Republicans: Former chief of staff for a governor; athletic scholarship to BYU; high voting scores by the American Conservative Union; in 2008, defeated open borders GOP incumbent congressman who'd outspent him nearly 3 to 1; took the lead in early congressional probes of the Benghazi scandal; chairman of a House national security subcommittee; vocal opponent of same-sex marriage legalization by the D.C. government.

Rep. Daniel Webster (R-Fla.), Chaffetz's colleague and opponent in the effort to oust McCarthy, is described by The Almanac of American Politics as "a staunch conservative," a depiction well supported by his voting record.

Mr. Webster has his own record of ousting an opponent. He defeated an outspoken (in the extreme) liberal, Rep. Alan Grayson (D-Fla.), once voted by colleagues in a Human Events poll as the "biggest jerk" in the House.

Because Mr. Webster is less well-known than Chaffetz or McCarthy, I inquired as to whether he had any plans to exit the contest for Speaker.

On Monday afternoon, Webster's spokeswoman Elizabeth Tyrrell e-mailed me, "Definitely still in the race," and promised to keep this column apprised of anything further to this story.

The effort to add strength to the backbone of the Republican wing of the GOP in its House leadership at this point appears to be gathering steam. But in the absence of something unexpected, it is viewed as a long shot, albeit a confrontation worth having.