June 2, 2016
Soap operas have a history of re-running the same old scripts over and over again.

In the radio days of Stella Dallas and Backstage Wife, some put-upon wife was always running into trouble with her villainous mother-in-law who never shook her belief that the young wife just wasn't good enough for her son.

In time for the summer vacation days, the husband and wife would kiss and make up and live happily through the summer until the fall season started up again, with a slight revision of the old theme guaranteed to keep the ratings up. 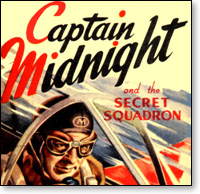 The kiddies had their own never-ending drama in Captain Midnight, the all-American anti-crime pilot whose sole mission in life apparently was to keep at bay an evil life-long career criminal, Ivan Shark. That guy kept being sent to prison only to escape, and lead the clean-cut captain and his youthful side-kicks on another thrill-packed adventure until they would catch up with him, always in time for Christmas or Easter break.

No one bothered to raise the question as to why the prisons were so lacking in basic security that old Ivan was constantly escaping. But the show sold lots of Ovaltine drink, so the kids could send in emblems inside the can for a "secret" Captain Midnight "decoding ring."

The Clintons: back by popular demand?

So in the 21st century, we have the repeat offenders (again) routinely "getting away with it." Only this time, they are for real, and it's the bad guys who are "always getting away with it." What's more, they are accused of far worse crimes than a bossy mother-in-law or a clever fiendish-laughing old man who apparently knows how to pick the locks of several prisons.

For 24 years, from 1992 and still going on in 2016, the Clintons have been caught up in scandal after scandal. The script calls for Bill and Hillary to "step in it" with everything from allegations of bribery, lying under oath, slipshod security, the meaning of "is," suspicious deaths, credible accusations of rape, Oval Office intern romps, assault-style gropes – with Hillary often covering for Bill. Overnight, there would be gasps galore about how unspeakably "outrageous" their behavior. You are urged to believe that, taken in the composite, everything is a partisan witch hunt. None of these misdeeds happened. Not one. Everything is a "right-wing conspiracy." Every single one.

Your intelligence is insulted, and media, sometimes openly, often in private giggles of Washington newsrooms, marvel admiringly at how smart and clever the Clintons are at "getting away with it."

Hee! Hee! Isn't that cute how White House-connected burglars broke into the Watergate and Nixon's riding to victory in the election just the same. Wow!

A couple of weeks ago in this space, we expressed our belief that all the media hype about how Hillary would be arrested and forced more or less to campaign in an orange jumpsuit would not happen – that the Clintons would "get away with it" again. Altogether..."Just like they always do." One suspects this may be the old game of "raise the hopes of the 'good guys' (conservatives) just to let them crash."

Chaos everywhere: So where to land?

As we write, there are so many political bombs erupting and threatening new scandals complete with real-life scripts that the old fiction plots could never have kept things in order. 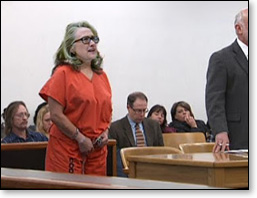 Liberals are so hell-bent on keeping Hillary out of an orange jumpsuit that they can't content themselves with loud enough claims that the former first lady is innocent, victimized by those wascally Wepublicans.

You might compare it to a scene where a facetious joker (otherwise normal) greets a police officer entering a peaceful coffee shop by saying "I didn't do it."

That is not to say Hillary may not end up in the jumpsuit, though again we fear the Clintons "always get away with it."

"Scared rabbits" to the GOP "rescue"?

Donald Trump held a news conference where he stunned reporters by answering their "when have you stopped beating your wife" questions in kind. It was the news conference conservatives have desperately hoped some Republican would someday conduct.

It may be a crown jewel for the moment, but trust the "scared rabbits" in the establishment GOP to come to the Democrat rescue. Bill Kristol just got some media in his effort to find a "Never Trump" third party candidate to muddy the waters. Yeah, right. Try to sell that candidate to all the people who took the trouble to vote in the primaries. Think they'll be amused? And then, on top of that....

For some of our younger readers – Vincent Foster was a longtime aide to Bill Clinton going back to their Arkansas days together.

But when Bill came to Washington to get his new administration started up, he was, as is his wont, at the center of several controversies, some including failed appointments or confirmations, and his wife's questionable Rose law firm conduct. In July 1993, his pal Foster was overwhelmed by all the scandals and errant Clinton-created problems. Vincent Foster was found dead in Fort Marcy Park in D.C.

Though Foster's death was ruled a suicide, some investigative journalists and researchers became suspicious that some of the circumstances presented justification for a finding of homicide.

That included Reed Irvine, the late chairman of Accuracy in Media (AIM) and (full disclosure) a friend of this writer; and Cliff Kincaid who had been mentored in his younger years by Irvine. I had written for AIM under Kincaid's editorship. Kincaid also is now a fellow columnist for this website.

A third investigating journalist was Christopher Ruddy, who over several months authored a long series of investigative reports for The New York Post and the Pittsburgh Tribune Review. Ruddy is now CEO for Newsmax.

There are pivotal issues in the Vince Foster case that are yet to be addressed or explained by those who have heatedly insisted the case was closed:

1 – No bullet was ever found at Fort Marcy Park, the place where Foster supposedly shot himself.

2 – The gun that was found in his hand has never been positively identified as his.

3 – Foster's fingerprints were not found on the gun. 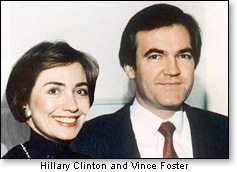 Kincaid says the official "suicide" investigations were flawed. He points out, for example, that Miguel Rodriguez, lead prosecutor in charge of the grand jury in the case, resigned because of "interference with his investigation."

At that time, Irvine opined that if Rodriguez had been permitted to complete his grand jury probe, "he would have exposed the many lies that were told to cover up Vince Foster's murder."

As for Chris Ruddy, he has written a book on the case, "The Strange Death of Vincent Foster."

It is logical that Donald Trump, with his reputation for speaking out loud about embarrassing issues that have not been satisfactorily explained, would raise the Vince Foster case and the Clintons' involvement therein. He has already stirred the first signs of a revived firestorm on the story.

Researcher Hugh Turley, whose findings have left him hip deep in detailed information on how the allegations were hushed up, recently wrote an updated article on the case for the AIM Report. It is titled "Hillary Clinton's Continuing Lack of Interest in Cover-up of Vince Foster's Murder." More information on the Foster case cover-ups can be found at the website www.FBIcover-up.com.

During the campaign, we very well may hear more of the case. Whether or not that happens then, or later, someday this virtual lock will be picked – and this time it won't be the "good guys" who will have to pay the price...unless of course, the Clintons get back to the White House where they and their henchmen can orchestrate more damage. That's in your hands, America.