That's the undercover name accorded him for the time being by the FBI and others in government. That designation was handed to a Washington lobbyist who had been offered a role in the super-secret counterspy effort to push back against a deal originated in 2009 by Russians eagerly seeking to purchase about 20 percent of America's stock of its vital war making-capable uranium to Russia. (See this column's recent not just unfit; actually dangerous Part 3). 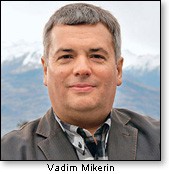 According to several news reports, the lobbyist –
CS-1 – was contacted by one Vadim Mikerin, a Russian nuclear official. Mr. Mikerin was at the time in charge of a Bethesda-based entity known as Tenam USA, a subsidiary of the Russian affiliated Rosatom company, a firm that was instrumental in the increasingly expanding uranium scandal that is on the cusp of engulfing Washington unless the lid slams shut, possibly under an injunction of silence until we're all dead – of natural causes that is; more immediate causes could come if those who are careless with U.S. security succeed in the cover-up.

There are floods of details that hopefully will be widely known soon. Herewith a brief outline of what the story adds up to, as of now:

Mr. CS-1 was minding his own (lobbying) business when he was approached by Mikerin – whose Russian-connected firm in Bethesda was operating right under the nose of the federal government, which is what Bethesda is – just over the line from D.C. What Mikerin was looking for was a person with Washington connections to participate in an effort to defraud U.S. contractors to pay inflated prices for uranium that was the centerpiece of the U.S. sale to Russia. The tour of the laundered and complicated route of the uranium sale apparently went through shell companies and secret bank accounts in Latvia, Cyprus, Switzerland, the Seychelle Islands, according to Andrew McCarthy, the former prosecutor who has been investigating the case. Sometimes cash was involved, he says – with "skin" divided into envelopes stuffed with thousands of dollars. CS-1 became suspicious and went to authorities. He was then ordered to remain anonymous (about the case) in public, supposedly until the "right time" to tell his story – something the lobbyist was anxious to do, but has been restrained, apparently for at least the last four years.

There is a laundry list of names of people who have some explaining to do. Here are a few: ex-President Obama, whose administration okayed the deal in the first place, though the trail began with his administration's effort to forge a "new start" with post-Soviet Russia, an idea that fell apart when Putin's Russia attacked neighboring Georgia; and Hillary Clinton, whose duties as Secretary of State included membership on CFIUS – the panel that was charged with signing off on the deal. 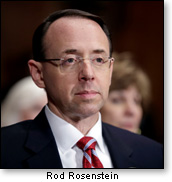 Then we need to mention a few other actors in this drama: Assistant Attorney General Rod Rosenstein, an Obama appointee still in office because the foot-draggers in the Senate are slow-walking confirmation of many of President Trump's choices for high posts. (One may remember when Democrat Senator Chuck Schumer had the gall to call out Rosenstein's name from the floor of the Senate, demanding that he appoint a special prosecutor to probe the phony charges against the Trump administration's alleged "collusion" with Russia – an ironic order considering that the real Russian scandal may backfire on the Democrats any day now.

Speaking of which, we cannot forget the name of Robert Mueller, Special Prosecutor. As FBI Director at the time, he was right in the thick of those who at least knew about the Russian deal. Therefore, the question may be asked: What's he doing sitting in judgment of others? He's the one who should be answering questions.

So all of this may soon be under the pitiful light of public exposure – unless – unless the super-influential fake media are able to slam the lid tight enough to keep the slime from oozing out so as to shine the light of exposure of more big names...like – well, let's see if the secrecy prevails. If it took Washington 54 years to complete release of the papers in the Kennedy assassination, who knows how long they can keep the wraps on this. One can hope someone has CS-1's back.