If November 4th's elections turn out as all the data gatherers, electoral analysts, and yours truly presently assess, the Republican Party would most likely gain the caucusing majority in the U.S. Senate, 52-48. That possibility however is way too close to call, like calling ball or strike on a knuckler halfway to the plate.

There are those who see it otherwise. The Washington Post sponsors some of the best pollsters around, but we know they are at essence cream of the crop collectivist propagandists; they have recently claimed the Democrats have a 51% shot at retaining Harry Reid's leadership. The probability specialists at FiveThirtyEight say Republicans are at 61%. Most play it aptly safe and rely on "too close to call."

The Republicans must pick up six seats to get to a 51-49 advantage. If it ends up 50-50, our Midas tongued, purported Vice President Joe Biden may apply his brainpower to throw party line votes Democrat. And do constitutional framers look on from Heaven to ponder their product?

In many of these close contests, GOP candidates are to varying degrees hampered by Libertarian Party entrants. Libertarian voters could feasibly become spoilers in seven states: Alaska, Arkansas, Kansas, Michigan, New Hampshire, North Carolina, and/or Virginia. That is a set of beaconing examples of why the runoff voting system, as is used by Georgia and Louisiana, seems an imperative step for breaking up the highly manipulable two-party lock in American politics.

Republicans are doing a fine job of hampering themselves due to party bossmanship. Hammers of force and finance via entities such as the National Republican Senatorial Committee and the Republican Senate leadership in the person of Kentucky Senator Mitch McConnell, are held tightly and often wielded against the more authentic Republicans of the Tea Party with greater velocity than versus Democrats. This, as with the presidential failures of McCain and Romney, makes for a crippling self-defeat factor in many GOP elections. It is a symptom of the corruption of globalist, "New World Order" money, applied in the name of gaining greater global power held by fewer, in "combination," to use John D. Rockefeller's favorite word (Mussolini preferred "fascism"). 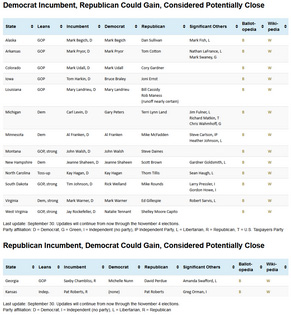 For constant updating on the close elections, we present two tables, one for Republican incumbents and one for the neo-Marxist antithesis party. See SovCam.org's "Which are the Hot U.S. Senate Races" page. It also links to detailed drill downs at Ballotpedia and Wikipedia for each election, including recent poll results. Then at the bottom, it links to what is even more important to know – and to do.

Considering the megatonnage of lives, liberties, and livelihoods at stake, "fun" is not the best word for delving into these matters. Nevertheless, let us dive into the "fun stuff." State-by-state, here is the SovCam line at the moment on two key Senate races defying the finest proffers of SWAG (scientific wild-donkeyed guess). If the Republicans can recover their edge in either of these two states, it could mean greater than a hair-splitting edge overall in the legislative branch and greater hope for those true Republicans praying for and seeking a return to American authenticity.

The most sense-defying contest: "What's happened to Kansas?" ask Republicans across the nation. That horse race is about incumbent and GOP organization man Pat Roberts vs. Democrat-deferred, alleged Independent, and self-attested Obama and Romney voter both, Greg Orman.

Presently, Orman is leading in polls, due to a sort of Jesse Ventura factor, of apparent independence plus novelty. Pundits over-stressing political fundamentals opine Roberts should recover, but this situation is divergent by its nature. Roberts was shown up for certain RINO tendencies during the primary context with Tea Partier Milton Wolf. Orman has declared himself a human jump-ball, who if elected will caucus with whichever party turns out the majority. Perhaps this election should be entitled "The Search for Conviction." Ballotpedia is attempting to keep up with it, including litigation over whether a Democrat candidate's name must be printed on the ballot.

Nearly as troubling, ostensibly conservative North Carolina voters are having a hard time deciding whether to ditch Obama-paralleling, Obamacare-voting Democrat Kay Hagan for businessman and state legislator Thom Tillis. This may be seen as a contest between the new, Obama-organized machine of this repetitively targeted state vs. Tillis' uphill struggle for name value (name recognition plus favorability). Hagan may be hurt by a very serious scandal involving her husband and money from the 2009 "stimulus" act, but determining which Democrats are hurt by serious scandals amidst their scandalously Democrat-inclined voters is an art all its own, one of a surreal genre if not occult.

Much of Tillis' campaign is about...Hagan. That includes this new ad, which portrays her as following Barack Obama's footfalls even in neglecting the rise of ISIS, which seems on the verge of turning the entire arduous set of U.S. operations in Iraq since 2003 into a bloody monstrosity much more atrocious than Saddam Hussein's Baath Party had ever wrought. Perhaps a significant percentage of voters will pay increasing attention to that titanic Democrat failure and horror, nationally.

Libertarian Sean Haugh is being projected to come off with as much as ten percent of the NC vote, which would likely spell doom for prospects of turning the senatorial dial one notch toward renewed liberty with Tillis. If the Libertarian were not effectively corrupting the election, my nod would go to a Republican pick-up.

Kansas is the one state leaning toward flipping Democrat. That being the case, seven must flip Republican to give them the majority. At this passing moment, I would give them eight, if I had to say: Alaska, Arkansas, Colorado, Iowa, Louisiana, Montana, South Dakota, and West Virginia.

We will continue to assess the races, down to their wires, but just what does a McConnell-orchestrated Republican majority in the Senate along with a Boehner-bossed House do for us? How will it bring America into realignment with our Essential Sovereignty System, if you will, of truly self-empowered popular sovereignty under God, with state and national sovereignty to guard it? How does that revitalize us by our Natural Rights, of life, liberty, and property? 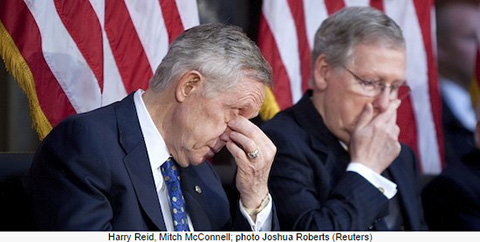 Now, those questions refer us to the true race we are in. We ponder it here: "2014 U.S. Senate Elections: So what do we need to know?"