January 15, 2010
The following is the Introduction (minus endnotes) to the book Hungry Souls: Supernatural Visits, Messages, and Warnings from Purgatory, by Gerard J.M. van den Aardweg, Ph.D. Many thanks to Lesly Bratt of TAN Books for allowing me to reprint this material. Click here to order a copy of the book.

Introduction: Purgatory and the Paranormal
For those who [at death] find themselves in a condition of being open to God, but still imperfectly, the journey towards full beatitude requires a purification, which the faith of the Church illustrates in the doctrine of purgatory.

This is how Pope John Paul II explains why purgatory is necessary. For, he continues, we are called "to be perfect like the heavenly Father during our earthly life... sound and flawless before God the Father 'at the coming of our Lord Jesus with all his saints' (1 Thess 3:12)." 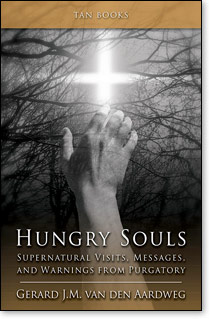 Here John Paul re-affirms the old wisdom concerning the existence of a "state of purification" after death. Purification means atonement for sins and their effects on the soul. It is not a painless, automatic process of "growing" the soul, of attaining full "self-realization" through the acquisition of ever more insight after death, as is the soothing theory of some spiritualists. It is not an accumulation of learning, through a series of "reincarnations," until some point of perfect wisdom is reached, as in the fantasy of some Western New Age disciples. Such are childish attempts to suppress man's deep awareness that the basic dimension determining his destiny in the next world is not knowledge or experience, but moral purity: sin, and the traces it leaves on the soul, versus holiness.

In our culture today, of the three destinations that traditional Christian doctrine teaches may follow death and judgment  heaven, hell, and purgatory  only belief in heaven or some such happy state has widely survived. The prevailing cheap optimism holds that (if there is anything at all across the threshold of death) the life of practically everybody automatically ends up in a state of bliss. De-christened and inwardly impoverished Western man may acknowledge having his imperfections and shortcomings, but doesn't look upon himself as sinful. To him, atonement for or purification from sin is a "medieval" idea.

We are cherishing a shallow religion, a hollow religion, which will not profit us in the day of trouble. The age [our age considerably more than his!] loves an exclusively cheerful religion. It is determined to make religion bright and sunny and joyous, whatever the form of it which it adopts. And it will handle the Catholic doctrine in the same spirit... we take what is beautiful and attractive, shrink from what is stern and painful.

Purgatory (to say nothing of hell), penance, expiation, God's holy Justice: these just do not fit in with today's cheerfully cheap religiosity. However, the truth remains that man has to be "sound and flawless before God the Father" when, after death, he appears before Him to render an account of his life. Only holy souls have direct access to the blissful abode where "nothing unclean shall enter." Therefore, "every trace of attachment to evil must be eliminated, every imperfection of the soul corrected." The place for this correction of the soul's imperfections is purgatory.

This is a profound and holy mystery, and also an appalling mystery, whose frightening aspects cannot be glossed over. But the reality should not terrify us. John Paul II continues: "One last important aspect which the Church's tradition has always pointed out should be re-proposed today: the dimension of 'communio'... the ecclesiastical solidarity which works through prayer, prayers of suffrage, and love." Here John Paul teaches us that penance and pain in purgatory are mitigated by the comfort of mercy. In the final analysis, purgatory is the mercy of Christ working through his Mystical Body, the Church.

Close to the Vatican, alongside the Tiber in Rome, stands a beautiful neo-gothic church  the only one in that style in the whole city  which is devoted to the Sacred Heart of Suffrage; suffrage in the meaning of help to the souls in purgatory. In a room in the sacristy are exhibited a small number of strange, fascinating "relics": objects bearing visible, physical traces left by souls in purgatory. The collection is known as the little Museum of Purgatory, the Piccolo Museo del Purgatorio. The Museo and the church of the Sacred Heart of Suffrage represent two sides of purgatory: the collection offers impressive bits of tangible evidence for the harrowing existence of the souls there, while the church itself displays the Christian comfort of the mercy and charity for the suffering souls as practiced since time immemorial by the Catholic Church. The great central triptych in the church, representing the Sacred Heart, the poor (or holy) souls, and various saints, has even been called "a visual compendium of Catholic doctrine on purgatory" by Pope Benedict XV.

The "paranormal" evidence displayed in the Little Museum of the church and some additional evidence, notably the burned-in hand in the corporale of Czestochowa in Poland, is instrumental in developing devotion to the suffering souls. It brings us nearer to the reality of purgatory by allowing us a closer look into this awful abyss of purification.

These evidences also appeal to the modern mind, with its preference for concrete proof and witness testimony. They bear the signature of souls who have appeared from purgatory to ask for mercy, revealing something about themselves and their condition of suffering and doing penance.

The paranormal specimens in the Museo del Purgatorio and an item like the "hand of Czestochowa" are the best-documented paranormal evidence to be found in relation with contacts with the dead. The authenticity of the apparition stories linked to each of the specimens in the Museum has been verified by critical priests and theologians and by trustworthy witnesses. And despite their relative rarity, they are not the only ones in existence. Uncritical credulity is of course not the right mindset to approach them, but it is no less narrow-minded to exclude beforehand the occurrence of events other than those of everyday experience, presumptively concluding that they must be the products of superstition or even fraud. G. K. Chesterton rightly noted (in The Incredulity of Father Brown), "it is natural to believe in the supernatural. It never feels natural to accept only natural things."

Our present tour of purgatory, then, will be mainly a tour of human experiences, of trustworthy apparitions of souls from the afterlife. Although we shall occasionally refer to theology, theology is not our prime focus here. But then, it is clear that many of these apparitions from the dead are nonetheless full of theological wisdom. For all reliable reports of apparitions from the dead are interesting; but the fact is that the overwhelming majority of the more elaborate, instructive, and well-documented apparitions come from the Catholic world. There seems to be a message in that fact.

The program of this book is as follows: after a few introductory considerations on the notion of purgatory in history and on apparitions of the dead in general, we'll enter the Museo del Purgatorio in Rome to examine the individual items of its collection, presented to the reader by the artful work of photographer Janusz Rosikoñ. That will lead us to the inspection of more such pieces of evidence; to begin with the relic of Czestochowa, and then to some singularly informative cases of apparitions of souls from purgatory in the twentieth century. As we try to penetrate a little into this too-often forgotten part of the next world, we may become more keenly aware that the souls in purgatory are in need of our help and are too often forsaken.

Confronted with some of the pieces of evidence from the Museo and with the stories behind them, many people understandably react with a shiver. Manifestations from beyond the tomb are indeed frightening, in particular visible apparitions, ghosts, or phantoms. And not only when they are of demonic origin  even apparitions from heaven may incite fear. Moreover, the signals from purgatory point to grievous suffering.

But when looking at the pictures of burned-in hands, or meditating on the stories of apparitions from purgatory, we must keep in mind that these souls seldom unfold their whole inner condition, if such a thing were possible at all. They show only the face of their profound misery, presumably because the main reasons for their appearing are to ask for mercy for themselves and to awaken the awareness of the seriousness of sin in the living, urging them to strive after holiness. But it is more difficult to understand  for the next world really transcends our earthly perceptions and experiences  that purgatory has simultaneously a totally different dimension: the "poor souls" or "holy souls" seem to experience unimaginable consolations and joys as well. Tangible manifestations and communications from purgatory are, so to speak, coded in the language of images and words we can understand, but that is only an approximation of the language of the hereafter. We know that grief and joy can coexist in the soul on earth, but how the extremes of suffering and rejoicing can go together in purgatory is beyond normal human experience. Yet on balance, the place or state of purification, of God's fathomless justice, is at the same time a place or state of God's mercy, of hope, inner peace, and joy.

St. Francis of Sales, a Doctor of the Church who can be called an authority on this issue, was amazingly outspoken: "The thought of purgatory is productive rather of consolation than of terror," he wrote. "Great as the torments of purgatory are... the interior consolations granted there are nevertheless so ineffable that no earthly bliss and enjoyment can equal them."