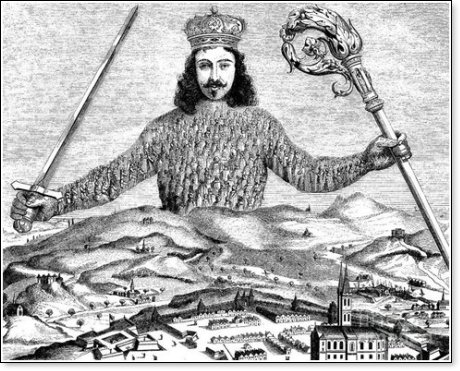 What if, similar to a Medieval European King or the Mafia, American government, which is supposedly there to "protect you," is actually seeking to self-servingly control you via a plethora of government services, which over time slowly loses quality: The mass media, your healthcare, the banking system, the brainwashing education of your children, the nation's energy production, your personal energy consumption, your internet and telephone communication, and your retirement income. American government with this much control over your life is, well, a totalitarian government, an American Leviathan. We the American People are on this degenerating Socialist path to dystopia, a slow but accelerating downward trajectory, which in Marxist Orwellian Newspeak is called "Progressive."

"The safest road to Hell is the gradual one – the gentle slope, soft underfoot, without sudden turnings, without milestones, without signposts." C.S. Lewis – The Screwtape Letters

"By bringing the whole of life under the control of the State, Socialism necessarily gives power to an inner ring of bureaucrats, who in almost every case will be men who want power for its own sake and will stick at nothing in order to retain it... It cannot be said too often – at any rate, it is not being said nearly often enough – that collectivism [Socialism] is not inherently democratic, but, on the contrary, gives to a tyrannical minority such powers as the Spanish Inquisitors never dreamed of." George Orwell

Real Socialism, as opposed to the Socialist-flavored Capitalism of Scandinavia, is a poison pill for any and all nations which swallow it down. It saddens me to say that the Democrat Party has been taken over by true-believing, Manifesto-thumping Marxist Socialists, degenerating, at the highest levels, into a criminal organization. When a criminal organization runs a country one acquires a criminal government. The term "Democratic Socialism" is a euphemism, Orwellian Newspeak for Socialist Socialism, because it doesn't matter if this unjust and self-serving scourge is put into place through anarchy, violence, brutal conquest, or by democratic vote of confused and addled people; the end result is still Socialist tyranny. Democratic Socialism is where this disgusting and ultimately suicidal system of economics, social engineering and government is voted in by a majority of brainwashed fools, as if birds voted for having a snake in the nest. The fly in the Socialist ointment is precisely the fact that fallible, greedy, self-serving, violent people, not angels, inevitably make their way to the top of the Socialist dung heap.

Those who would destroy our Judeo-Christian moral foundation and fundamentally transform the United States in to a Socialist country, and eventually into a self-worshiping totalitarian Marxist or Fascist dictatorship, are embedded in our mass media, entertainment industry, universities and government. They appear to be strong and well organized. In order to prevail, in order to restore our nation to its moral and physical greatness, it will be necessary for American Patriots to engage in a long term inter-generational rebuilding project, not just the rebuilding of bridges and buildings, but a reformation of our personal and national character, and a restoration of our American Minds.

Tyrants possess unobstructed power according to their will, with few or no limits; they possess wrongful liberty to do as they please with you, and the product of your labor. Our Federal Government is moving in the direction of tyranny because all three branches have, at various times, without authorization of Constitutional Law, self-servingly amended our Constitution against our will. Thanks to our Founding Fathers we have in our hands the peaceful and legal means to stop further Socialist degeneration of our country, so that it does not slide into a dystopian hell on earth.