— Another scandal in the history of Tom Monaghan's Ave Maria brand 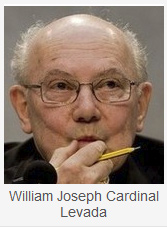 AVE MARIA, Florida: Some consider that William Joseph Cardinal Levada's presence at Ave Maria University's graduation ceremony this weekend is an "honor." Surely Tom Monaghan does — as king of the Ave Maria brand — and that may be part of the reason that Cardinal Levada will also be honored by AMU with the Degree of Doctor of Humane Letters, honoris causa.

The pomp and circumstance and the full regalia that will be displayed this weekend may conceal, at least for a few hours, the problems that besiege Tom Monaghan, after receiving news that a jury has found Ave Maria College/Ave Maria University, Inc., liable, for unlawful discharge of an employee.

This seems like an awkward situation for America's highest ranking Cardinal in the Roman Curia, who has flown in from Rome — and now finds himself honoring a university which has committed an unlawful act.

While the cardinal and AMU are exchanging honors, here is what thousands of readers are coming across in the following article published by the The Detroit News :

"Ernsting and three others who cooperated with the federal investigation were among five employees fired. Testimony indicated that Ernsting and the others refused orders to alter records, and continued to communicate with investigators despite being ordered by superiors at the school to stop.

The decision to fire them came after a lunch break at a board of directors meeting where Monaghan failed to gain support for his proposal to fire the college's President Ronald Muller.

On July 1, 2010, the Naples Daily News reported that a Michigan judge had ruled "that Ave Maria University in Florida can be held liable for an alleged wrongful firing of an employee of now-defunct Ave Maria College, allowing the case to go to trial." 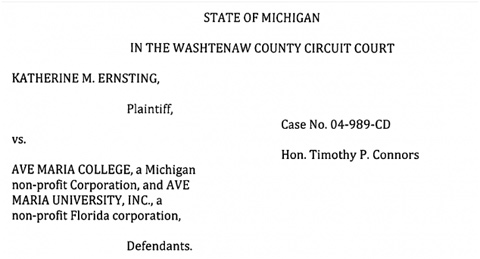 On Wednesday, May 4, 2011 a Washtenaw County, Michigan jury awarded Mrs. Ernsting over $400,000 for damages suffered as a result of being unlawfully discharged from employment by defendant, Ave Maria College/Ave Maria University, Inc., in violation of state law which protects employees who reveal wrongdoings in their workplace. Ernsting's award could go well beyond half a million dollars, once interest and attorney fees are tallied. Mrs. Ernsting was represented by Joseph A. Golden and Megan Bonanni, from the Law Firm of Pitt, McGehee, Palmer, Rivers & Golden, P.C. 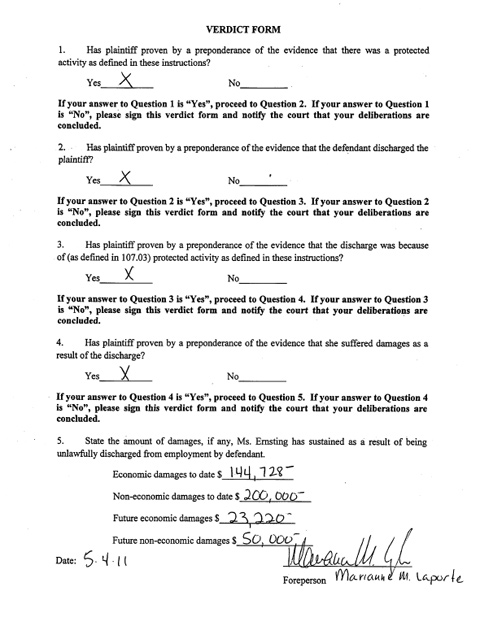 The following excerpt from an article published on Feb. 9, 2010 in The Detroit News further describes the circumstances of this case:

"It's been two years since a state appeals court panel approved her case, ostensibly clearing it for trial."

The Ave Maria lawyers resisted: They appealed to the state Supreme Court, which declined to hear it. They filed a motion arguing Ave Maria is entitled to an obscure "ecclesiastic abstention" that makes the college immune from secular court review, which was denied by a judge. In other court papers, lawyers argued Ave Maria College can't pay a proposed settlement because its assets have been transferred to Ave Maria University in Florida."

In 2004, as director of development, financial aid and public relations at the Ypsilanti college, Ernsting found herself caught between U.S. Department of Education investigators who said she was required to provide them with financial aid information and Ave Maria officials who urged her to say [sic] silent.

She says she provided information because it was the right thing to do. Days after the government told the school it would be fined for failing to comply with financial aid and certification laws, Ernsting was terminated and told her department was being eliminated.

Ultimately, the school paid almost $260,000 in fines and fees for its lapses. Since then, Ernsting has sought to prove, in court, that her firing wasn't a result of Ave Maria's move out of Michigan but was a retaliatory measure. She's suing for an undisclosed sum."

Who is Cardinal Levada?

As Prefect of the Congregation for the Doctrine of the Faith, Cardinal Levada has the duty "to promote and safeguard the doctrine on the faith and morals throughout the Catholic world: for this reason everything which in any way touches such matter falls within its competence" — according to Article 48 of the Apostolic Constitution on the Roman Curia, "Pastor Bonus," promulgated by the Holy Father John Paul II on June 28, 1988.

1. Based on your responsibilities as described above — as the Prefect of the Congregation for the Doctrine of the Faith, how do you justify honoring Ave Maria University? — given that Ave Maria University has never received official Catholic recognition from the local ordinary, Bishop Frank J. Dewane.

Which doctrinal document in the Congregation for the Doctrine of the Faith allows this type of honoring?

Ave Maria University does not even call itself "Catholic" on its own website.

2. Why are you honoring an institution which violated the law? — as determined by a jury. Have you considered the pain and damage suffered by those who have opposed Tom Monaghan's ideas and rules — only because they wanted to do what is right and legal? The money awarded by a jury does not erase the internal scars left behind by these injustices.

Which doctrinal document in the Congregation for the Doctrine of the Faith tolerates the honoring of an institution which committed an unlawful act? — particularly when said institution is not even recognized as Catholic by Church authority.

3. How can you justify honoring Ave Maria University, which has never received official Catholic recognition, yet claims "ecclesiastic abstention" when victims seek justice.

Which doctrinal document in the Congregation for the Doctrine of the Faith tolerates a claim of "ecclesiastic abstention" by an institution with no official Catholic recognition?

4. How do you justify honoring Ave Maria University, where a building has been erected in honor of Tom Golisano — a man who has given millions of dollars to help extreme left-wing, pro-abortion politicians get elected, including Barack Obama. The honoring of Tom Golisano has taken place in violation of the United States Conference of Catholic Bishops (USCCB) as follows:

The Catholic community and Catholic institutions should not honor those who act in defiance of our fundamental moral principles. They should not be given awards, honors or platforms which would suggest support for their actions." — From Catholics in Political Life (USCCB 2004).

Which doctrinal document in the Congregation for the Doctrine of the Faith tolerates this violation?

Cardinal Levada, this weekend you too will walk through the doors of the "Golisano Field House" for the commencement ceremony — and you will experience the erosion of what it means to be "pro-life" in Monaghan's Ave Maria world.

5. Cardinal Levada, have you considered what the former law professors from Ave Maria School of Law had to endure when they did not go along with Monaghan's program?

I have been vilified and ostracized — for standing firmly by my Catholic principles — as I question , through my articles, Ave Maria University's choices and decisions, which also affect the Town of Ave Maria. The town was built in a symbiotic relationship with the university. Ave Maria, as a real estate development, was widely advertised as a "university-town" — with Ave Maria University as the first "Catholic" University in America in 40 years.

"I fear that all of us (to different degrees) are participating in something that we may later deeply regret," — namely selling to young people and their families [an] educational product that we do not have sufficient reason to believe can be delivered." — Matthew Levering, former Ave Maria University professor.

It is no surprise that Ave Maria University has not been recognized as "Catholic" by the local Bishop.

But Ave Maria University is not the only one who has committed an unlawful act.

Cardinal Levada also seems to be in violation of rules that prohibit tolerance of the homosexual culture in the Church. Rules that he has a duty to enforce. 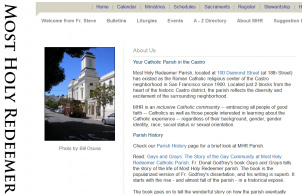 Cardinal Levada, I would also like to take this opportunity to present some questions regarding your own background and activities as former Archbishop of San Francisco, and as Prefect of the Congregation for the Doctrine of the Faith.

I will begin by quoting the following document:

CONGREGATION FOR THE DOCTRINE OF THE FAITH

"Special attention should be given to the practice of scheduling religious services and to the use of Church buildings by these groups, including the facilities of Catholic schools and colleges. To some, such permission to use Church property may seem only just and charitable; but in reality it is contradictory to the purpose for which these institutions were founded, it is misleading and often scandalous." — Signed in Rome by Joseph Ratzinger, on October 1, 1986, when he was Prefect of the Congregation for the Doctrine of the Faith.

In light of the above statement — how do you justify your tolerance of homosexual-friendly activities at Most Holy Redeemer Parish in San Francisco, during the time that you were Archbishop in that city?

You have been Prefect of the Congregation for the Doctrine of the Faith since 2005. As such, how do you justify your tolerance of homosexual-friendly activities at Most Holy Redeemer in San Francisco since assuming your current position?

As you are well aware, even the "Red Chic and Leather" homosexual award event found a welcoming venue at Most Holy Redeemer Parish's Ellard Hall.

Here is an excerpt from California Catholic Daily:

Among the recipient's of this year's Motorcycle and Leather Community Awards was the drag queen performer, Donna Sachet, who received the "Entertainer of the Year" Award. Sachet was Miss Gay SF in 1993, elected Empress of SF in 1995-96, has been national spokesmodel for Smirnoff Twist Vodka, and was granted Sainthood by the Sisters of Perpetual Indulgence in 2004. (Feb. 20, 2008)

The Sisters of Perpetual Indulgence, a drag queen group which mocks Catholic morals, played bingo for years at Most Holy Redeemer, until approximately five years ago — when faithful Catholics across America began to express their disgust.

Which doctrinal document in the Congregation for the Doctrine of the Faith tolerates such offensive presence on Church property? 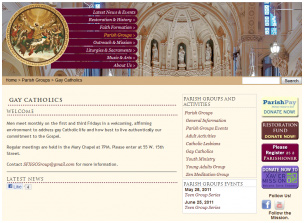 How do you justify your tolerance of homosexual-friendly activities at St. Francis Xavier Parish in New York — given your position as Prefect of the Congregation for the Doctrine of the Faith?

Are we to understand that these two homosexual-friendly parishes have been institutionalized by the Catholic Church? Is this Vatican policy?

Cardinal Levada, allow me to present the following video, which involves the rededication of St. Francis Xavier Parish in New York, by Archbishop Timothy Dolan, in September, 2010. Homosexual groups are publicly presented to Archbishop Dolan inside the church. 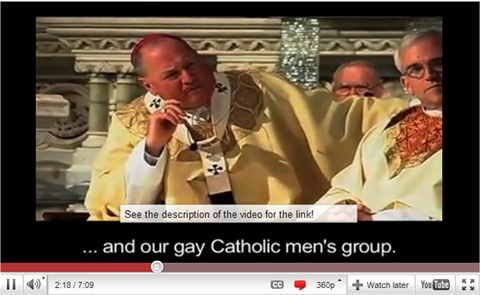 A jury has delivered a verdict finding Ave Maria University liable for an unlawful act.

But who will deliver the verdict on Cardinal Levada?

This Man Has Given Millions to Pro-Abortion Politicians. This Man is Honored at Ave Maria University.

Pie in the Sky (Washington Monthly)

Gays and Grays: The Story of the Gay Community at Most Holy Redeemer Catholic Parish

The Sisters of Perpetual Indulgence