November 1, 2013
"If we don't change our direction, we're likely to end up where we're headed." – Chinese proverb 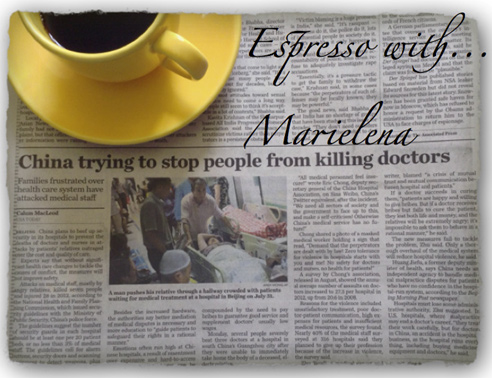 I am drinking my afternoon espresso, thinking about the Obamacare catastrophe – as I glance through different headlines. The failed launch of this monstrous government-run program should not be a surprise – and its 'interconnectedness' (that's globalization lingo) with Chinese "death" programs, is entirely palpable.

Americans are facing the reality of socialism – as it aggressively manifests itself – and socialist operatives reap the "fruit" of their decades-long perseverance and dedication to the subjugation of the United States of America. The disastrous start of Obamacare is just a glimpse of what's to come.

Let's take China as an example – where doctors and nurses are being killed by angry citizens who can no longer tolerate the incompetent and callous government-run "death" system in hospitals and medical facilities.

China has been the long and cruel probe of socialized medicine – now being implemented on a global scale.

The consummate communists at The Rockefeller Foundation have been busy designing "planetary health policies" by funding and collaborating with the Global Health Summit China, which was held on January 26-27, 2013 in Beijing.

Excerpt from The Rockefeller Foundation website, where they boast about their centennial in the field of "public health":

"In January 2013, the [Rockefeller] Foundation and Peking Union Medical College (PUMC) held in Beijing China, a Global Health Summit.... The two hosts each brought a one hundred year track record in public health."

While the Communist Chinese death system implodes – The Rockefeller Foundation "dreams" of "planetary health policies" in the government board rooms of Beijing – in order to fulfill its One World government objective. Here is an excerpt from the aforementioned white paper. Grab another espresso – you will need it. Bold added for emphasis:


"Opening a window to the future...

It is a warm Wednesday in January 2050 in Santiago. The newscaster is reporting the latest performance figures for the city, and Ana frowns as she hears that wellbeing and air quality have both dropped a few points. In the centenary year of the landmark Doll and Hill study on smoking and lung cancer this is not good for public relations! She makes a mental note to discuss this with the City Forum later in the day. For now she has to prepare for a visiting delegation from Tokyo, Lagos and Los Angeles who have come to finalise [sic] the protocol connecting the electronic data and remote sensing systems for maintaining population health across their mega cities. Ana has kept in touch with them online in the peer to peer learning platform as they all connected years ago to the same cyber-engineer supporting their 3D vaccine printers. With Saito from Tokyo, Meng from Lagos and Raúl from Los Angeles she had many long debates over the years on issues ranging from how to rebuild solidarity, to what the priorities should be for planetary health..."


This "window to the future" has a very dark past.

The Rockefellers' involvement in barbaric experiments involving human beings goes back to the 20th Century, when The Rockefeller Foundation helped fund and develop various eugenics programs – including the one where Josef Mengele received his training – in order to conduct his diabolical human experimentation in Auschwitz.

The Population Council, founded by John D. Rockefeller III, has advanced depopulation programs inimical to the well-being of entire populations in Africa and many other parts of the world. The Population Council has had major involvement in the distribution of contraceptives – and has held the license for contraceptive devices, as part of its aggressive international "reproductive health" initiatives. Indeed, the centennial of The Rockefeller Foundation can take credit for the death of millions of human beings, through several generations – as a result of its abortion and abortifacient campaigns.

The Rockefeller Foundation ranks as one of the most influential NGOs (non-governmental organizations) in the world – and joins others, like the Melinda and Bill Gates Foundation, in an international depopulation effort, under "smart globalization." As my readers know by now, anything "smart" in modern parlance is related to Sustainable Development – the United Nations socialist initiative of global governance, also known as Agenda 21.

Obamacare: Made in China

"The social experiment in China under Chairman Mao's leadership is one of the most important and successful in human history. How extensively China opens up and how the world interprets and reacts to the social innovations and life styles she has developed is certain to have a profound impact on the future of many nations."

Under Mao, it is estimated that 50-70 million Chinese citizens went to their deaths, through forced abortions, forced labor, executions and starvation – as a result of his infamous social experiment, known as the Great Leap Forward.

The "profound impact" resulting from "Chairman Mao's leadership" has indeed been felt. It's called Obamacare. 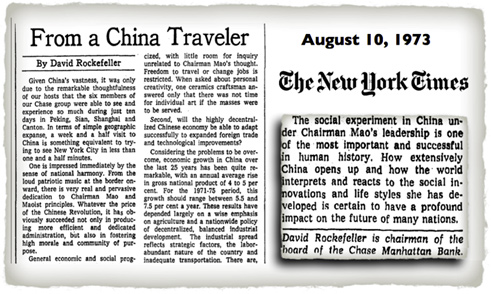 So Americans will be joining Ana, Saito, Meng and Raúl – because the present looks very bad – and the year 2050 looks even worse in Washington DC, as the components of the Sustainable Development socialist machine, which makes up the bulk of our "globalized" public policies, continue to move into fifth gear.

Only God can save the United States of America.