Marielena Montesino de Stuart
FRANCIS IN THE VATICAN: "... I have known many great people who professed Marxism" 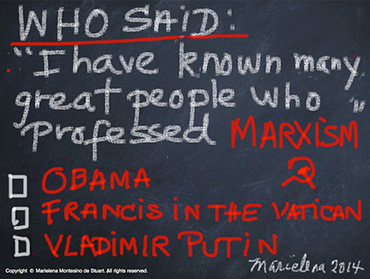 I am receiving expressions of deep sadness, mostly from young Catholics, who have read Francis's latest interview in the Italian press.

By now my readers know that Francis's interviews are legendary. But the most peculiar aspect of his friendliness towards journalists is that he appears to gravitate towards those with "progressive" persuasions.

Why is it that Francis does not answer the questions posed by traditional Catholic journalists, including an extensive archive published by this writer, involving his actions as a former Cardinal in Argentina – as well as his actions since his election as the Bishop of Rome?

The following transcript of Francis's latest press interview has been translated from Italian into English – and published by CNS (Catholic News Service) – the official press entity of the Catholic Bishops. The original interview was conducted by the Italian newspaper Corriere della Sera. I always recommend to those of you who can read Italian, to peruse the interview in its original form.

A Catholic with proper formation should be asking many questions regarding Francis's statements in this, as well as other interviews that he has been involved in. I'm talking about questions such as:


Since when does a pontiff need to run around granting multiple interviews to the press? This is not a pontifical tradition. Oh, I forgot, Francis is not a traditionalist. Sorry.

Is this tendency towards multiple press interviews a way to throw a veil over the on-going crisis of sexual abuse in the Church – by appearing to be in a constant open "dialogue"? The reader will notice that the journalist from Corriere della Sera referred to the rampant corruption in the Church as follows:

"The scandals that rocked the life of the Church are fortunately in the past."

Fortunately in the past?

The corruption ("crisis") in the Church is overwhelming and on-going.

The journalist went on to refer to the sexual abuse of children by members of the clergy, as a "delicate theme."

Pederasty, which makes up the majority of sexual abuse cases in the Church, is a crime of horrific proportions. It is NOT a "delicate theme."

Francis defended the Church's handling of the sexual abuse of minors by stating the following:

"The statistics on the phenomenon of the violence against children are shocking, but they also show clearly that the great majority of abuses take place in the family environment and around it. The Catholic Church is perhaps the only public institution to have acted with transparency and responsibility."

So those faithful families who trusted that their little boys would be safe in the company of priests, while serving as altar boys and performing other activities in the life of their parish, need to blame the sexual abuse of their children on the "family environment and around it" – and not on the pederasts that were allowed to remain active as priests?

If the Church's administrators have any interest in transparency and responsibility, why is it that they spend millions of dollars in legal fees and in public relations consultants, in order to maneuver the cover-ups of homosexual priests and pederasts – and to deny or stall justice for victims of sexual abuse?

Really, Francis? This is the epitome of adding insult to grave injury!

When is Francis going to bring an end to the very public life enjoyed in the Church, by retired Cardinals like Roger Mahony in Los Angeles, who has one of the most horrendous records of sex abuse cover-ups in the history of the Roman Catholic Church? Instead, Cardinal Mahony appears to enjoy boasting (through his Twitter account and his blog) about his recent visit with Francis in Rome.

When is Francis going to denounce other Cardinals and Bishops similar to Mahony?

Why is Francis persisting in downplaying the nature of Marxism – considering that over 120 million people have been exterminated as a result of this evil ideology? The death toll continues in Cuba, China, North Korea, Laos and Vietnam – as well as in other satellite socialist countries in Africa and Asia.

When asked about accusations of Marxism, Francis replied [excerpt]:

"I have never shared the Marxist ideology, because it is not true, but I have known many great people who professed Marxism."

Francis, THERE ARE NO GREAT MARXISTS!

Who cares that Francis does not believe in Marxism!

What matters is the fact that he praises people who profess to be Marxists!

Who are the "many great people" that Francis knows, who profess to be Marxists? Is one of them Francis's friend, Cardinal Hummes from Brazil?


Catholics should be asking many more questions after perusing this latest interview.

Christ the King, Our Heavenly Mother, Joan of Arc, St. Jude, Saint Anthony of Padua – and all the Saints in heaven, please intercede for Holy Mother Church, and for us, during these dark times. Help bring back reverence for the Eucharist and the teachings of Holy Mother Church, through our sacred traditions.

It is not much to ask.


|||||||
Please click HERE for reference section and for submitting comments.

Please click HERE for copyright terms and conditions, as well as instructions for quoting excerpts of this article.