While watching your show last night I was taken aback by the statement by Steven Bucci Ph.D., Director, Douglas and Sarah Allison Center for Foreign and National Security Policy of the Heritage Foundation:


BUCCI: It's a very visceral thing. It goes back in some cases the far right an alignment with Nazism. The far left with strong Communism – both of whom hated Jews and persecuted them. So the connection is still there. (Emphasis added)


I took further umbrage when you failed to challenge or correct him on the Nazi-Right connection.


O'REILLY: But why? Why did the Nazis and the Communists select the Jews? Because I think our audience in America needs to know the historical perspective. Why were they singled out?


The historical context of left and right wing came out of the French revolution as those who sat in the right wing of the Assemblée Nationale as "conscientious defenders of the constitution."

The far left received much of its inculcation from Karl Marx; the Marxist roots of anti-Semitism were spawned out of Marx's 1843 book "On the Jewish Question" and Marx was a major influence on Hitler writing "Mein Kampf." It should be noted that both the Communists and Nazis were both anti-Jewish and anti-Christian in addition to being racists. While the Communists were allegedly atheistic in nature, there is ample documentation that many of the senior Nazis were also high ranking members of the Thule Society a well-documented occult organization, and a number of books have been published on that subject. Likewise the 1995 book "Pink Swastika" documents the homosexuality in the Nazi party; the well-researched documentation in that book was responsible for the gay activist community to drop the inverted pink triangle (a Nazi death camp symbol) and "Gay Holocaust" myth in favor of the rainbow flag.

While the Nazi's were right of the Communists, making the Nazi/Right connection merely adds more fuel to the fires of venomous hatred and animosity that the left in America directs towards the Tea Party. Furthermore your interview completely avoided the truth about the real roots of anti-Semitism in the Middle East namely Muhammad Amin al-Husayni the Mufti of Jerusalem, who lived in Germany during WWII as a guest of the Nazi's who called him the "Fuhrer of the Arabic World," and fails to mention the Muslim Brotherhoods role or the Mufti's close kin and mentored protégé Abd al-Rahman abd al-Bauf Arafat al-Qud al-Husseini aka Yasser Arafat. 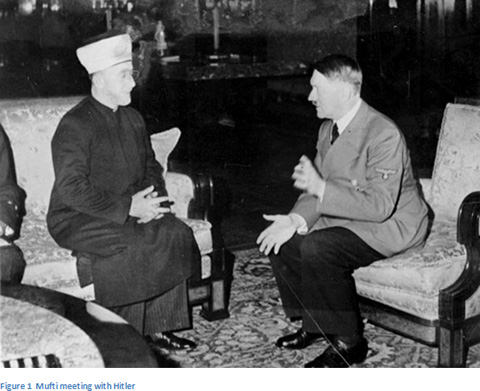 Nor for that matter does it mention CAIR that was founded by the Muslim Brotherhood and goes out of its way to sanitize the Islamist threat that has established significant beachheads in the USA in places like Dearbornistan. There are beachheads of Jihad and anti-Semitism in Europe today in major cities like Brussels where Islamists imams are openly candid about "ruling the world" quote "democracy is the opposite of Islam."

Given it has been estimated that by 2030 the majority of the population of Brussels will be Muslim, will the dwindling minority be given the same options as the remaining Christians in Iraq under the hands of ISIS? "Leave, pay a servitude tax or face the sword"

But even if the links have become distant from each other, and even if the obstacles erected by those who revolve in the Zionist orbit, aiming at obstructing the road before the Jihad fighters, have rendered the pursuance of Jihad impossible; nevertheless, the Hamas has been looking forward to implement Allah's promise whatever time it might take. The prophet, prayer and peace be upon him, said:

The time will not come until Muslims will fight the Jews (and kill them); until the Jews hide behind rocks and trees, which will cry: 0 Muslim! there is a Jew hiding behind me, come on and kill him! This will not apply to the Gharqad, which is a Jewish tree (cited by Bukhari and Muslim)


The media are stoking the fires of anti-Semitism by focusing on the killing of the Palestinians that Hamas uses as human shields and blaming Israel and the IDF while downplaying and ignoring the 600,000 being displaced by another Islamist threat ISIS in Iraq or the persecution of Christians and Jews worldwide, Perhaps you would do well to listen to my dear friend Philip Riteman on this video, the only member of his family to survive concentration camps like Auschwitz. Quote"20 million Christians died, nobody talks about them"

Bill you and Steven would do better to examine the Nazi roots of Islamic anti-Semitism and start to expose the funding network that for example funded the millions of dollars of tunnels from Gaza into Israel or where Hamas has been getting its money in general while people on the Gaza Strip starve, and stop placing anti-Semitism ( A term which has its roots in late 19th century Germany) in the left and right political spectrum and expose it as pure evil and hatred that transcends all geopolitical boundaries. Failure to do so will eventually lead to a Christian Holocaust once the Jews are exterminated not unlike Maurice Ogden's poem the hangman. "He who serves me best...Shall earn the rope on the gallows-tree."