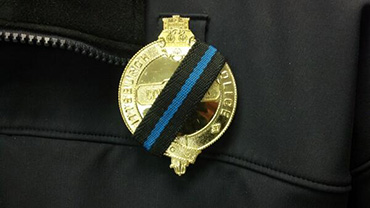 PITTSBURGH, Pa (1/7/14). The humanity of dogs was spectacularly confirmed this morning when a full fledged funeral was conducted for Rocco, a K-9 Officer who was killed in the line of duty.

Lewis Rush, a 21 year old misfit who had failed to register as a sex offender was wanted on probation and parole violations. When police made contact with him. Rush violently fought the officers, tried to grab the gun of one, then fled to a building on Butler Street.

When he seemingly vanished, Rocco found Rush hiding in the basement and as cops approached, he produced a 6-inch folding knife and stabbed Rocco in the back, damaging muscles, shaving off a chunk of bone in the spinal column and lacerating a kidney. Rush also managed to stab Rocco's handler, Officer Phillip Lerza in the shoulder. Rush was arrested on the spot.

Even though Officer Lerza was painfully wounded, he first took his beloved partner to Pittsburgh Veterinary Specialty & Emergency Center (PVSEC) in Ohio Township to get help for him as quickly as possible. Then after Rocco was being stabilized, Officer Lerza was treated for his own stab wound.

When WPXI-TVs Facebook page told that Rocco needed blood, an overwhelming number of people brought their dogs to the PVSEC to help Rocco. Officer Lerza stayed by his dog's side throughout. Rocco survived surgery and other injuries, then developed pneumonia. He had fought valiantly for his life but died two days later.

Following Rocco's death, according to Courtney Brennan of WPXI TV, an emotional group of K-9 handlers and their K-9 officers, along with other police officers, lined the walkway outside the veterinary center, all at attention and saluting when a Bag Piper led the way as Rocco's body was taken out of the hospital with an American flag draped over him, and put into a van. Flags were lowered.

There was to be a closed funeral service, but following an outpouring of public sympathy and support, Officer Lerza decided on a public service at Soldiers and Sailors Memorial Hall. And the place was packed.

People lined the streets this morning as the funeral procession went by. Helen Trautman a frequent contributor to this column who kept us up to date during the past few days, watched the processional from a second floor conference room.

According to Chris Togneri, reporter for the Pittsburgh Tribune Revue, "The funeral began at 11 AM (EST). As bagpipers played, a procession of uniformed police officers wearing white gloves carried a large plaque displaying Rocco's photo followed by a box containing his cremated remains into the hall."

Police officers, their K-9 partners, politicians and residents who simply love dogs, wanted to say goodbye to Rocco. K-9 units lined the walkway to the building.

It was a full-fledged funeral service opening with:

Reading of the Role of a Dog by Retired Sgt. Christopher Micknowski, Canine Instructor

After the Presentation of Colors, the Recessional left the Hall. A very proper tribute to Man's Best Friend. We would like to encourage pastors to consider having services for pets and offer counseling to those in your congregations who have lost a pet. This will be more appreciated than imagined

St. John 15:13 says: "Greater love hath no man than this, that a man lay down his life for his friends."

Isn't it true that dogs exhibit that same love to always protect, defend, love and lay down his of her life at anytime for the ones they love? It is such a God-like quality that it should be no surprise that God, spelled backwards is.....dog.