September 1, 2014
LABOR DAY WEEKEND (7/31/14) – As Americans celebrate Labor Day with partying, barbecuing, and visiting with family, one American [who] will be NOT be with family, is languishing in a Mexican prison. And this is not JUST an American. Sgt. Andrew Tahmooressi is an honorably discharged United States Marine. So how did he wind up in a Mexican Prison? 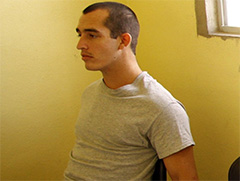 Sgt. Tahmooressi was in the process of moving, stopped at the border, parked in a U.S. side commuter parking lot, walked across the border to visit Mexico for the day, then came back to get his car and proceed to his destination.

Coming out of the commuter parking lot onto the confusing highway system there, he accidentally drove into Mexico. He tried to turn around to come back across the border and was promptly arrested. Among the possessions he was moving in his car were three collector antique firearms. That was all they needed to seize him and throw him into prison

According to Joe Otto of Conservative Daily, a news site of Daily Sanity, the former marine sergeant was denied a translator upon his arrest. Without a translator, he had no idea what he was even being charged with.

The arresting officer used a pre-signed search warrant. This means, according to Conservative Daily, that a judge signed an entire stack of warrants so that Mexican officials could fill in the details later when they could be used.

What is worse, according to Joe Otto, American citizen Andrew Tahmooressi has been beaten, stripped naked and chained to his bed and almost assassinated while in Mexican custody.

This American has been imprisoned for more than 153 Days and the Obama Administration REFUSES to do anything about it. Obama certainly is not about to interrupt a vacation or golf game to take needed action as any real president would. He would not even interrupt a personal meeting with Mexico's President, Enrique Pena Nieto to even bring the matter up!!

This American Citizen who also served in the U.S. Marines, had done nothing wrong. Yet the country he put his life on the line for, will not lift one finger to bring him back home.

It is up to us. Mr. Otto suggests that each American send an email, fax, or phone all fifty Mexican Consulates in the U.S. demanding his release. Also every Congressperson and Senator. To read Mr. Otto's complete story go to:

Mexico cannot have it both ways...open borders for undocumented Mexicans to come into this country by the thousands for the benefits and jobs in order to send money back to Mexico, yet arrest a U.S. Citizen who accidentally crossed the border and immediately turned around to come back.

IT IS TIME TO BOYCOTT MEXICO.

Please Americans, do not do an Obama. DO interrupt your Labor Day celebrations to take action for an American Hero who needs our help. It would be irresponsible to do anything else or to mimic any lack of action by that fraud in the Oval Office who cares absolutely nothing about American Citizens.

Only WE can free this marine with an avalanche of faxes, emails and phone calls to all authorities.