Rev. Austin Miles
Gay celebrant: This is just the BEGINNING! 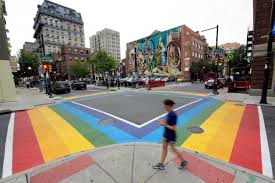 Like a conquering army thundering through the cities and towns of the former United States, the invaders planted their rainbow flags on municipal buildings, city halls, even above The White House itself, as a symbol of their conquest of America. Homosexuals and transsexuals danced in the streets. Those flags are still flying.

The American Flag has been transformed to one with stars, but instead of stripes, has the rainbow colors. Yes, they have hijacked our flag in the process.

In a remarkable demonstration of fleeting time, mobs gathered throughout the land only minutes after The Supreme Court ruled that same-sex-marriages are legal. To arbitrarily reach that decision, the court ignored the Constitution and will of the people by granting full marriage rights and privilege to those who simply do not qualify. However, legal, (Power-of-Attorney) partnerships? Yes. But defining the relationship as marriage? No.

The city of Seattle quickly painted 11 major crosswalks in that city with the rainbow colors of the homosexual flag. This immediate re-structuring of their crosswalks cost the taxpayers $66,000, then adding the labor costs for the transformation and permanent upkeep of these displays, upped that amount to $100,000, paid for by our money. They intend for the gay pride crosswalks to be permanent.

In Minneapolis, the sides of major bridges were bathed in rainbow colors, major sports events had rainbow flags raised in the stadiums while newspapers every day since, have had major front page stories with photos of the "gay" victory.

One celebrant joyfully exclaimed: "For the first time in my life, I feel normal." Really! A Supreme Court Ruling can accomplish that? WOW!

However, as quoted by several in newspaper accounts, "This is just the BEGINNING." It has already been announced that any church that will not open up its facilities for same sex marriages or any pastor who refuses to officiate at one, will be stripped of their 501c3 tax exemption. In Idaho, it is worse, as pastors who refuse to perform these nutty nuptials will be jailed. Even more troublesome, moves are already underway to declare the Bible as a book of hate speech that must be removed from view and destroyed.

Next in the planning stage is to legitimize and recognize what the LGBT community describes as, "intergenerational sex." This means, legalizing homosexual sex between adults and children. Efforts started long ago to see this passed. A homosexual organization called, NAMBLA, the North American Man Boy Love Association is behind this outrageous push.

Years ago, I tried to get a 501c3 tax exemption for this ministry, which is a very effective community outreach, including crisis counseling, suicide prevention (which has a 100% success rate) and assisting the homeless. We are a 24/7 ministry to the community

The IRS made me jump through incredible hoops, demanding excessive information that nobody could provide. This went on for over four months. Then they said that in order to proceed I would need to send them $400.00 to process the application. For me, four hundred dollars was a huge amount of money that I could barely afford. But the amount was sent to them as demanded; they cashed the check, and then notified me that the application had been rejected. They refused to give me a refund.

At that very same time, NAMBLA applied and immediately received their tax-exempt status. That made them free to hold meetings at public library meeting rooms without cost (close to where children are present), and enables that sick organization to be tax free, yes, to pay no taxes.

This is indeed just the beginning as the newspapers proclaim. The LGBT community will never be satisfied until they totally rule the churches and the schools as well as the film and TV industries and that we yield to them in all matters.

So now we must learn to deal with these drastic changes of society. When one of two males is identified in a newspaper or TV program as, "His husband," or one of two women identified as "Her wife," we simply must accept this even though this might take some getting used to.

When a 'woman' speaks in a man's voice, or a' man' with a woman's voice, well, this is just life doncha know. Let us not be startled by it. Otherwise that might signal disapproval. We can't have that in a society of equality.

When a man goes into a woman's bathroom or shower declaring that this is the gender he identifies with, well...we just gotta get over it. Let them go to the girl's locker room and shower with high school girls. This is the new normal. Society has simply changed with the times. And we are supposed to do the same.

Romans 1:24 states: "Wherefore God also GAVE THEM UP to uncleanness through the lusts of their own hearts, to dishonor their own bodies between themselves." (caps mine) When one continues in sinful lusts that God forbids, He will give you over to your sins, meaning they will consume you and take you right to hell. The scariest part of that verse is; God gave them up!

No matter what they do or how America spirals downward, or how they affect society, these ungodly evildoers cannot put Jesus back in the grave. He is here to stay right to the end.

As Christians, we cannot despair. On the contrary we must rejoice. The Bible declared hundreds of years ago that these things will happen as the times come to a close, leading to the end of the world and the return of Jesus. Evil will then be completely destroyed.

Extra thought department: Perhaps those who have gender reassignment surgery to become a woman might consider being an organ donor, giving their testicles to the Republicans in D.C. They really need a pair.