September 4, 2015
DANVILLE, California (9/3/15) – The Obama Administration quickly cleared the way for an Iranian "gay" to be granted asylum in the U.S. This newest arrival, named, Mohamad, would not give his last name for fear of reprisals. He talked of the risks of being a "gay" man in Iran. "I cannot very easily be "gay" in Iran," he stated. "I have to hide to live in Iran."

Many countries believe that homosexuals are harmful to society, exhibit an immoral lifestyle, are dangerous to children and are considered degenerates. Plus they pose a health risk.

An Iranian American pastor is in prison in Iran even though he has committed no crime. Obama has no interest in speaking out for his release, even though he had the opportunity while meeting with Iranian leaders who have chanted "Death to America," yet want sanctions lifted against them as they build the nuclear bomb that they intend to use to obliterate Israel and the United States.

The reason for the meeting was to discuss an agreement with them that would allow inspectors to visit the site where the nuclear bombs are being constructed. They deny that they are making bombs but say they really are enriching uranium for peaceful purposes. They would, however, agree to having inspectors come to the site as long as sanctions are lifted, bringing $150 BILLION to Iran which has demonstrated to be a sworn enemy of America.

As for the nuclear development, they have said they will have Iranian officials inspect the site to ascertain that the nuclear erector set will be only for peaceful purposes. How's that again? AND OBAMA IS FALLING FOR THIS. Foxes and hen houses come to mind.

During discussions of this meaningless treaty that they want the U.S. to sign, not one word came from Obama about an American Citizen, Pastor Saeed Abedini, who is languishing in their prison. Not a peep about that from Obama during his visit.

However, the sodomite from Iran who was ushered into America, unveiled this interesting scenario: Now get this: Mohamad was assigned to the United States by the United Nations and to JFCS, one of nine national resettlement agencies provided by Obama's State Department.

After being put on a plane (our expense) he was met at San Francisco and put in a Franciscan Retreat in Danville, California. There, in that Catholic retreat, Brother Mike Minton stated, "He's fit in perfectly." No doubt about that." While Americans toil to earn living expenses, Mohamad's living expenses are paid for, with our tax money.

In America, under the leadership of the occupier of the Oval Office, working citizens are forced to not only accept sexual deviancy, but are under severe pressure to not only assist them in their perversion but to be active in promoting it.

In Morehead, Kentucky at this moment, Rowan County Clerk Kim Davis, a devout Christian is facing a year in prison, plus a steep fine for refusing to issue a marriage license to same sex couples. JUST IN: Today the clerk, Kim Davis was jailed for 'offending gays.'

In Oregon, Aaron and Melissa Klein's bakery was shut down after the husband and wife team refused to bake a wedding cake for a same-sex duo. They were willing to bake the cake but not write the gay message demanded on that cake. This would be, according to their deeply held beliefs, affirming something that God declares a sin.

What is more, there were plenty of bakers in that area who would have baked the cake with the message.

The couple was fined $135,000 and if that amount was not paid within days, the Human Rights Agency threatened to seize their home and belongings. Yes, to destroy them even though they have worked hard and honorably all of their lives and were taxpayers.

When the Supreme Court ruled that same sex marriages were legal and a human right, Obama had the White House bathed in rainbow colors to celebrate that decision. Why?

He has welcomed homosexual groups into the White House but never a group of Christians. And it looks like he has Pope Francis on his side. This pope, whose statements mirror the Communist Manifesto, praised a homosexual-themed children's book.

Here is a link to that as reported by Exposing Modern Mugwumps, the news site of Kelleigh Nelson: http://fellowshipoftheminds.com/2015/08/31/pope-francis-praises-homosexual-childrens-book/

This pope is obviously the last pope, as predicted by St. Malachy in the 12th Century. He said that the 112th pope, after him, would be the last pope. Readers, we are now there. At the finale of the world, the prediction is that this final pope will be the False Witness, and that the anti-Christ will be revealed, even though a lot of us have figured that out.

Who else and what else is playing a leading role here? Obama is a Communist and was placed (not voted) in the Oval Office. It was the Communist Party USA (CPUSA) who shoe-horned him into that office. This has all been confirmed on the CPUSA website which we have explored.

One of the goals is to weaken America to pave the way for communist rule of America. The 26th goal stated is to: 'PRESENT HOMOSEXUALITY, DEGENERACY AND PROMISCUITY AS 'NORMAL, NATURAL, HEALTHY.' Here is the link to those goals as presented before the United States Congress in Washington, D.C. http://www.uhuh.com/nwo/communism/comgoals.htm .

This gay transformation of Society was not a natural evolution of events. It was all carefully orchestrated. This is why Obama was part of the silent coup led by the Communist Party USA to take over Washington, D.C. Why was Obama a good choice? He was groomed from an early age for this assignment and yes, he is the first Gay to sit in the Oval Office.

This past week, a transgender high school student pretending to be a girl in Hillsboro, Missouri, demanded to be allowed to use the girl's rest room and locker room. Even though Associated Press describes him as "she" he still has his tool box attached, like Bruce.

It is ridiculous to refer to a female pretender who is a actually a male as, 'she.' This is not a legitimate courtesy. It is downright stupid. Perhaps if I told them I am Spider Man they will let me climb the Empire State Building.

When this mentally disturbed kid demanded to be in locker rooms with naked girls, 150 students walked out and parents joined them to put a stop to this nonsense. FINALLY people began to push back.

The reason this Marxist "gay" ploy to queer America has progressed to the extent it has, is precisely due to nobody pushing back. And that includes the spineless week-kneed politicians, especially Republicans, who hope to stay in office longer by not offending anyone in power with their votes.

And for God's Sake Pastors: PREACH THE BIBLE – biblical truth without compromise.

The official push-back has begun. THIS is why Donald Trump has grabbed the greatest poll numbers in the race for president. People want someone in the Oval Office who is angry at what is happening to our country and is ready to throw all political correctness out the window to put us back on track to rescue America.

Even so, from our view, it is possible that all election theatrics we are seeing is a skilled distraction to keep citizens from realizing that Obama plans to cancel the 2016 election to declare himself President (dictator) for life. 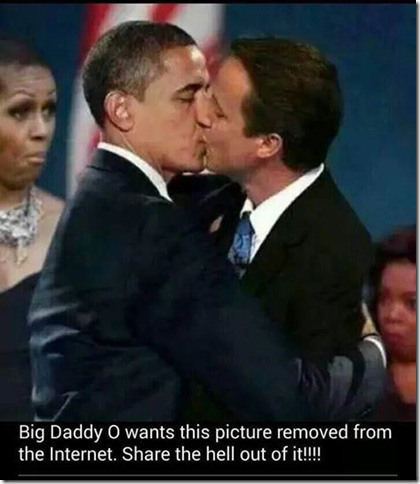 When Rev. Austin Miles was behind the Iron Curtain as a young man, he was personally briefed about how Communism would overtake America and how tearing down the morals of the United States would be an important factor. One thing they were pushing to be widely distributed in the U.S. was Playboy Magazine.

This photo was scrubbed from the internet by Obama, but we saw it before he did.