April 7, 2016
CHARLOTTE NORTH CAROLINA – 4/7/16 – Insanity is contagious. MilesTones is the first to confirm this phenomenon. It is not only contagious but can cause brain death. It is easily passed on from person to person. It seems that everyone in America is susceptible to the disease, no matter where they live. 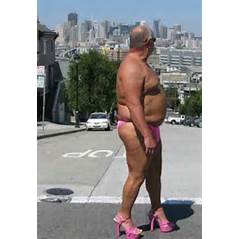 Since when is it "discrimination" to not allow men into public toilets for girls? That is where the greatest amounts of child sexual abuse take place. Allowing men into the girls locker rooms and showers just because they are wearing women's clothes and demand to be considered a woman?

This is exactly what we have playing out in North Carolina There is a strict law on the books that prohibits transgender people from using public bathrooms that do not match the sexes on their birth certificates. Yet now being a country under the rainbow flag, it is considered a "right" to use the toilets and showers of the opposite sex. The dike lesbians also demand entrance to the men's room, lockers and showers. It would be interesting to see how these women utilize a urinal, a feat that would require expert balance and aim.

Naturally, the Obama Administration is behind this and, according to the Washington Times, Obama declared that the fight for gay and transgender 'rights' is a continuation of the civil rights era. Really?

He has threatened the state by saying this; "Hey folks, we're serious here. We're not going to give you all this federal money if you're requiring discrimination in every corner of the state." Yep, they either cave into Obama's demands for perverts to have access to children's toilets or have any federal funding cut off.

Again, how can it be 'discrimination' to not allow men to go into the bathrooms of little girls? It is not discrimination, a highly political term, but wisdom to protect our children. Yet lawmakers are feverishly coming against us to penalize those who object to this issue.

Recently a man in his 50s, paunchy truck driver type, declared that he is a six year old little girl. He only wears the clothing of a little girl. Some knuckleheaded do-gooder family took him in their home to live and pampers this misfit. This is total insanity. I have seen people confined in insane asylums for this kind of mental disorder.

Then there is Bruce Jenner who decided that he was really a woman, had a cosmetic makeover and won "The Woman of The Year Award." It was a real treat to see him sashaying across the stage awkwardly in high heels while his tool box was swaying between his legs.

Yet the news media refers to him as, "her." As the insanity spread to others, everyone was referring to him as "her," knowing they could be legally penalized for not referring to him by his perceived gender identity. That's now the law, folks.

I almost wretch each time I read a news account of a same sex couple referred to as, "his husband," or "her wife." Yet, with the help of the leftist media, [those] who do not recognize the 'marriage' of two homosexuals or lesbians and do not want to participate in their ceremonies, are heavily fined, vilified in the press and are driven out of business.

In other words, the LGBTQ members can now make slaves out of all who have a business, forcing them to serve them in any way they dictate. This is indentured servitude.

It was in recent years that the Psychiatric Associations' Diagnostic and Statics Manuel of Mental Disorders (DSN-IV) changed homosexuality from a mental deficiency to a 'normal' behavior, due to building political pressure and by homosexuals who managed to get into the organization that publishes it and force the change.

Up until that time, Homosexuality, lesbianism and transgenderism, had been listed as S.S.A.D. meaning, Same Sex Attraction Disorder, a mental disease.

Those who support this aberration have been infected with insanity. Some years ago I visited the Ringling Museum in Sarasota, Florida. The Art Museum featured an exhibit by a photographer/artist I had never heard of, Robert Mapplethorpe. Walking into the exhibit was a stunning moment. All of his "art" centered on a man's penis in its various functions with homosexual overtones.

Outraged I said to a woman in charge, a very sweet-faced little old lady, "This is an insult! Why would you allow such an exhibit?" She gave this response: "Well the only ones who would be disturbed by this are those who are unsure of their own sexuality." Yes, this sweet little old southern lady had admonished me. It was all I could do to keep from backhanding her. Mapplethorpe, we understand, died of AIDS. Figures.

The do-gooders, who agree with the LGBTQ agenda do this to prove what good and understanding, compassionate people they are. Their ego has contributed to their insanity. "Why they are such sweet people," they coo.

The State of North Carolina has paid a price for objecting to sexual deviants demanding access to the toilets of little kids of the opposite sex. Obama has threatened to stop all federal funding to that state, which could break its back. PayPal stated it was pulling their business out of North Carolina which affected 400 jobs.

Google, Yahoo, Facebook, Twitter, Cisco Systems, Intel, Uber Technologies lyft, Salesforce.com, Dropbox, Airbnb, Pinterest Tumblr and IBM joined about 70 other high powered executives in attacking the measure as "bad for our employees and bad for business." Startups there have been cancelled. Movie companies said they will no longer film in that state and Bank of America has entered the fray.

And that is just part of it. Sporting events say they will not hold games there. All of this over rightfully limiting the bathroom options for transgender people to the sex they were born with and remain that sex. Yet they have made this an "anti-gay issue." That community is only 2 % of the population. So why do we allow that small group to push us around?

Yes insanity is a plague creeping over the entire United States of America, based on parents wanting to protect their children. The Insane Asylum is now run by the inmates.

Note to Pastors: Get children out of this sordid society by opening a Christian school where children learn about God, ethics, morality and are safe.

Note to Parishoners: Meet with your pastor to convince him or her to open a Christian school in your church.

Photo Caption: Coming to a Little Girl's Bathroom Near you