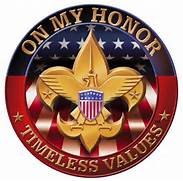 The revised Boy Scout motto today has transitioned to:

'On my honor I will do my best, to pervert myself and all the rest.'

Like every youth organization, the Boy Scouts of America (BSA) have acted as a magnet to draw in homosexuals where they are given unlimited access to little boys, providing a setting where they can secretly fulfill their uncontrolled lusts. These pedophiles, which prefer children, are forever on the prowl.

This Christian organization-BSA- was formed to teach strong leadership skills to boys, but as usual, this concept has become vulnerable to an influx of deviants who demand that their perversions be freely expressed wherever they please. Sexual misfits slipping into this character-building youth group is really not a new thing since homosexual scoutmasters have been around since the organization was founded over 100 years ago. Back then it was hidden.

The predators in those days were not of the limp-wrist variety or swishy. They were manly and athletic in appearance, like Cub Scout Leader John Brockdorf of Cub Scout Pack 62 in 1947 Salinas, California. He is now dead, killed in prison by prisoners.

Originally, the BSA, described itself as "provider of the nation's foremost character development and values-based leadership training, whose mission was to prepare young people to make ethical and moral choices over their lifetimes by instilling in them the values of the Scout Oath and Scout Law."

Here was the Scout Oath taken by all members who were expected to uphold all parts of this oath in their lives. (All emphasis' mine:)


On my honor I will do my best,

to do my duty to God and my country

and to obey the Scout Law;

to help people at all times;

to keep myself physically strong


Get that? This Christian organization was formed for the purpose of raising young boys to become responsible moral men, husbands and fathers. However this is the last thing that Satan (yes Satan) wants. His goal is sexual perversion, deviancy, and lawlessness and to completely abolish anything that honors God.

The enemy's specific goal is to get God out of everything, especially human thought. WAKE UP people, this is exactly what is taking place but we have all been brainwashed into being more 'open minded' and accepting, while being persuaded by the word, "inclusion," a word employed by liberals – yes Democrats – to manipulate the public acceptance of anything that comes down the pike, or up from the sewer.

The homosexual scout issue gradually began to rise as more and more atheists got into scouting. Then sin became more open and the Constitution was used to declare their "rights." They began to pressure the BSA into accepting confused 'gay' kids into their ranks which is a logical next step on the path to hell.

The Christian group began to cave in to political pressure. In 2013 – recruiting a 'gay' kid to be a plaintiff – they filed a "civil rights case" and won which now allows youth who identify as "gay" to openly be members of the scouts. Bit by bit the door was being pushed open wider and wider.

The attacks against this Christian organization began early and grew from there. Here is where it started: The atheists, who, cannot simply live and let live, slithered forth demanding that they be allowed to join the scouts without believing in God; with a trend-setting case that made headlines during the 1980's.

The case was brought by the Randall twins, Michael and William, both 10 years of age, who felt that they should be able to be a member of the scouts without having to affirm a belief in God. Indeed they refused to say the name, God, in their oath at the meetings.

Their father James Grafton Randall, an atheist lawyer, filed the complaint and won. Being an atheist would automatically violate the Scout Oath which didn't seem to matter. The twins became members.

They won their case opening the gates for various goons to make specific cases about their lifestyles and beliefs or lack thereof. They would do anything to sabotage American ethics and morality.

The Randall case was celebrated by atheist groups – and there are many – with the Randal Twins feted as heroes at the various atheist meetings and conventions. This writer personally witnessed this at an atheist meeting in Los Angeles.

They got a lot of press and became twisted celebrities. This was the first major victory against the Boy Scouts of America, which opened the floodgates to bring in more nutty cases. Again, don't forget that all of this came straight from the pits of hell.

After successfully winning the next case of allowing homosexual boys to become members, contrary to all stipulations of the Scout Code to live a moral life, the next case forced the BSA to lift its requirements barring scout leaders and employees who identified as homosexual. They were there all along, but now they wanted the world to know that they were sodomites, like it was a badge of honor, plus, a victory for 'the cause.'

And how those "gay" scout masters loved those unsupervised camping trips where they had all these little boys to themselves. The molestation's and rapes secretly began. Most of the rapes went unreported since many of the victims did not tell their parents. They were afraid they would be blamed for the assaults.

This writer was violently sexualized as an 11 year old by the Cub Scout Master, John Brockdorf. I was another who would be automatically in the wrong for whatever happened to me so I did not tell my parents. The assault was so violent that it tore the inside of my rectum, leaving the nerves exposed; causing horrific pain that lasted for years. The pain was so severe that I would cry going to the bathroom. It had the effect of severe torture.

This left me with lifetime problems and relationship problems. From that point forward, I mistrusted anyone in uniform and all authority figures even though I did wear a uniform when serving in the U.S. Army. My entire life was affected by this LGBTQ poster guy as is the life of anyone else who is victimized by these monsters, all of whom should receive life sentences, since their victims do.

Brockdorf was eventually found out by others and run out of town. He re-settled in New York City where he found employment as a travel guide for.....yes...kids.

He of course sexualized a young boy who was able to tell his parents who immediately had Brockdorf arrested. He went to trial where his young victim testified against him. Brockdorf was sentenced to prison where other inmates killed him. A proper ending.

And by the way, I DID, many years later, forgive Brockdorf which is a requirement for Christians. Especially for ministers. I did not know at the time that he had been killed, so the forgiveness was legit.

Now the latest attack on the Boy Scouts of America is a case allowing....now sit down... sexually confused transgender kids to become members of the boy scouts. This has just happened. Kids can state whatever gender they wish on their application and the BSA must recognize them as the gender they say they are no matter what their birth certificates declare. Talk about the inmates running the asylum.

This case came about through a confused little 8 year old girl who wants to be a boy. The parents, instead of getting her to a mental health doctor, pampered her little fantasies, brought that case to court and won. Again, this is AN EIGHT YEAR OLD GIRL. We wonder how that will work when they are all in the showers and on camping trips. Next little boys will say they are girls and join the Girl Scouts.

The organization said this in a press release regarding the admittance of transgenders to the scouting program: "The BSA is committed to identifying program options that will help us truly serve the whole family, and this is an area that we will continue to thoughtfully evaluate to bring the benefits of Scouting to the greatest number of youth possible – all while remaining true to our core values, outlined in the Scout Oath and Law." How's that again? (Emphasis mine.)

Remaining true to their core values as outlined in the Scout Oath and Law??? Who are they trying to kid? One rule for sure, deception must be accompanied by lies to make it work, which is the meaning of deception in the first place. But that last statement adds an EXTRA lie on the part of the scout leaders. Some example.

Get your children out of those hotbeds of sexual assault. Pastors, kick those bums out of your churches. Many homosexual Episcopal Churches are staffed by deviants wearing collars and of course, host boy scout meetings in their churches.

Homosexual Episcopal Churches is fact. I almost slugged one of those priests in New York City while a chaplain. How in the world can these perverts be accepted in seminaries, much less as priests and pastors? Have we all gone mad? Look what happened to the Catholic Church.

There are alternatives to the Boy Scouts of America, now the garden of fresh fruits. Check your trusted church and discuss this with your pastor. One such organization is The Royal Rangers. Another is The Trail Blazers. Withdraw any further support for the Boy Scouts of America and notify any organizations or advertisers who sponsor this pedophile grooming group that you no longer support them.

Churches, it is up to you. Pastors, man your pulpits! Preach the Gospel truthfully and without compromise. When we were ordained, we also were charged with being "Defenders of The Faith."

We must take that charge seriously. Whenever someone comes against our churches and Christianity let us use our pulpits to push back, putting a spotlight on the actions against the church and take charge of the problem. We can find plenty of Scriptures to back up our defenses.

People, please attend and support your churches and help strengthen them. Stand as a mighty force for God. And let us all be solid Christians who walk the walk with firmness against these satanic attacks on our children and upon us. Again Pastors--MAN YOUR PULPITS! This must be stopped.