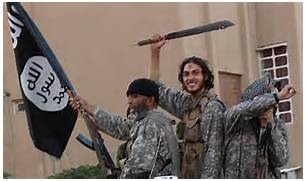 The creases of grief etched in his face could not be concealed. Normally cheerful, he ran a men's clothing shop in a mall in California. Expressing concern while asking about it, "Alfred" said he had just received a phone call informing him that his best friend in Egypt had been murdered, thrown to his death from the window of his apartment to the concrete below. All in the name of Jizah, or, Dhimmititude.

These are the' taxes' forced against non-Muslims in exchange for tolerating their presence and as a coercive means of converting conquered remnants to Islam. It is the Islamic version of the Mafia's 'protection' racket, where you pay to 'protect' your place of business from destruction and vandalism from roaming thugs.

The friend's Jizah, or protection taxes, became higher every month until the Muslims were demanding everything he earned in his business. They were prepared to strong-arm him into compliance. He finally called the police who came to the apartment, sided with the Muslim mob and helped throw him out the window.

This is what it is like for non-Muslims living under imposed Sharia Law, which they are determined to implement in any county they enter. This is the goal. And enter they do with the Soros sponsored Democrats making certain all doors are open to them.

Presenting themselves as "refugees" They manage to cross borders" that are no longer borders due to lax immigration laws. Once in, they immediately set up shop and prepare to commit Jihad, killing citizens from within to frighten and drive them into compliance with THEIR rules. There is not even a question of them assimilating into the culture of the country they crash. The goal is to transform any country they enter, into Islamic rule, dragging it from modern society back to the Stone Age.

It is all about conquest, never assimilation. They enter a country to take it over. And the George Soros Democrats have viciously attacked President Donald Trump's ban on further entry of Muslims into the U.S. until they are fully vetted, which is reasonable. This is not only common sense, but essential for the safety of our country.

Soros wants all borders open so they can come and go as they please. It is a ploy to weaken our country, the only country standing in the way of The One World Order.

When President Trump proposed the banning of Muslim entry into America, the Democrats yelled that this was "Discrimination." Well duh! You bet it is and for good reason. Think San Bernardino, Orlando, 9/11, Ft. Hood, and dozens of other attacks from within that show it is good sense to discriminate. As the late Ronald Reagan famously said, "Trust but verify."

When a specific identifiable group has a tenancy to do certain things, then it is good sense to look at that group with suspicion. Yes there are very good people in any group, but the number who are not is the concern as the group itself seems to be so inclined.

Stereotyping? Perhaps. Philosopher David Hume details principles which determines the formations of conclusions: He writes: "Our conclusions from experience carry us beyond our memory and senses and assure us of matters of fact, which happened in the most distant places and most remote ages; yet some fact must always be present for the senses or memory, from which we may first proceed in drawing these conclusions.

"We can assign all our conclusions from experience. The principle is, CUSTOM or HABIT. For wherever the repetition of any particular act or operation produces a propensity to renew the same act or operation without being impelled by any reasoning or process of the understanding; we always say, that this propensity is the effect of Custom." David Hume: An Enquiry Concerning Human Understanding.

Governor Moonbeam of California, this past week, ruled that his entire State of California is now declared to be a Sanctuary State. How's that again? This means any illegals from anywhere are free to come into this state, enjoy its benefits paid for by taxes, and not risk arrest for being here illegally. Many get away with crimes without punishment. California has always been flaky but this is way over the top.

Then this week your columnist received a press release from Senator Dianne Feinstein proclaiming that she is introducing a bill to "rescind Discriminatory Order on Immigration, Refugees." Here is her statement to the Press:

"President Trump's discriminatory executive order isn't about strengthening our national security. It 's a transparent effort to fulfill his campaign promise to implement a 'Muslim Ban.'

"These divisive policies alienate our allies in the Muslim world and fuel anti-American sentiment by sending a message that the United States is out to punish one religion.

"To say that someone who comes from a particular country or is a member of a particular faith is barred from this country is contrary to our founding principles and will do nothing to make us safer."

Of course, all the dem senators are backing and supporting her bill while George Soros grins.

Has California lost its mind? Something can never be lost that was never possessed.