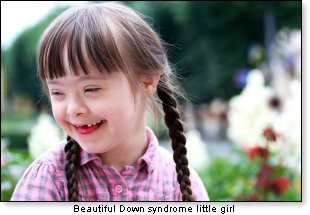 Before getting into the details of this shocking piece, let me begin with a personal proclamation: I actually pity those who have never known a person with Down Syndrome – whatever their age. Those who have not, have missed out on a wonderful experience indeed. And that is accompanied with lots of love.

These are the most loving people anyone could find on earth. Indeed, they see only the best

in everyone they meet. Their minds are so pure that I doubt that they are capable of even thinking about evil.

At first glance, they look a bit different than others, then the beauty begins to emerge. That beauty can only be discovered by those who have a pure heart. But there are people who are driven only by the cosmetic good looks of anyone they meet which is the magnet that draws them. The heart doesn't matter, just knockout good looks. How shallow.

Yet because those with Down Syndrome do look different and have the mind of a an eight or 9 year old, many are rejected, with the hardhearted avoiding them altogether. But even with a limited mental ability, they are very dependable. Many work at jobs in grocery stores, restaurants and even helping as clean up crews in college cafeterias.

I saw a group of them sitting in a restaurant, having seen them earlier cleaning the cafeteria after lunch at Los Medanos College in Pittsburg, California. Stopping at their table I complimented them on the fine job they did earlier at the cafeteria. They all broke out in the sweetest smiles one could ever see.

They were delighted for being recognized for a job well done. They are all so very appreciative. And they are happy with their lives.