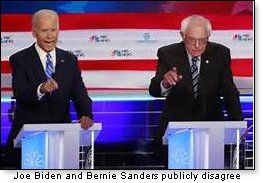 MIAMI 6/27/19 – First of all, the headline is descriptive of the story, not an opinion or editorial. Read it again. Thursday night, the final 10 Democrats running for president had their say. These were the most unprofessional, undisciplined, impolite group of so-called leaders ever to be seen or heard. Each candidate was given a specific time limit (45 seconds) for their responses to questions, with 30 extra seconds for rebuttal. These time limits were due to the fact 10 candidates were to be presented.

Once a candidate was asked a question, they locked themselves to the mic and when the moderators would say, "Thank You," a direct cue to stop talking, each one continued bloviating with full steam as the moderator repeated "thank you" three or four more times, then saying, "TIME," before they shut up. Sometimes they still kept talking even when the moderator took over the mic. That is totally unprofessional. If that were not enough, another candidate on stage would up the volume of his or her voice to challenge what was being said. Then several others chimed in, along with both moderators, with everyone talking at once.

The audience was just as bullheaded and rude as the candidates. The audience was asked at the beginning to not react (applaud) during the discussion since there were so many candidates that it would take away from the time they had. The audience too was totally uncooperative and applauded loudly and continuously as each candidate made a point they liked.

So why was there absolutely no decorum during the entire debate? Because everyone there, on stage and in the audience, was Democrats. So that should be self-explanatory. It was maddening, as all of the candidates, along with the moderators, were talking-yelling at the same time, interrupting each other, determined to make their point. It frankly was a free-for-all. Again, no decorum or class whatsoever.

They made it clear that reparations should be paid to blacks for having been slaves, with which no one present was involved, since that all happened a couple hundred years ago. And that reparations discussion was made by Marianne Williamson, who wrote the TV program "Touched by an Angel" and who does not hold, and has not held, a government office. Yet she thinks she should become president. This was a personal disappointment for this writer.

Bernie Sanders, who is an acknowledged socialist, stated that he would raise taxes so that everyone else would be supported. His plan: non-working families should receive $1000 a month. A question was raised if undocumented immigrants should be deported: "...those who say no please raise your hands"...everyone raised their hands except one or two. So any immigrant who crashes our border and sneaks into this country should be able to stay, be supported. and have food on the table.

Kamala Harris got into a noisy fuss with Joe Biden, then Bernie Sanders interrupted Harris, which turned into angry verbal gymnastics. At that Harris said she did not expect to be caught in a "food fight,'' after just talking about food. At least there was one light moment.

These candidates were not proper people in speech or conduct. This is a reference hated by this writer...but was used three times from the stage by the Democrat candidates...that reference is: "being pissed off!" To speak that way is about as low as one can get.

Here is what the Democrats are focused on: Raising taxes, free Medicare (actually Obamacare), no borders, taking away all guns from citizens, keeping Roe v. Wade, and climate change, which we know is a tool to implement a world tax. These were the discussions of the night.

This so-called presidential debate was a tool for spitting verbal bullets at President Donald Trump. Indeed, one of the candidates asked what the greatest threat to the United States was and another candidate quickly answered, Donald Trump, as the audience roared in approval. Bernie Sanders called President Trump a racist, a liar, and responsible for immigrant children living in deplorable conditions and suffering as a result.

Interesting, the Democrats are spreading that yarn as far as they can. HOWEVER , no one is permitted to go inside those buildings, where the children are, to see for themselves what the conditions are. So the Demoncrats can say anything they wish about the conditions in those buildings, even though NOBODY IS ALLOWED TO GO IN TO SEE FOR THEMSELVES.

And this, dear readers, introduces you to the Democrat presidential hopefuls. These are wretched people who push anything that is immoral and outrageous such as teaching LGBTQ sexual lessons in the public schools – THIS IS NO EXAGGERATION.

Not one of the daffy Democrats in those debates could accomplish one thing that President Donald Trump has done for our country since taking office. The only thing they will bring is socialism and diversity. And God knows we have more diversity than we need in The United States of America. President Donald J. Trump accomplished more for America during his first 2 years in office than any president in history. And remember, it was 68 million people who put him into the Oval Office. And we must do it again.