July 3, 2019
Houston Pastor Joel Osteen and his lovely wife Victoria publicly showed their support of the LGBTQD – Lesbian, Gay, Bi-sexual, Transgender, Queers and Debauchery practitioners – by attending a Lady Gaga event at Harlem's' Apollo Theater which celebrated Gay Pride Month. It is not clear if the Osteens were there with Lady Gaga, who would have invited them, or, if they simply got on a plane, paid for the tickets and flew there. The entire event was centered around "Gay Pride."

My question is: What in blazes is a church pastor doing in the midst of a filthy display of deviant sex while thumbing noses at God by participating in a practice that is condemned in the Bible multiple times? No excuse can satisfy this question. The Osteens' very presence in that sexual filth works to confirm that such sexual perversions are perfectly OK....acceptable. Does that include "Scatting" where a couple rubs their feces on each other's bodies and then licks it off? Yes, that is a common LGBTQD practice (ritual). And this is one of the things that are taught in California Public Schools.

Several celebrities were there to support the abomination that filled the stage along with vulgarity including the "F" word being tossed about. Indeed, that is how the program began with Lady Gaga yelling to the packed house: "Are you ready to "F-ing party tonight?" "YEAH," the crowd roared as Osteen smiled Texas style.

This particular celebration recognized the 50th anniversary of the Stonewall Riots, when the gay bar was raided by New York cops and customers arrested for lewd conduct, which was headlined in newspapers all over the country. This raid set the pace for the "gay rights" movement which has been a part of the lives of everyone since. 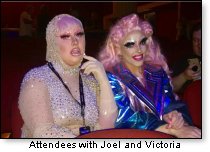 Is this New York event any place where a minister and his wife should be? No, it is not! This writer has pleaded with ministers and pastors to "man your pulpits," and to set the example of morality, integrity, and honesty. Paul's instruction for pastors in 1 Thessalonians 22 clearly states: "Abstain from all appearance of evil." The Osteens instead wallowed in evil by attending that sick event. If our morals, integrity, and honesty are no better than anyone sitting in the congregation, then we have failed as pastors and should flee the ministry, and take up another profession. One should never dabble with Holy things.

Even though I saw Joel Osteen more as a motivational speaker rather than a biblical preacher, I felt protective of him since he had become such a hit and created such a huge following that I knew from experience that his success would stimulate dangerous jealousy among other ministers. Sure enough, one minister, Dr. Michael Brown, wrote a public letter to Joel challenging him on his preaching. I in turn attacked Rev. Brown, accusing him of jealousy and envy.

And because of my own experience, I let that guide me when I wrote a scathing letter to Pastor Brown, which was published in several news outlets. That was a mistake I truly regret. And when I learned from Pulpit and Pen and also in American Prophet, about the real Joel Osteen, who flew to New York to aid and assist the LGBTQD movement, I was shocked. But then internal turmoil flooded through my very soul. I had misjudged a fine minister.

I publicly apologize to Pastor Michael Brown for jumping in with such a response. Yes, I was still carrying the pain of the betrayals which influenced my response, which should have been tossed long ago. I am so very sorry. Pastor Brown, please forgive me. I make that plea with all sincerity.