Hassan Nurullah
The source of Republicanism

June 4, 2011
In my last article "The Soul of Republicanism" two items sparked controversy in the discussions the article spawned. One being some taking umbrage at my giving praise to David Barton at the end of my article.

Apparently, there is criticism aimed at Barton's work, accusations of misrepresentation and lying. The criticism comes most often from those who hate the very idea of our nation having Christian origins. 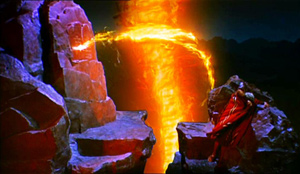 I was unaware of these criticisms and I will investigate them for myself! I have read enough directly from the Founders themselves — apart from Barton's work — to stand behind the Christian premise.

The other item was a statement I made within the text of the article:

"However, it does not follow that because we have religious freedom in America, all faiths are equally valid, or are equally useful in determining American morality or political thought."

I was asked in a thread to clarify this statement. Before I had the chance to respond, a reader did an excellent job of explaining it for me. Mark Pepin wrote:

"I'll take a stab at it and see if Hassan and I agree. It will also be added clarification for RHS: My understanding of that statement is that the founding of this nation, being dominated by Christian thought, was intended to support the morality of the Christian religion. Not all religions have morality systems that are equal to Christianity, and therefore, not all should be favored. The fact is, many of our laws come straight from the Bible, while others are derived from Biblical thought."

I do indeed agree — Mark gave a very good explanation of my statement. I'm afraid I originally failed if my statement was not universally understood in the context Mark affirms, I thought it was clear cut. I will however go further than Mark's clarification since the question affords me the opportunity to so.

Truth is, there is an exclusion of any other faith besides Christianity in the founding principles used in determining our system of government. (Note that I am saying "faith," there were civil considerations. After all, the Founders did not invent republicanism).

If you assign equal validity to the world's various faith traditions, you effectively invalidate them all. We can all be wrong, but as they all contradict each other, logically, we cannot all be right.

I have said this before in various discussions over the years, primarily with atheists. It is impossible for man to have created God. Man does not currently, nor has he ever had, the power to create ex nihilo "out of nothing." Everything man has produced has a frame of reference. There could be no god concept apart from God having first revealed Himself to man.

If God revealed Himself to man it is prima facie that He did so in a particular way. It is the responsibility of man to determine the way. Creation itself is the only safe objective medium to use in determining which tradition is reliably the way God revealed Himself.

In other words, the tradition whose source makes the most accurate statements about the universe and reality is most likely the Creator of the universe. The source most adept at describing man's nature objectively as opposed to the way man wishes to see himself, is the Creator of man.

The God of the Holy Bible expresses this in what amounts to a challenge to man and all who would espouse false beliefs. It is a recurring theme in the Holy Bible:

"The heavens declare the glory of God; and the firmament sheweth his handywork." Psalm 19:1

The Psalm goes on to describe the movement of the sun, declaring that only God could put such a thing in action.

"Because that which may be known of God is manifest in them; for God hath shewed it unto them. For the invisible things of him from the creation of the world are clearly seen, being understood by the things that are made, even his eternal power and Godhead; so that they are without excuse: " Romans 1:19,20

The God of the Holy Bible is saying examine the world and compare it to what I have revealed to you. Many of history's greatest scientists understood this and expressed as much.

In a beautiful letter to his wife Maria Christina, Nobel Laureate in Physics, Guglielmo Marconi wrote:

"I know how much you love and cherish the beautiful Nature — the expression of God's Will — where one can find the ideal eternal values: the Truth, the Beauty and the Good (and you possess the three of them). The harmonious unity of causes and laws forms the Truth; the harmonious unity of lines, colors, sounds, and ideas forms the Beauty; while the harmony of emotions and the will forms the Good, which in being the ultimate expression of the Eternal and Supreme Creator brings man to completion and drives us to seek absolute perfection."

"The more I work with the powers of Nature, the more I feel God's benevolence to man; the closer I am to the great truth that everything is dependent on the Eternal Creator and Sustainer [Creatore e Reggitore Eterno]; the more I feel that the so-called 'science' I am occupied with is nothing but an expression of the Supreme Will, which aims at bringing people closer to each other in order to help them better understand and improve themselves."

Physics Nobel Laureate Arno Penzias, in a statement to the New York Times on March 12, 1978 on the Big Bang Theory remarked:

"The best data we have are exactly what I would have predicted, had I had nothing to go on but the five books of Moses, the Psalms, the Bible as a whole."

Nobel Laureate in Physics, William Phillips in a letter to T. Dimitrov May 19th, 2002; in reply to several questions as to whether he believed in the existence of God:

"I believe in God. In fact, I believe in a personal God who acts in and interacts with the creation. I believe that the observations about the orderliness of the physical universe, and the apparently exceptional fine-tuning of the conditions of the universe for the development of life suggest that an intelligent Creator is responsible. ...I believe in God because of a personal faith, a faith that is consistent with what I know about science."

There can only be one truth and therefore only one good source to base our society on. The Founders understood that premise back in the 18th century. If one takes a practical look by eliminating the idealistic, when engaged in comparative theological study, you have to determine that there are many false religions in the world, but only one that lines up with reality.

Not all faiths can be equally valid because all faiths do not equally reflect reality. Why would God tell the Hebrews the earth is round and that it hangs in space, but then tell the Hindus the earth is flat and it sits on the backs of elephants standing on turtles? Why give one group the more accurate, demonstrable truth and lie to another group?

Why tell the Muslim the sun sets in a pool of mud and slime? If the Qur'an gets that wrong, if it is wrong on natural things, why should I believe what the Islamic god says about the supernatural. If Allah gives false reports about creation, and the tangible, how can I believe him when it comes to my soul and the intangible?

The wanton barbarity of those who follow the Qur'an strictly and the tragic state of affairs in Islamic nations, who base their laws on the Qur'an's brand of morality, stand as a testament to this truth, particularly as it pertains to human rights.

Plainly, if you do not think it would be pleasant to live under Sharia, which is based on the faith of Islam, then Islam is not morally equal to the faith that served as the source of American republicanism.

If you chafe at the very idea of living under a caste system like the one India employs, inspired by the Vedas. A system where people starve under the feet of a fat, well fed, and I might add tasty and nutritious, "sacred cow" working out karmic destiny, then Hinduism is simply not an equally valid source to structure a society around.

Nor is a lack of religious conviction a good starting point for government. One merely has to look at societies founded upon humanism and secularism to see that an atheistic perspective can be down right deadly on a massive scale.

The horrors of the French revolution; the tens of millions slaughtered by atheistic socialism in Soviet Russia; Communist China; and sundry other socialist Asian states. Let's not forget, Fidel Castro and Che Guevara's nightmarish excesses. Even Hitler's Nazism like the others, was based on naturalism at it's core and the list goes on and on.

If there is a God, as it seems logical to assume, then as He says-there is also an adversary working against man. The Adversary, like manm lacks the ability to create from nothing, but he is very good at inspiring man to do what is counter to man's own well being.

It is the Adversary that inspires atheism and false religions and, therefore, the faulty human states including the ones our Founders fled.

I could site example after example! All those lands and others are hemorrhaging people and those people are coming where? Here! Whether you accept Christianity or not; whether you find David Barton an honest broker or not. The premise of "The Soul of Republicanism" is sound and worth remembering!