August 5, 2011
"States' Rights!" How many concepts established in our Constitution have been more controversial and situationally pliable, perhaps even ephemeral than "States Rights?" It is at once (depending on one's perspective) both noble concept and apex of licentiousness.

In a "more perfect union," "States' Rights" is perhaps second only to the recognition of an individual's "unalienable rights," endowed by the Creator, which is greatest of the great ideas inherent in our national identity. Yet due to the "inherent" fallen nature of man, this virtuous idea has been used on occasion as a tool of oppression. 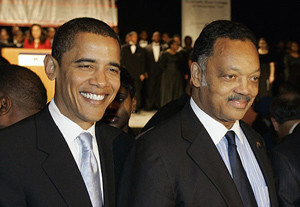 This reality begs other questions: Is it the concept of states' rights that is flawed, or the men who twist it to grant themselves powers over other men? Should we do away with the concept all together and cede all power to the federal government, or should we endeavor to curb our baser instincts and rise to the nobility of the concept?

In answer to the last question, the modern left would surely prefer the former. Particularly that segment on the left that derives its power from race baiting. Indeed "race" has been at the vanguard of the states' rights question from the very beginning of our American experience.

Historically, it has been the Democrat party that has made best use of the perceived mercurial nature of the states' rights idea. Democrats are for states' rights when it suits them and against the idea when it encumbers their agenda.

The Democrats were for states' rights and in full support of the Tenth Amendment when it allowed them to maintain their use of chattel slavery in the American South. But Democrats were all too eager to infringe upon the sovereignty of Northern states when it came to decisions like the Dred Scott ruling and the Fugitive Slave Act.

It was Infringements like Dred Scott and the Fugitive Slave Act that incensed the Northern states and abolitionists in particular as exemplified by Harriet Beecher Stowe penning the pivotal novel "Uncle Tom's Cabin" and the subsequent founding of the modern Republican Party.

At the time of the American Civil War, you were a rare creature indeed if you were a member of the Republican Party and you were not also a staunch abolitionist, as this was the stated purpose of the party's founding in 1854. The far left in America has done a very good job of expunging this fact from the American consciousness!

Liberal Democrats have been very successful at recasting the history of the Democrat Party. One of the best tactics of oppression is to convince the oppressed that the oppressor is in fact their benefactor while demonizing and recasting the true liberator.

"And no marvel; for Satan himself is transformed into an angel of light." II Corinthians 11:14

We see this very clearly in modern discourse as it pertains to slavery. The modern left works tirelessly to downplay the Republican Party's roll in the abolition of slavery. Even recasting Abraham Lincoln as someone impartial to slavery, a goal most often accomplished by the use of a sentence fragment taken out of context from a letter written by President Lincoln in response to an editorial by Horace Greeley: "If I could save the Union without freeing any slave I would do it..." It is completely ignored that Mr. Lincoln in the same sentence continued:

"...and if I could save it by freeing all the slaves I would do it; and if I could save it by freeing some and leaving others alone I would also do that. What I do about slavery, and the colored race, I do because I believe it helps to save the Union; and what I forbear, I forbear because I do not believe it would help to save the Union." Lincoln summed up the letter: "I have here stated my purpose according to my view of official duty; and I intend no modification of my oft-expressed personal wish that all men everywhere could be free."

This does not suggest a person who is indifferent to slavery, but rather someone who holds out hope for the noble purpose of the Tenth Amendment and the Constitution as a whole — a person desirous to see men live up to that noble idea and cease oppressing their brothers because it is the right thing to do.

Lincoln makes clear this point in a letter written to Albert Hodges, the editor of the Frankfort Commonwealth, a Kentucky Newspaper" : "I am naturally anti-slavery. If slavery is not wrong, nothing is wrong. I can not remember when I did not so think, and feel. And yet I have never understood that the Presidency conferred upon me an unrestricted right to act officially upon this judgment and feeling."

Though Mr. Lincoln ultimately acted to end slavery by force, he never liked having to do so. President Lincoln was a staunch believer in states' rights. He was loath to inflict the weight of the Federal government on the South. Yet he did so for a greater moral good. Lincoln sums up the Hodges letter: "In telling this tale I attempt no compliment to my own sagacity. I claim not to have controlled events, but confess plainly that events have controlled me. Now, at the end of three years struggle the nation's condition is not what either party, or any man devised, or expected. God alone can claim it. Whither it is tending seems plain. If God now wills the removal of a great wrong, and wills also that we of the North as well as you of the South, shall pay fairly for our complicity in that wrong, impartial history will find therein new cause to attest and revere the justice and goodness of God."

The Democrat party contemporaneously has all but abandoned the idea of "States' Rights" after using it so effectively, in recent history, to strengthen the party's despotic Jim Crow Laws.

Now that states' rights no longer serve the Democrat Party's ends, they have given themselves over to the idea that the Federal government should in all instances supersede States' Rights if the citizens of those states have the temerity to oppose the left's idea of "social justice;" if your citizenry stands for the defense of traditional marriage; enforcing the immigration laws already on the books; or are in favor of limiting the power of Federal government.

Jesse Jackson illustrates this truth clearly in a recent speech in support of big activist government.

The Democrat party, in an effort to reshape history to reflect favorably on them, has used the Nixon era's so-called "Southern Strategy" to mask their party's less than stellar history on civil rights. The liberal narrative is that the racist Democrats of the Civil Rights era now infect the Republican Party.

Democrats say racist Southern politicians, infuriated by Northern Democrat support of Civil Rights legislation, jumped to the other party. This is in spite of the fact that the modern Civil Rights struggle began with Republican President Eisenhower desegregating southern schools.

Is America supposed to accept that even though the Republican Party was overwhelmingly in support of Civil Rights, racists felt comfortable, even compelled to join the Republican Party? Richard Nixon himself, the beneficiary of the so-called Southern Strategy, opposed bussing, but gave teeth to the feckless and unenforced Civil Rights Act that passed during the Lyndon Johnson Presidency.

To preserve citizen's health and safety, Mr. Nixon oversaw the creation of the Environmental Protection Agency (EPA) and the Occupational Safety and Health Administration (OSHA) in 1970, and the Consumer Product Safety Commission (CPSC) in 1972. Proving that all throughout our history, Democrats spout rhetoric while Republicans actually implement real "Change."

On the campaign trail Democrat President Woodrow Wilson courted the Black vote by promising: "Should I become President of the United States they may count upon me for absolute fair dealing for everything by which I could assist in advancing their interests of the race." Upon election, Mr. Wilson set back Civil Rights by decades as he fired key black supervisors working in the government, replaced them with whites and completely segregated federal workers. He followed that action by giving the ambassadorships traditionally held by Black Americans to countries like Haiti and Santa Domingo to whites.

That these two changed parties for political expedience is absolutely true, though these two, above all the other racist segregationists like Vice President Al Gore's Father Al, Sr., who remained Democrats until their deaths, had mitigating circumstances in their lives that may have caused them to soften on race over time.

Godwin had sought out and enjoyed the Black vote during his career and actually enjoyed the NAACP's endorsement during his 1965 bid for the Virginia Governor's office. Godwin also supported Lyndon Johnson's candidacy for President thereby losing his Democrat base which despised Johnson's Civil Rights Act. The Civil Rights Act enjoyed support from the vast majority of Republicans yet we are to believe that racist joined the party most responsible for the Act. Back in 1925 Strom Thurmond had a daughter with one of his black servants. Thurmond paid for his daughter's college education and supported her financially. In a display of liberal tactics, it is interesting to note that in Thurmond's Wikipedia entry, he is not referred to as a "Conservative" until after it is recorded that he had become a Republican. The entry avoids calling him a conservative, while it talks about his years as a Democrat, even though this was the time he was most ardently racist.

This is a very subtle piece of propaganda which fits the leftist polemic against the Tea Party and Conservatism in general. Simply stated "To be a Conservative, is to be a racist." That is a lie the weak-minded and unaware accept as gospel truth and is also why the left fights passionately to cultivate and maintain weak-minds.

The left has proven powerfully adept at selling the rhetorical over the substantial, so adept that the average liberal is completely uninterested in truth. None are more unaware of the realities of true racial history in America beyond the legacy of slavery than American Black folks. Even though we, more than any others, have felt its sting and should remember. Through entitlements and welfare, the Democrats have succeeded in clouding Black folks minds, to the point that we are oblivious to the true "Southern Strategy."

The one where the Democrats, upon recognizing they could not win the Civil Rights battle with clubs, fire hoses and attack dogs, changed tactics and began rotting the country, primarily the minority communities, from within. We Black folks are now slaves to entitlements, the leftist idea of big government now our masters.

"When it comes to this I should prefer emigrating to some country where they make no pretence of loving liberty — to Russia, for instance, where despotism can be taken pure, and without the base alloy of hypocracy." (sic) — Abraham Lincoln in a letter to Joshua Speed