Hassan Nurullah
The problem we all live with

August 30, 2011
Because of the damage wrought in the Black community by these people's ideas, mentality and actions, I made a short list of men for whom it would take every ounce of Christian restraint to keep me from punching in the throat on sight if we ever met. 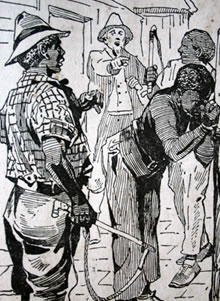 As these men prove, education and success are no measure or guarantee of wisdom. They are indeed the modern day Sambos and Quimbos, tirelessly wielding the whip for their racist liberal masters, keeping the coloreds inline on the Democrat plantation. Servile and ignorant, they look towards their masters in government to see to their needs.

They are happy to be in those nice servants quarters the masters done let them have in Compton, East St. Louis and the like. The Democrats of old forbade the education of their slaves, lest they become uppity and begin to question their station. The modern Democrats still don't want Black folks learning to read, so they resist any idea that might have the effect of improving education for urban youth.

School vouchers? "We don't want them going to school with our children!" Charters? "What about the teacher's unions?" The Democrats have even managed to have the more slack-jawed Black folks championing the failed urban school systems, telling their fellows "the Charter Schools really aren't that great."

The NAACP teamed up with the United Federation of Teachers in a lawsuit against the City of New York, alleging the charter schools took resources away from the public schools. As well they should — when you consider the charters put those resources to much better use.

President Obama, as his support begins to erode even in the Black community, in a gesture I am sure was aimed at assuring his more reactionary urban constituents that he is still "down," hung Norman Rockwell's painting "The Problem We All Live With" a few feet from the Oval Office.

This painting, one of Rockwell's most famous, was inspired by the plight of Ruby Bridges. In 1960, at age 6, Ruby Bridges became the first student to be integrated into schools in New Orleans. The painting depicts a little Black girl dressed in white, escorted by a cadre of U.S. Marshals, errant tomatoes splattered behind her on a wall adorned with the word "NIGGER."

I am sure it's not lost on the President, but his adherents fail to see the irony in his hanging this particular painting. The left eschews a Rockwellian depiction of America in almost every way. Always quick to portray Rockwell's conservative chronicling of American society in the last century as hopelessly idealized, they claim it has very little relation to reality.

Yet it was the conservatives who loved that romantic view of America as rendered by Rockwell that actually championed desegregation. It is forgotten that it was a Republican Dwight Eisenhower who ordered those U.S. Marshals down to Nola to escort Ruby Bridges to school! The leftist Democrats also want it forgotten that it was Ike who got the Civil Rights ball rolling to begin with.

The painting is a dramatization of what was happening in the South at the dawn of the Civil Rights Movement. Adding to the irony, anyone in New Orleans who was opposed to Ruby Bridges or the "Little Rock Nine" attending school with all them good White children back then and likely to throw tomatoes and write "nigger" on the wall, would have been a staunch Democrat.

Democrats still champion separate but equal education for Black folks. How else do you explain their dogged encouragement of failed educational paradigms? The fewer Black folks in good school systems the more Black folks languishing in the ghettos for the Democrats to exploit. Keep them on the plantation; let master think for them.

"Pay no mind to them uppity conservative Black people, they forgot where they belong. We know how to control our coloreds. You got to make sure they understand they can never compete with the White man, unless we help them. And we only help the ones that know their place. You know the American dream ain't for you, boy! You know the White man ain't never gonna treat you like an equal."

That is the question ruling the lives of far too many of the American Black youth of today. They feel like there is no hope. They had hope in Barrack Obama, he seems to be repaying that hope with indifference. Maxine Waters was absolutely correct to call Mr. Obama on his failure to even pretend to address Black issues. A stopped watch and all that...

It should be acknowledged that the hardest hit segment of the President's constituency is the Black community, yet on his recent bus tour he did not stop in a single urban area to assure that community he is working on it.

The bottom line is that Mr. Obama knows despite the utter failure of leftist policies in urban America, Black folks are going to vote for him in huge numbers just because he is Black and more importantly, a Democrat. Because Black folks would still vote for a White Democrat, if the Republican candidate is Black, we saw that played out in the 2008 elections.

So why waste a trip to inner city Chicago? It is the White vote Obama needs and he knows it. So it is much more pragmatic to have a donut in Decorah, Iowa, than a Coney Dog in Detroit, Michigan.

The "problem we all live with" today, is an unengaged Black youth. Where the Black children like Ruby Bridges of the first half of the 20th century saw education as a means to better themselves, far too many of today's Black youth have zero confidence in the school systems they are trapped in by liberal policy's ability to make them viable. Along with a belief that the whole world is stacked against them, because that is what their heroes keep telling them.

And the left, despite the platitudes they spout to the media, do all they can to foster that attitude amongst urban youth. "Progressive" morality has decimated the Black community. Driven by urban entertainers (themselves motivated only by money and fame), our Black youth idolize and internalize some of the most unwholesome behavior and ideas that have ever existed in America.

With our Black children raising hell in public and flash mobs robbing people based on race, Blacks are participating in the most self destructive conduct imaginable. And the left fans these flames every time they portray Black youth as victims instead of responsible beings who control their own destinies.

The only people preying on Black folks today on a regular basis are other Black folks! The naked stupidity of Black youths attacking White people is proof positive of their complete detachment from all practical reasoning. Not only is it morally wrong to attack anyone of any race, it is beastly foolish to pick a fight with someone who has numerical superiority and a great deal more resources than you.

The leftist will say the establishment and corporate America is preying on Black youth, sucking the jobs out of the city and taking them overseas. They can say this with a straight face as they grant men like G.E. CEO Jeffrrey Immelt all access passes in fraudulent quasi-governmental positions like "The President's Council On Jobs And Competitiveness." Meanwhile, General Electric continues to be one of our greatest exporters of American jobs.

When do we wake up? Perpetual idiot Janeane Garofalo accused Presidential candidate Herman Cain of suffering from Stockholm Syndrome and being a paid shill for the Tea Party, acting as a beard covering inherent racism in the conservative movement. Yet men like Herman Cain represent and offer an alternative to failure, a break from the misery plantation as cultivated by the left that the Black community now finds itself yoked to.

How long must the Black community wax worse and worse before we stop listening to the modern day Sambos and Quimbos? Some are complicit in advancing the racist liberal urban agenda — men like Sharpton, Hill and Dyson, who know for whom they are working and what impact it has on urban America, but, it got them into the big house. Others are just plain dumb, like Harvey, Joyner and Kanye West; all they know is what they have been conditioned to know, but their bully pulpits make them terribly harmful as they spread that conditioning.

Black youth create havoc, often racist in nature, film it and post it on YouTube themselves in an unenlightened celebration of folly and madness. Then racist White folks see it on YouTube, call the videos of Black bad behavior "Chimp outs" and use it as a justification for their own hatred as they spew racial invective! All this under the presidency that was supposed to heal the nation?

The left cringes at the idea of ones faith playing a factor in governing. Most who hold to a liberal perspective have little regard for the things of the Holy Bible and the Bible's God. They maintain the belief that man can restrain man, but never wonder why their endeavors bear so little fruit. You can change laws to protect man from his fellow, but you cannot legislate the attitudes of his heart.

Frankly, the left is only interested in persuading people to vote for them in elections; they don't really care what happens to folks in their work-a-day lives. This is the primary reason they oppose a practical Christian faith. They are OK with faith on Sunday, but don't bring it into your political and practical life.

They know that the only way to enact real "Change" is through Christian faith, but that goes against everything they work toward. They condition their henchmen like Sharpton and Cornell West to advocate for folks placing their faith in government, rather than God and themselves through Biblical truth. Why? Because the truth has the nasty habit of making men free!

"A new heart also will I give you, and a new spirit will I put within you: and I will take away the stony heart out of your flesh, and I will give you an heart of flesh. And I will put my spirit within you, and cause you to walk in my statutes, and ye shall keep my judgments, and do them. And ye shall dwell in the land that I gave to your fathers; and ye shall be my people, and I will be your God." Ezekiel 36:26-28