Hassan Nurullah
It's not easy being green

September 7, 2011
Two and a half years ago, I wrote an article laden with examples of the American liberals' disdain for free debate and resistance against allowing competitive viewpoints being weighed in the marketplace of ideas. We saw the tally of new jobs in the month of August hit a number that had not been reached since September of 2010: zero! 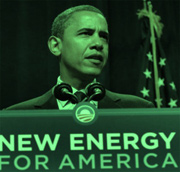 Two of the last twelve months have registered zero net job growth. Let me repeat that, zero net jobs! The overwhelming majority of the rest of the year's jobs numbers have been...underwhelming. At what point will it begin to dawn on the Democrats that their ideas are fundamentally flawed?

A major plank bolstering the President's platform, as it pertains to job creation, has been the fanciful idea of a green economy flush with new jobs. Mr. Obama was so committed to this whimsical notion, he added a new layer to an already top heavy bureaucracy, something called a "Green Jobs Czar." He then appointed an avowed socialist to inhabit this position, with the inane desire that said socialist should create a new green capitalism driven job engine.

A sizable chunk of the taxpayer's ill-conceived stimulus money (billions in fact) was then ear-marked as seed cash to kick start this new green economic juggernaut. No one on the left seemed to think this odd. In fact, leftist controlled media did all it could to drown out the impassioned warnings against this verdant folly as sober-minded economists critical of the stratagem clucked there tongues in bemused disbelief.

It has been my experience in studying such things that when an idea is truly good, there is no dearth of people eager to put their own money where their mouth is, dreams of windfalls dancing through their heads. Good job-creating business ideas don't need federal backing, they need good lawyers and security professionals to keep competitors from stealing them.

The President and his cohorts squandered the people's money with his green initiatives, giving money to companies the administration bragged about that the business stars of ABC's reality investment show, Shark Tank, would have laughed out of the studio. So, now we see these same green companies dropping like flies. Laying people off, in some cases, actually exporting jobs to other countries, but mostly going out of business all together.

In the case of one strong domestic business concern, Gibson Guitars, we have seen the administration literally telling the company's CEO he should outsource jobs. Suggesting if the wood processing work being done in America by American workers was done in the countries of origin where the wood is imported from, his Department of Justice inflicted strife, would cease.

This sort of wrong-headedness is the thing really responsible for our floundering economy. The left is completely indifferent to facts and reason. The entire green idea is fueled by pseudo science and detachment from reality. The left prefers speculative fiction to hard pragmatic scientific data.

It really stems from the liberals' propensity for worshiping the creation rather than the Creator. The media serves as the leftist religion's high priestess, sacrificing the truth for misguided ideology, utilizing electronic priestcraft and rhetorical slight of hand to hide the dismal failures the left continue to pile up. Anything to keep from using the resources God provided for man's use.

The creation the left worships more than any other, is man himself. The liberal truly believes man has a great deal more power than he does. Even though — as I have pointed out in earlier articles — man's cities, towns and roads make up a scant 2–3 percent of the earths surface, the left is convinced that we are mucking with the planet in some irreparable manner.

What monumental insolence shown towards the One the founders saw as the true Author of our republic. Like man's fiat money, the insubstantial medium created by governmental Ponzi schemes that we now find our nation at the mercy of, liberal insolence is backed by nothing. God gave us gold and silver, oil and land, real wealth and we rebuke it for our own idea. Then watch in wonder as we stand at the precipice of losing our status as the worlds reserve currency, which when it happens, will bring a swift end to our hubris.

As it was suggested back in the 19th century in the Cleveland, Ohio, Plain Dealer, I would prefer that miners furnish my money. As our fiat money buys us less and less, gold and silver have both not only retained their value, their buying power has increased.

The United States has been blessed with oil, coal, natural gas and other resources in abundance — the most inexpensive and efficient sources of energy available to us — and yet we choose to follow the erroneous idea that it is harmful to a planet so large we are less than fleas beneath a man's heel in comparison. In haughty self-worship, the left does far more harm to the poor they claim to care for, than good for the planet that truly does not need their help.

"Then the LORD answered Job out of the whirlwind, and said, Who is this that darkeneth counsel by words without knowledge? Gird up now thy loins like a man; for I will demand of thee, and answer thou me. Where wast thou when I laid the foundations of the earth? declare, if thou hast understanding." Job 38:1-4

As I reflect on this day we celebrate the nation's workers, I cannot conceive of a President whose policies have been more deleterious for the American worker than those implemented by President Barack Obama and his party in the last few years. He and the leftists keep leading us towards leaning on our own understanding, in an attempt to recreate what we already have in abundance, instead of trusting in our hearts that the Lord has provided the resources we need.