September 15, 2011
To search the depths of liberal false beliefs, reveals the cause of our dire circumstance. Our course as a nation is not upright, because we did forget the Lord's plumb line.

"But seek ye first the kingdom of God, and his righteousness; and all these things shall be added unto you." Matthew 6:33 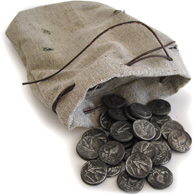 America waxes worse and worse as we stray further from this simple Biblical principle. We have placed the temporal above the spiritual and embraced man's economy, while disregarding God's all together. This is the essential dictum separating the greater part of those subscribing to conservative thought and the liberal mindset. The following of leftist thinking has delivered us to this sorry point in American history.

I have maintained since becoming a born again believer in the Lord Jesus Christ, after having studied the Holy Bible and found it to be evenly derived — the very word of God. It is therefore vexing to me that anyone could confess Christ and vote Democrat. I have personally been unable to determine how I could do so.

Between President Bill Clinton's first and second terms I was saved. I voted for Mr. Clinton the first time, but could not support him the second. Nor has there been a candidate on the Democrat side I could rally behind in good conscience since.

Before the reactionaries begin to accuse me of being naive, let me assure you I do not see it as a cut-and-dry, Democrat bad, Republican good affair.

The Holy Bible assures us that "...all have sinned and come short of the glory of God". God also assures us He "is no respecter of persons." That being said, the Democrats seem to

always follow the way "which seemeth right unto a man, but the end thereof are the ways of death."

You can be sure "the ways of death" are not found when a person is seeking first the kingdom of God. They are entirely two different roads. The Democrats inevitably choose the way that seems right to man.

Such as, it seems right to a man to protect a woman's right to destroy a whole other person's body. It is right especially if she does not want the responsibility of caring for said person once he or she leaves her body.

A child is always the ultimate victim, when a woman makes this particular choice of what to do with her body. An innocent person is not allowed to feel the sun on their face because of the actions of two people selfishly disregarding God's good order from the start.

The marriage covenant first and then the God given gift of sex within marriage. Sex in that context is both pleasurable and life affirming.

In His kingdom, God establishes the sacrament of marriage as a relationship consisting of one man and one woman. The Democrat party finds this establishment unsuitable and works to transform it into a more tolerant sacrament, more inclusive than God's, more reflective of this fallen world.

You may vote Democrat and agree with God's establishments. But when you pull the lever for Barrack Obama, Harry Reid, John Conyers or a Nancy Pelosi, you are pulling the lever for the "way that seemeth right unto man" each and every time, whether you think so or not.

Many of those who vote Democrat and confess Christ (especially in the Black communities) do so with the erroneous idea that the Democrats care more for the disadvantaged, while the Republican Party represents the rich only. Liberals believe this, even in the face of evidence to the contrary.

The left pays lip service to helping the poor and working classes, but their actual policy perpetuates circumstances that make it difficult for the poor to extricate themselves from their condition and makes the business environment unsteady for the working class.

Ergo, cities like Detroit, Cleveland, East St. Louis, and Chicago. Somnolently continue to elect liberal officials, causing them to slide further into lack and despair. It would seem at some point logic would dictate a change in philosophy.

Nevertheless, the most depressed areas press on in a downward spiral of leftist ideology that has failed everywhere it has ever been implemented.

The left reminds me of Judas Iscariot, John 12:

1 Then Jesus six days before the Passover came to Bethany, where Lazarus was which had been dead, whom he raised from the dead. 2 There they made him a supper; and Martha served: but Lazarus was one of them that sat at the table with him. 3 Then took Mary a pound of ointment of spikenard, very costly, and anoint-ed the feet of Jesus, and wiped his feet with her hair: and the house was filled with the odour of the ointment. 4 Then saith one of his disciples, Judas Iscariot, Simon's son, which should betray him, 5 Why was not this ointment sold for three hundred pence, and given to the poor? 6 This he said, not that he cared for the poor; but because he was a thief, and had the bag, and bare what was put therein. 7 Then said Jesus, Let her alone: against the day of my burying hath she kept this. 8 For the poor always ye have with you; but me ye have not always.

This Scripture is another example of God telling us to serve Him while we can, because He first served us. Judas feigns concern for the poor, (not unlike the Democrats), because he was in control of the funds and it furthered Judas. The Democrats enjoy "having the bag" and buying votes with its contents. Carelessly the left trades the financial security of the nation for the control holding the bag affords them.

It doesn't matter that the bag is well and truly empty. The left is content to steal (like Judas) even from future generations of Americans to maintain power today.

There will always be poor folks, and the Bible, in no uncertain terms, extols the virtue of charity. However, God measures charity individually. He did not determine that civil authority should look out for the poor. Stewardship of the resources God gives to an individual includes what portion of those resources we sow unto others.

We are to give, not grudgingly, or of necessity, but cheerfully, for this is pleasing to God. I do not know of a single person who cheerfully gives his or her taxes in modern America on a local or federal level, while receiving less and less service in return. Americans give more-and-more to the government and yet, our situation keeps getting worse-and-worse, not just for the poor, but for everyone.

When Americans were mindful of the precepts of God whenever they made political decisions in times past, we had a history not free of error, but always self correcting. By and by, we saw slavery as the evil God declared it to be and we ended it, Segregation bad — we fixed it. Never has an outside force or power had to intervene. The result? A prosperous America.

It is my hope that a new era of self-correction has begun spearheaded by Anthony Weiner's former constituents. This overwhelmingly Democratic leaning district, just under 40 percent Jewish, rejected the ultra liberal David Weprin in favor of conservative Bob Turner In the House race to fill the seat vacated by the disgraced Anthony Weiner.

David Weprin, himself an orthodox Jew, chose to side with the precepts of man over the tenets of the God of his fathers, which was demonstrated by Mr. Weprin voting in favor of the New York Assemblies decision to legalize gay marriage. The socially conservative Jewish community finally decided to vote their conscience.

It is reported that Democrat Ed Koch supported Bob Turner in a show of solidarity with the staunch support shown Israel by conservative Republicans.

As President Obama and the Democrats weaken America's tacit support of our ally Israel in the Middle East, at last the Jewish community is finally beginning to shake off it's spiritual somnolence.

It was stunning to see the recent interviews conducted by Sean Hannity with NFL great Emmett Smith and broadcaster/activist Tavis Smiley. Both men so close to being smart, but still clueless to the spiritually and pragmatically counterintuitive positions they support. Blind to the damage done by those positions in the communities they seek to influence.

For my Christian friends who vote Democrat, if you want real "change"; "If ye then be risen with Christ, seek those things which are above, where Christ sitteth on the right hand of God. Set your affection on things above, not on things on the earth." Colossians 3:1,2 You'll do much better than placing your "hope" on the wisdom of men who reject those things from above.

President Obama on occasion says he embraces the God of the Holy Bible and His statutes, but the President's actions and the platform of his party betray him. Mr. Obama says he believes marriage is a matter of one man and one woman, but he refuses to enforce the laws protecting that definition.

If only we could get the Black community to cast off the left handed, liberal languor clouding their minds and begin to vote their spiritual convictions instead of reinforcing the failed policies of the left, which are all inspired by the king of this world.

It is my prayer that the Black community learns from the New York Jewish community and begins to consider God first when voting and collectively self correct by veering to the right.

"A wise man's heart is at his right hand; but a fool's heart at his left." Ecclesiastes 10:2