October 7, 2011
In the year of our Lord 1605, a cadre of English Roman Catholics attempted the assassination of the Protestant King James the 1st along with the entire British Parliament. Led by a fellow named Robert Catesby, the plan involved the conspirators procuring the lease to an undercroft (a sort of storage vault) directly below the House of Lords. The plotters stockpiled some 36 casks of gunpowder — enough to (excuse the trope) blow James the 1st and the rest of British government to kingdom come. 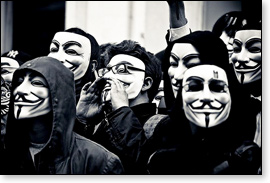 At this time, the Church of Rome had adopted the philosophy; faith is not to be kept with heretics when its violation is necessary for the interests of the Church. As a Protestant nation, England was most certainly in violation of the Roman church's interest, a maxim exemplified by the failed Spanish invasion of Britain attempted in1588.

I am not trying to inflame my Roman Catholic friends and readers with this truncated lesson on the regicidal history of Great Britain. Moreover, I am also not suggesting the contemporary Roman church still adheres to such draconian ideas. What I am conveying, is simply a matter of history.

The Church of Rome at that time was most inhospitable to Protestant kings and the loss of political and fiscal influence monarchs such as these precipitated. I bring this event up because in an odd way it plays a rather incongruous role in today's American political tapestry.

The plan to murder King James was called the "Gunpowder Plot". The king, whose most egregious heresy, according to the Roman Church, was the heretical idea that an individual should be responsible for his own standing with God via understanding intimately God's precepts through a personal study of God's eternal word. Hence, the King authorizing an English translation of the Holy Bible — that could be read by the common man — in his own language, freeing him from the restraint of being at the whim of an elite few who could afford enough education to learn both Latin and Greek.

The vehement Catholic opposition to the new translation of the Bible into colloquial English and the stress of that opposition exerted on, and felt by the group of translators, prompted them to actually mentioned it in their notes recorded in the Authorized Version's first preface:

"So much are they afraid of the light of the scripture, that they will not trust the people with it...Sure we are that not he that hath the good gold, that is afraid to bring it to the touchstone, but he that hath the counterfeit."

All that as a frame of reference to illustrate the empty headedness of the modern-leftist-leaning American youth and how that mental vacuum accentuates the utter meaninglessness of the various so-called "occupy" protests they are taking part in. Our youth know precious little of their own nation's history. Thus, they can hardly be expected to know anything about British history.

Many of the "yahoos" taking part in these protests don the mask of a mustachioed grinning visage, representing one of western history's earliest patsies — Guy Fawkes.

Guy Fawkes was an English born Catholic mercenary who fought with Spain in the Roman church's war against the Dutch Republic. The Dutch rebellion was driven by Rome's oppressive taxes and constant persecution of Protestants.

Fawkes, a member of the Gunpowder Plot conspirators was the fellow responsible for lighting the fuse. The plotters did not know their plan had been discovered. Fawkes was arrested guarding the gunpowder cache and through "enhanced interrogation techniques" gave up his fellow plotters.

Guy Fawkes was the tool of what the leftist youth today would consider the ultimate oppressor. But if there is one thing painfully apparent when it comes to liberals choosing their heroes, history is the only thing more meaningless to them than truth.

Guy Fawkes was adopted as the cool symbol of rebellion not because of what he stood for in reality, but because of a comic book called "V for Vendetta" written by a Brit named Alan Moore and the movie the comic subsequently inspired. For American liberal youth, cool imagery always trumps reality, as well as objective truth.

This is no different really than our youth wearing paraphernalia depicting the murderous Che Guevara while listening to iPods chock full of the rock music Che vowed he would destroy if his rebellion succeeded in the world. Though Che and Fidel executed unknown numbers of gay men in communist Cuba, American youth see no irony in representing Che while participating in a gay rights march.

How many of the protesters disrupting Wall Street do so while tweeting the goings on via an iPhone or iPad made by Apple, which is the very apex of what can be achieved by an industry unfettered by intrusive government policy. Apple is a manifestation of the very practices the Wall Street occupiers say they oppose.

I am a huge Apple fan, have been since the 80's. The recently deceased visionary head of Apple was a capitalist's capitalist. Steve Jobs provided products that have made a tremendously positive impact on the world.

However, there are not many companies responsible for more outsourcing than Apple. Nor is there a more restrictive platform in the free market than Apple's. Yet, you never see anti-corporate youth denouncing Apple or picketing outside of Apple's Cupertino headquarters for the enormous profits they themselves contributed to.

"Woe unto them that call evil good, and good evil; that put darkness for light, and light for darkness; that put bitter for sweet, and sweet for bitter!" Isaiah 5:20

Rep. John Larson, chairman of the House Democratic Caucus declared the youth occupying Wall Street have what he called the "right morals," and that we "ought to take heed" as our youth usher in an "American Fall."

If only it were that simple. Unfortunately, it is difficult to apprehend a cohesive idea of what this so called "occupation" represents — other than chaos.

The idea of "morality" has devolved into the subjective. Everything the occupiers extol represent a stark departure from what was at one time considered moral behavior, replaced only with man's ever shifting tastes, which is a very dangerous thing. Mr. Larson's new concept of morality constitutes a rejection of the principles that once worked in this nation brilliantly.

The media offers what amounts to a "Tale of Two Revolutions" featuring the inevitable comparisons of the "Occupiers" with the "Tea Party."

The Tea Party gatherings, inspired by the American colonist's rebellion against imperial taxation without representation, serve as an apt metaphor for a new protest aimed at an American government exceeding it's purpose. A type of protest based on a model that actually proved successful.

From the myriad interviews I have watched of occupiers, I have been unable to fathom any cohesive ideas or goals expected from this exercise. I have nonetheless seen a great many placards extolling the virtues of socialism/communism. If the youth are basing their protest on the actions of foreign dissident's models, it is decidedly sandy ground in which to build upon as they are models that have never proved successful.

Without a clear vision every movement is doomed to fail, quite often ending in calamities sometimes measured in human lives. The vision behind the "Wall Street Occupation" is myopic and indicative of powers behind the scenes using youthful enthusiasm fueled by a romanticized misunderstanding of events in places of true oppression, to further subversive intent aimed at harming America.

King James was a moderate when it came to Catholics in his realm. That of course all changed after the Catholic Church's repeated attempts on his life. The misguided gunpowder treason had the effect of making things bad for Catholics in England.

Unlike the Tea Party, whose goal is correction and a return to the right path that made this nation the envy of the world, the present attempt to occupy is designed to transform America into something if achieved, the yahoos involved would truly hate, which is a nation more akin to the scorched earth approach tried by Fawkes and his cohorts. If unlike their hero Fawkes, the occupiers succeed, they can kiss their much beloved Apple gear goodbye.