October 31, 2011
For we wrestle not against flesh and blood, but against principalities, against powers, against the rulers of the darkness of this world, against spiritual wickedness in high places. Ephesians 6:12 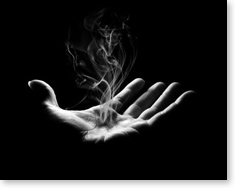 Every great movement in history resulting in "change," either positive or catastrophic, began with either conspiracy, or collaboration. Indeed, at the very beginning of time the serpent conspired with Eve, resulting in a catastrophe of...Biblical proportion.

The Founding Fathers collaborated with each other in securing our independence from a tyrannical king and formed the greatest nation the world has ever seen. The Founders understood that if they were going to form "a more perfect union," they needed to work together.

It is the end result of collaboration or conspiracy that determines whether the source of either one was benevolent or sinister. Moreover, the methods employed are telling as well. Conspirators connive; they do in secret the things they know will not stand up to moral scrutiny. Anything is acceptable as long as it helps the conspirator meet the goal.

Collaborators or co-laborers, have no need to hide their work because their cause is just. In doing the right thing there is nothing to be ashamed of and a collaborator can be totally above board. A co-laborer may have to hold the cards close to the vest until the proper time to spring into action, but there is no worry that any action will be perceived as immoral.

Just as we "know the tree by the fruit" it bears, we should also be mindful that there is righteous seed and bad seed. Bad seed may produce a tree baring fruit that is pleasant to the eye, but when harvested, the yield is revealed to be bitter and unwholesome.

I began this article by quoting Ephesians 6:12, where God warns His people that the woes of the world, even from the very beginning, find their source in Satan. We're not fighting against mere men, but rather those influenced by Satan. God even arranged this verses' address in the Holy Bible with significance. Verse 6:12, or 6:6+6. God really wants the reader to get the point.

It is also significant that on November 5th, 2008, the day America awoke to celebrate the election of Barack Obama — in his home state of Illinois — that evening the lottery number was 666. An interesting coincidence?

I do not believe that Barack Obama is the anti-Christ. I do believe that he, and the overwhelming majority in his party, knowingly or unwittingly represent a dark force.

A good magician is adept at misdirection. An able illusionist can force the observer's attention towards an innocuously occupied hand, while he works his trick with the unseen hand. This is how conspiracy works. The conspirator directs toward one thing, causing the deception to go unnoticed.

A good example of how this works would be the question of Barack Obama's eligibility to hold the office of President of the United States. The connivers have kept the discussion relegated to whether or not Mr. Obama was born in Hawaii and therefore a citizen. This gave rise to the birth certificate issue.

The President and his people proved marvelously adroit at keeping America focused on whether he had a legitimate American birth certificate. First, by only releasing the short form, the President gained two years of people speculating and demanding to see the long form.

All during this time the media on both sides of the political spectrum denounced anyone who thought this was an important issue. Marginalizing the curious, calling them "Birthers." Framing them as racists unhappy with a Black president — or just plain kooks.

It is worth noting that the calls for Mr. Obama's birth certificate have their origin in the Democrat Party. It was Clinton operative Phillip Berg, a Philadelphia attorney, former chair of the Democratic Party in Montgomery County, Pennsylvania, who first filed suit alleging Mr. Obama's lack of eligibility.

Berg's suit, filed against Senator Barack Obama, the Democratic National Committee, and the Federal Election Commission, sought to put a halt to Mr. Obama's candidacy and to stop the DNC from nominating him based on eligibility. Or at least that is what they wanted America to think.

Berg's suit stated the short form birth certificate provided by the Obama camp is a forgery, and even if Obama is a natural-born citizen, he gave up his citizenship when he was adopted in Indonesia.

Thus, the 'birther' distraction was born. The issue had all but died in the public consciousness, until Donald Trump revised the story just as the Obama administration began applying pressure to Hosni Mubarak in Egypt and Muammar Gaddafi in Libya to step down, which coincided with other dubious movements in the Arab world, prompting the so-called Arab Spring.

People were once again talking about goofy birthers while ignoring the Obama administration's maneuvers elsewhere. At the same time, in the early stages of their campaigns, legitimate Republican candidates were having the air sucked out of them by a ridiculous feint at a candidacy by 'The Donald.'

When it looked as if the birth certificate issue placed the President on the ropes. Suddenly the long form birth certificate appeared and Mr. Obama appeared like a Jove hurling lightning bolts from on high vanquishing his loud-mouthed, follically challenged foe.

Back in 2008, as Phillip Berg flashed the hand with the show us the real birth certificate sign, the unseen hand of the Democrat Party, prior to the nomination, made it nearly impossible for journalists interested in finding precedents for what makes a person eligible to hold the office of President.

It seems, someone with access to Justia.com, the online resource for U.S. legal information used by journalists, attorneys or anyone interested in finding case law, was being scrubbed.

Specifically references to a Supreme Court case, Minor Vs, Happersett, 88 US 162 (1875). The Minor case is the only one in US history to directly define the Constitutional guidelines for Presidential eligibility outlined in Article 2 Section 1. It is unanimous and clear. It defines a "native or natural-born citizen" as a person born in the US to parents who are citizens.

So far on Justia.com there have been some 25 Supreme Court cases that referenced Minor v. Happersett found to be mysteriously altered. 25 files intentionally corrupted leading up to the '08 election and before the Birther phenomenon. This aided in the fog surrounding the eligibility issue.

It doesn't matter if Mr. Obama was born in Hawaii or not, it never did — because we know for a fact that his father was not. Therefore, Barack Obama is ineligible to be President of the United States according to precedent established by unanimous Supreme Court opinion. It is the law of the land.

The action of tampering with the files on justia.com, presenting the world with information represented as unmolested and complete, was done with extreme malice and forethought! All Americans should be enraged at the manipulation. Without regard to political sensibilities this is outrageous.

Most people still haven't heard of what is being called "Justiagate," which speaks to the size and power of the conspiracy. Either way, when exposed to the light eventually everything comes out. What matters is how we react to the revelation.

If President Obama is in fact righteous, he would not have needed unrighteous means to obtain an office that he is not entitled to. Barack Obama says he is a Christian, but he denies the essentials of Christian faith. He has a "form of Godliness" but when he declares there are other ways to God besides Christ and he calls what God calls bad natural, he denies the power thereof. And God commands: "from such turn away."

I do know this, generally when a conspiracy begins to come to light, whatever plan was put in motion is beyond being stopped. Mr. Obama and his party have done great damage to both our country and to the world. I fear the situation in the Middle East and Africa has been manipulated to a point where the Biblical prophecy concerning a concerted Arab and African Islamic attack on Israel is a fait accompli.

Though they join hand to hand, the wicked shall not be unpunished: but the descendants of the righteous shall be delivered. Proverbs 11:21

Leaders like Mubarak and Gaddafi, more interested in their personal ends than those of islam, had to go. Even with a new President that cannot be undone. We need to see to our relationship to Christ Jesus personally, He is right at the door.

"Sow to yourselves in righteousness, reap in mercy; break up your fallow ground: for it is time to seek the LORD, till he come and rain righteousness upon you." Hosea 10:12