November 17, 2011
They are among us! They look like you and me but be not deceived. They shamble en masse in search of places to aimlessly occupy. As their numbers grow, they infect an area and begin to fester. Left unabated, they send up a putrid stench accompanied by a stentorian cacophony. Driven by primal urges, the zuccotti feed, copulate and defecate all in a common area giving rise to pestilence and violence. The fevered minds of the zuccotti formulate incoherent messages giving rise to discordant paradigms which perpetuate their circumstances. All those who seek to communicate and understand these creatures, have their attempts at reason rejected. These brave souls eventually recoil — stunned — minds reeling as they are subjected to one vicious regress after another. Unchecked, the zuccotti will infect your families, your neighbors and friends. We see their withering effect on society as members of the media and left wing political leaders who seem particularly susceptible; regularly succumb to this plague. 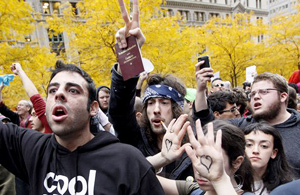 Unlike their un-dead zombie kin, the zuccotti cannot be stopped by delivering force to their heads — the brain is not what motivates them, the Zuccotti brain is too primitive and limited. Their faculties far too underdeveloped compared to the higher operating zombie brain, especially if the subject is infected at an early age. Though it has been observed that when it strikes a more mature victim, brain decay is greatly accelerated until the subject reaches a mental and emotional equilibrium, matching the childlike state exhibited by younger subjects.

This brain atrophying malady strikes and spreads virulently, attacking liberal enclaves. Groups found to be more logical and objective who rely on facts with a firm grip on reality, while completely immune to the fever, are nonetheless burdened with the aftermath of a zuccotti attack.

Knowing the source of this affliction is not nature but rather nurture combined with sin-nature as conceived in the most diabolical leftist labs and think tanks in the world. These sources specialize in confusing feelings with thinking. The heart is deceitful above all things, and desperately wicked: who can know it? Jeremiah 17:9 We must guard our children's minds jealously and raise them up in the admonition of the Lord lest they too slip into the mind numbing clutches of the zuccotti!

Now the Spirit speaketh expressly, that in the latter times some shall depart from the faith, giving heed to seducing spirits, and doctrines of devils; Speaking lies in hypocrisy; having their conscience seared with a hot iron; I Timothy 4:1.2

Ere the rise of the zuccotti