November 28, 2011
It is rather for us to be here dedicated to the great task remaining before us — that from these honored dead we take increased devotion to that cause for which they gave the last full measure of devotion — that we here highly resolve that these dead shall not have died in vain — that this nation, under God, shall have a new birth of freedom — and that government of the people, by the people, for the people, shall not perish from the earth. — Abraham Lincoln

"Let that be your last battlefield!" The concept of 'government of, by and for the people' is an idea that has joined the heavenly choir invisible. It has ceased to be! 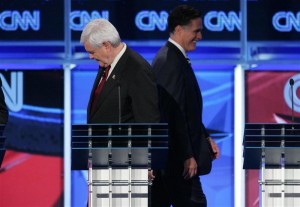 I say that because with the arrival of the 24 hour news cycle — comes the accompanying manipulation, nay rather the shaping of opinion the news cycle affords those with vested interest in seeing the status quo in America be maintained at all costs. Somehow, the establishment — on both the left and the right has managed to neuter the Tea Party movement, nullifying its considerable power and ability to influence the Republican primary process.

The Republican establishment, together with the media Just before the arrival of the primary voting season, has guided the race to the point where the candidates least favored by the Tea Party have now become the Republican Party cause célèbres. All the while marginalizing the Tea Party faithful.

After much hand wringing, weeping and gnashing of teeth — the republican establishment has finally succeeded. They have at last gotten their conservative uncle, who believes in the quaint ideas so fundamental to our once great republic, out of sight — ensconced safely in the rear of the house — where their progressive friends can't see him.

With great gladness, the Sunday morning talking heads were able to declare in no uncertain terms that it is finally coming to a point where it is winnowed out to a two-man race between Mitt Romney and Newt Gingrich. Gleefully, able at long last to be free of having to speak of conservative 'uncles' Herman Cain, Rick Perry or, gasp 'auntie' Michelle Bachmann.

Now the republican establishment and the media can get down to the brass tacks of picking candidates for us — unencumbered by actually discussing candidates with substantive ideas. The media can discuss freely how the upcoming election will be a struggle between the 99% and the 1%. Just the way they like it.

On his website, Mitt Romney's "plan" has exactly 12 pages devoted to tax policy. There is much there bemoaning President Obama and the left's ideas and some lovely charts that illustrate what the problems are, but no charts explaining the impact of his "plan." In short, Romney's near term goal as president will be to:

 Transition to a "territorial" tax system (whatever that means)

Romney pays lip service to things like eliminating death taxes and reducing, not eliminating taxes on savings and investment.

Newt's corporate tax plan reduces Romney's 25% to 12.5% and suggests moving towards a simpler 15% flat tax option for individuals. But like Romney, Newt neglects to explain the real impact, in numbers, of his plan in relatable terms.

Contrast the current frontrunner's plans with the comprehensive clarification provided by Herman Cain when explaining the economic impact of his 999 Plan. Then ask yourself, which candidates are offering mere window dressings to hide the fact their plans will maintain the status quo as well as continuing the excessive reach and power of lobbyists?

The constant refrain heard without end during Herman Cain's rise in the polls was that he could not win because he lacked campaign infrastructure and funding. Never mind Newt Gingrich's senior team quit on him back in June.

I have heard that Mr. Gingrich's people are beginning to return now that Newt is politically a going concern. But this begs the question, or at least it ought to: If, at the beginning, Mr. Gingrich couldn't get his staff to buy in and commit for the long haul, what does that say about his leadership?

When the money began to flow into the Cain campaign — the liberal media and the republican establishment had to switch tactics.

Suddenly there was a bevy of women accusing Mr. Cain of sexual impropriety. The media reacted with ruthless efficiency — the accusers vowed to come together in a joint press conference so they could bolster each other and expose this loutish brute of a man.

Soon Mr. Cain acquired the services of his own well-heeled attorney and a video depicting the results of a voice stress analysis began to make the rounds in the blogosphere and appeared to reveal the dubious nature of Sharon Bialek's testimony. Couple that with the fact that her own former fiancé came forward only to distance himself from Ms. Bialek — it is no wonder the first Cain accusers' joint presser with latter day accuser Karen Kraushaar was abruptly cancelled.

The other ladies never did step forward.   Meanwhile a deathly silence has befallen the Herman Cain as sexual predator meme. It didn't help the ladies cause, or the media's for that matter when it was discovered they both had ties to the Democrat machine. Nevertheless, Herman Cain's character has been besmirched and, after the fact, it appears as if the shallow have little regard for the truth.

After the failure of the sexual harassment controversy, the effort to marginalize Mr. Cain began in earnest. The media worked feverishly to paint him as a fellow with inadequate experience in foreign policy. This narrative peaked with an interview Mr. Cain grated the Milwaukee Journal Sentinel.

During an interview for a print article, Mr. Cain paused to collect his thoughts while answering a question on Libya, not expecting that the interview being taped would be shown to the public. The Milwaukee Sentinel made the pause the story by showing a truncated clip of the interview highlighting Mr. Cain pause. The media framed it, as a sign of confusion and a lack of foreign policy know how.

It doesn't matter that when you watch the full interview Mr. Cain answers the question correctly and that he was also right about his understanding of a union's collective bargaining issue the interviewer tried to gainsay Mr. Cain on. The pause became the story, not Cain's accurate answer to the question.

The wrongheadedness of the notion repeated ad nauseam by the so-called conservative intelligentsia that we ought to back the candidate with the "best chance of winning" as opposed to the candidate with the demonstrably better ideas for addressing our national problems is indicative of where we are as a people.

Most people prefer style over substance, the puffed up and vainglorious, ever ready with quips and professorial diatribes rather than plain talk and directness. Herman Cain's one webpage dedicated to his 999 Plan says more than the dozens of pages on tax reform and fiscal policy found in Romney's downloadable PDF.

I began this offering with the closing paragraph of President Lincoln's Gettysburg Address. The beginning of the address consists of just five sentences. This most treasured of Presidential utterances harkens back to a time when "brevity [was] the soul of wit."

If Newt followed honest Abe in a debate, Mr. Gingrich would essentially say the exact same thing Abe did — only with an allusion to Jerome or Pliny the Elder and a stern rebuke aimed at the moderator thrown in for good measure. I'm certain Mr. Gingrich would most assuredly get a louder round of applause than Abe.

Meanwhile Mitt Romney would beat them both because he 'looks more presidential' despite saying even less than both of his opponents.

Where is our discernment? Where is the Tea Party? Are we really about to prove the Cain Praxis true, that:

"Any truly conservative candidate popular with the grass roots, regardless of competency, is deemed unelectable by conservative leadership in favor of the most generic alternative."

All Herman Cain has done during his forty-year career is take over situations where someone else failed and turned those failures around and made them massive successes. Mr. Cain is a problem solver and isn't that what we need to head the Executive branch?

When I think of our current 'frontrunners' it reminds me of Christ's description of the heady priests of His day:

Then spake Jesus to the multitude, and to his disciples, Saying, The scribes and the Pharisees sit in Moses' seat: All therefore whatsoever they bid you observe, that observe and do; but do not ye after their works: for they say, and do not. For they bind heavy burdens and grievous to be borne, and lay them on men's shoulders; but they themselves will not move them with one of their fingers. But all their works they do for to be seen of men: they make broad their phylacteries, and enlarge the borders of their garments, And love the uppermost rooms at feasts, and the chief seats in the synagogues, Matthew 23: 1-6

Is it really only important that we field a candidate that Karl Rove and Charles Krauthammer and the rest of the establishment thinks has a chance to win? Why aren't we backing the best man available, with the best ideas, throwing our full weight behind him and fighting like our nation's future depends on it?

Snap out of it and put the kettle on — this Tea Party isn't over! Or is it?