Victor Sharpe
The mosques of war

July 1, 2019
"Islamic hatred for Jews and Christians alike dates from Mohammed and is expressed in many passages of the Koran and repeated daily in mosques in every corner of the world." 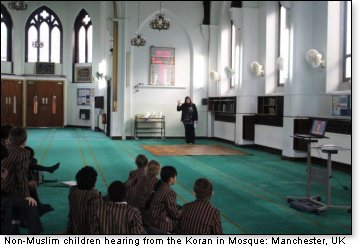 Of the three monotheistic religions, Judaism may be considered the mother faith and the other two, Christianity and Islam, her daughters.

The first daughter, Christianity, under the influence of the early church fathers, rejected the mother and distanced herself from Judaism, even to the extent of changing the Sabbath from the seventh day, Saturday, to Sunday and renaming it the Lord's Day. Seventh-Day Adventists still retain Saturday as the Sabbath.

The youngest daughter, Islam, under Muhammad, turned on both the Jewish and Christian tribes of Arabia, who declined to accept that Muhammad ushered in God's final revelation.

After Rome embraced Christianity under Constantine, the Church fathers increasingly used temporal powers to discriminate against the Jews and proscribe the practice of their faith. For Jews this tragically led to the horrors of the Crusades, the Catholic inquisition, forced conversions, pogroms, and ultimately, the Holocaust.

Islam's followers barely tolerated those they called the "People of the Book," the Jews and Christians, whose faith was based on the Bible. But Islam, too, practiced forced conversions, pogroms, massacres, and the discrimination of Jews and Christians through the practice of dhimmitude, whereby the "infidels" were forced into second-class status and forced to pay a tax, the jizzya, as a penalty for remaining outside Islam while under Muslim occupation.

But history is replete with accounts of both daughter religions fighting each other for centuries over territory and religious domination. When not slaughtering each other, they often turned upon the hapless and stateless Jews, who, for the most part, had no allies and were unable to defend themselves.

The mother has ample reason to weep at the ferocious degradation and scorn her daughters have heaped upon her with such violence and ingratitude. But many Christians – not all – have come to the realization that Biblical Jewish roots are inextricable from their own and that their faith is fatefully incomplete without an acknowledgment of those roots. That is why many Christians now call the Jewish faith their elder brother.

Islam, too, should be immensely indebted to Judaism. According to Abraham I. Katsh, author of Judaism and the Koran,

... like the Jew, the Moslem affirms the unity of God, that He is one, eternal, merciful, compassionate, beneficent, almighty, all-knowing, just, loving and forgiving.

Like Judaism, Islam does not recognize saints serving as mediators between the individual and his Creator and both faiths believe that each individual is to follow a righteous path and secure atonement by improving his or her conduct and by practicing sincere repentance.

But there is another essential and integral part of Islam not shared with Judaism: Jihad. Here we see that ideology becomes supreme, which is why Winston Churchill famously described Islam as, "an ideology wrapped in a religion.


As Katsh points out in his book, originally written as far back as 1954,

...the duty of Jihad, the waging of Holy War, has been raised to the dignity of a sixth canonical obligation, especially by the descendants of the Kharijites. [...]

Between this 'area of warfare' and the Muslim dominated part of the world there can be no peace. Practical considerations may induce the Muslim leaders to conclude an armistice, but the obligation to conquer and, if possible, convert non-Muslims never lapses. Nor can territory once under Muslim rule be lawfully yielded to the unbeliever. Islamic legal theory has gone so far as to define dar al-Islam as any area where at least one Muslim custom is still observed.

Thanks to this concept, the Muslim is required to subdue the infidel, and he who dies in the path of Allah is considered a martyr and assured of Paradise and of unique privileges there.


Here one can understand clearly that peace – true and lasting peace – between Islam and nations that adhere still to Judeo-Christian civilization, or to Hinduism, Buddhism, or all other faiths, is a forlorn and baseless hope.

The "peace process" between Israel and the Palestinian Arabs, for example, is thus a grand illusion, endlessly fostered by Western politicians and diplomats, along with some self-deluded Israeli leaders, who refuse to see a doleful reality that has existed since Islam's creation in the 7th century. In short, there will never be peace so long as Islam controls the minds and hearts of its adherents.

And it is in one abiding respect that this endless spiritual and temporal conflict is seen in its most practical and historical context – the conversion of places of non-Muslim worship into mosques.

The result has been that since the time of Muhammad, synagogues, churches, Hindu and Buddhist temples, Zoroastrian temples, along with pagan shrines have all been violently converted into mosques.

After the conquest of Mecca in the year 630, Muhammad transformed the Black Stone in the Ka'aba, where early pagan Arabs had worshiped, into the paramount Islamic holy place. It became known as the Masjid al-Haram, or Sacred Mosque.

During the Arab invasions of neighboring lands in the Middle East, North Africa, and beyond, under the new banner of Islam, numerous synagogues and churches were converted into mosques. In Damascus, Syria, the church of St. John is now known as the Umayyad Mosque. Also in Syria, the mosque of Job was originally a church.

The Islamic tide swept into Egypt, and many Christian Coptic churches were converted into mosques. From North Africa, the conquests continued into Spain and Portugal, where again churches were converted into mosques. Interestingly, many churches had been built upon the sites of earlier Roman temples. But during the reconquest of the Iberian Peninsula by Christian armies – the Reconquista – these same mosques were reconverted back into churches.

In Gaza, the Great Mosque of Gaza was originally a Christian church. In Turkey, the Hagia Sophia Church was converted in 1453 into a mosque and remained so until 1935, when it became a museum. Under Turkey's Recip Tayit Erdogan, his Islamist party is calling for it to once again become a mosque. Indeed, the Ottoman Turks converted into mosques practically all churches and monasteries in the territories they conquered.

The most well-known mosques are the Al-Aqsa mosque and the Dome of the Rock on Jerusalem's Temple Mount, built upon the site of the two Biblical Jewish Temples.

There are four holy cities of Judaism: Jerusalem, Hebron, Safed, and Tiberias. Hebron is the second-holiest city, and in it is the burial place of the Jewish Patriarchs and Matriarchs, known as the Cave of Machpela, where Abraham and Sarah, Isaac and Rebekah, and Jacob and Leah are buried.

Herod the Great constructed an enclosure for the burial site. During the later Christian Byzantine period, a church was built upon the site, but this was destroyed in 614 by the Persians. Later, the Arab-Muslim invaders built a mosque in its place.

Jews were not permitted to worship at their ancient holy place by the Muslim Arabs. They could only ascend to the seventh step leading to the tombs. Indeed, they were refused this right as a place of worship from the 7th century until 1967, when Israel liberated the ancient Jewish territory from the Jordanian Muslim occupiers. Before the Israeli liberation, a horrifying massacre of Jewish residents in Hebron had been perpetrated by their Muslim neighbors in 1929. This was while Hebron was under the British Mandate of the geographical territory known as Palestine.

Prior to the present-day Palestinian Authority foolishly given control of the city of Nablus, it was the ancient Biblical Jewish city of Shechem in which is the Tomb of the Biblical figure, Joseph, and a place of Jewish pilgrimage. When it was handed over to the PA, as one of the seemingly endless Israeli concessions in the futile hope for peace, the tomb was immediately desecrated by a Muslim mob, which proceeded to convert it into a mosque.

On the Indian subcontinent, Hindu temples were similarly converted into mosques. In so many other parts of the world, considerable hostility – often barely concealed – exists by Muslims towards members of other faiths or those of no faith.

Mosques now occupy vast numbers of places of previous worship by other faiths. In Algeria, the Great Synagogue of Oran is now a mosque after the Jewish population was driven from Algeria. Many other synagogues throughout the Arab world are now mosques after some 850,000 Jews were driven out in 1948 and shortly thereafter.

Islamic hatred for Jews and Christians alike dates from Mohammed and is expressed in many passages of the Koran and repeated daily in mosques in every corner of the world.

In the 1974 invasion of Cyprus by Turkey, many Greek Orthodox churches in northern Cyprus were converted into mosques. Cyprus remains divided with the northern half still illegally occupied by Turkey.

Saudi Arabia and Qatar (pronounced gutter) invest endless billions of petro-dollars to build mosques throughout the world. The international blanketing of cities with mosques is just another expression of jihad. In western Europe, most famously renamed Eurabia by the writer, Bat Yeor, there may soon come a time when there will be more minarets than steeples.

Perhaps the most egregious and blatant example of Islamic triumphalism was the planned construction of a giant mosque in New York City, almost upon the very site where the horrific destruction of the Twin Towers by Muslim terrorists acting in the name of Allah occured.

The proposed mosque was to be opened in 2011 on the very anniversary of the September 11, 2001 atrocity – a flagrant insult to the memory of the thousands of innocents who died at the hands of Muslim fanatics and a grisly paean to a belief in Islamic supremacy.

But this, after all, is what jihad is all about. Subdue the "infidel" at all costs. For Muslims, the Islamic obligation to conquer and convert the unbeliever must never lapse. Its tangible manifestation can be characterized as the "Mosques of War."