February 21, 2011
The lofty, privileged hear-no-evil see-no-evil advantage that Islamofascism has enjoyed in the United States may soon be a thing of the past. For starters, this likely means a look at the Muslim Brotherhood and Islam's persistent and silent invasion of the U.S.

The House Homeland Security Committee is ready to take on the subversives who want Americans dead. 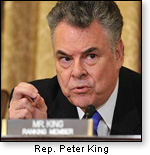 As previously reported in this space, committee chairman Peter King (R-N.Y.) has come under increasing pressure to cancel or water down his planned investigation. The congressman appears to have pushed back.

Chairman King has announced that — as promised — his committee will in fact follow through on — as he put it — "my intention to hold hearings on radicalization of the American Muslim community and homegrown terrorism."

"On March 10, I expect to convene the first hearing," the congressman revealed. "While the witness list has not been finalized, we have interviewed dozens of prospective witnesses. One definite witness will be Dr. Zuhdi Jasser" (an M.D. former Lt. Commander in the U.S. Navy, and recipient of the Meritorious Service Medal).

Dr. Jasser's scheduled testimony in the very early stages of the King committee's probe is reassuring.

Now living in Scottsdale, Arizona, the son of Syrian immigrants has plainly stated his support of American values as spelled out in the Constitution. Jasser is miffed that so many of his fellow Muslim-Americans refuse (for whatever reasons) to speak out against a political ideology that wages war (violent jihad) against the United States.

The native of Neenah, Wisconsin, has outlined much of this frustration in several media interviews. 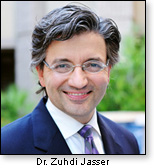 "We are in a civil war," he says, "in which America and the establishment from Obama on down have not taken sides. We don't even want to label it. We're calling it violent extremism, and you can't treat a disease that you can't name."

Dr. Jasser — whose authority as a lead committee witness lies in his having founded the American Islamic Forum for Democracy (AIFD) — describes himself as "somebody who loves his faith" and "looks at the world through an American lens."

Some of the most outspoken Muslim clerics would argue that Islam does in fact sanction violence against "infidels" (meaning the rest of us), and that people such as Jasser are "apostates." One of the reasons so few of Dr. Jasser's fellow Muslims are willing to follow his example and "name the enemy" is that they have been bullied into silence by "peer pressure" (i.e., threats, implied or explicit).

Dr. Jasser is deeply concerned about the democracy movement in Egypt being hijacked by Radical Islam. In an open "Letter to the people of Egypt from an American Muslim," he congratulates them for "the courage and spirit your people have shown the world in these past few weeks."

However, "the freedom you seek," he adds, "will not come from shariah law." Islamists (represented in Egypt by the notorious Muslim Brotherhood) do not "deserve a seat at the table," he warns. "They may eschew violence in order to feign moderation, but their ideology is at its core incompatible with a free Egypt or a secure Middle East. They must be confronted openly," according to Jasser.

The Muslim Brotherhood (MB) is a threat whether in Egypt or on an American campus. The group has had a presence in the U.S. for three generations, says Andrew McCarthy, author of The Grand Jihad: How Islam and the Left Sabotage America. 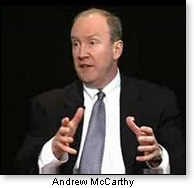 Speaking at this month's annual Conservative Political Action Conference (CPAC), McCarthy showed how the FBI exposed the Muslim Brotherhood, the Muslim Students Association, and the Islamic Society of North America. The author, a former prosecutor, says all three were named by the bureau as "co-conspirators" in the Holy Land Foundation in which the FBI exposed a terrorist threat.

So will the Muslim Brotherhood gain power in Egypt? Ayaan Hirsi Ali — a real international heroine and a literal fugitive from Muslim killers — believes several factors play into that. One of them is "how gullible the U.S. government is, as witness the Director of Intelligence claims that the Muslim Brotherhood [is] secular."

Hopefully, Chairman King's congressional probe may focus on that iron curtain of gullibility within the highest councils of our government.

Illegal aliens: they're not all Latinos

All of this comes just as her own department's statistics show that hundreds of OTMs (other than Mexicans) are apprehended at or near the border each year — some of them terrorists.

Carol M. Swain — professor of political science and professor of law at Vanderbilt University — has done the research, and her findings are frightening — easily worthy of a review in the King committee's investigation.

DHS figures show that while overall illegal Mexican/U.S. border crossings have decreased (possibly because of fewer jobs in the U.S. economy), still apprehensions of OTMs and "special interest aliens" from countries known to sponsor terrorism have actually increased from 57 to 68 percent.

Among the circumstances separating the OTMs from the poverty-stricken Latinos crossing the order is that the former "are vastly more likely to have the resources to employ the most expensive human-smuggling organizations that use the routes where capture is the least likely."

Three days after Secretary Napolitano had assured us that the border problem was decreasing, the U.S. Border Patrol captured Said Jaziri, a radical Islamic cleric hidden in the trunk of a car 50 miles east of San Diego. Professor Swain identifies Jaziri as "one of the imams who had called for the death of a Danish cartoonist who was behind the drawings of the prophet Mohammed." He had reportedly paid a Mexican human-trafficking cartel $5,000 to smuggle him into the United States. His case is just one of many examples of the quiet and largely unnoticed Islam invasion of America.

Chairman King apparently believes terrorism recruiting within the U.S. is on the rise, in part because much of it can be done on the Internet where potential recruits are reached directly in their homes (both here and abroad), according to a report by the Center for Strategic and International Studies.

It is astonishing that in the nearly ten years since 9/11, Congress has conducted a grand total of two days of hearings on the insidious and deadly internal threat of radical Islam (on the Senate side in 2004). That in itself is a scandal.

The lack of any further hearings until now stems from relentless pressure by the organized Islamic community playing on self-conscious American guilt to bully our elected officials into ignoring the war within our borders.

In 1942, German nationals were caught coming ashore from a submarine on Long Island. President Roosevelt gave the order effectively to give them a trial and then execute them. His orders were carried out with dispatch. Things were different then.

Note: This column is indebted to Dr. Jasser's blog, Accuracy in Academia, and Professor Swain's article (with student researcher Saurabh Sharad) in the Washington Times for some of the information in the above report.