June 25, 2012
As is the case with many others who have followed the uniquely anti-American path of this administration, the shock waves emanate not so much from the man himself, but from the mere fact that in his quest for re-election, President Obama remains highly competitive (if polls are to be believed). Is this a result of the mainstream media? Perhaps, though another possibility might be considered. 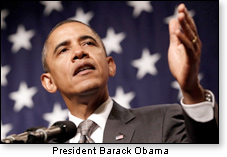 A societal factor driving the president's poll numbers — one suspects — is the failure of the education establishment to pass on to recent generations the basic facts of American history and how our free market works.

In fact, for at least two generations, millions of our children/grandchildren (K through higher ed) have been indoctrinated to view "history" and "economics" through the prism provided by the writings of those who hate this country (i.e., Howard Zinn — see this column, Aug. 9, 2010).

For the moment, partly in an effort to untangle the misinformation surrounding this nations' economic engine, we will explore one plan currently on the table of the public square.

"Many of you in this audience would like to spend every dime [from the Treasury], wouldn't you?" James Gilmore rhetorically asked. The liberals attending his recent politically-mixed conference nodded their heads in affirmation.

That beneficent chain reaction should be chalked on every school kid's classroom blackboard. It's really not very hard.

One would think an "everyone is a winner" tax formula as described above would bring about universal joy across the land so that we could all sing Kumbaya indefinitely into future generations. Alas, the world of realpolitik intervenes.

But that is not Gilmore's problem. His organization is a 501-c-3, which means its donations are tax free in return for non-partisanship. And he has followed that path, not only by including liberals and conservatives in his presentations, but also by soliciting feedback from both the Obama and Romney camps.

The first element of the Growth Code would unify all business taxation in the United States at 15 percent. All business income would be declared on one tax form that treats all businesses the same.

That, of course, would dramatically reduce the corporate tax and eliminate the capital gains and dividend taxes. The upshot of which is that double taxation would be eliminated, which — in turn — would encourage investment (see above chain reaction).

Under the Growth Code, "People will be able to say, 'I've already paid income taxes on this money. Now instead I'm going to re-invest it and create more jobs,'" according to the leader of Free Congress.

In an interview with this column, Jim Gilmore, a former governor of Virginia, says one reason for the current drag on the economy is that the investor currently says "Gee willikers, now I'm going to have to spend that money on paying more tax again.'"

"If we're going to create jobs" — the governor contends — "if you eliminate the double taxation, you're almost begging people to invest the highest and best use of their money. You can buy 'stuff' with your money [thus helping to keep others employed], or we can say we don't want to buy stuff, what we want to do is invest...money back into the economy and create jobs, growth, and an exciting new dynamic in the economy [again, creating even more jobs]." Either way, America wins.

Here, Governor Gilmore gets into what could be called a lesson in Human Nature 101: "What we want to do," he says, "is have an answer when they say 'make it pay for me, make it worth my while'....Other people benefit from that economic activity is the point, not just the person who buys the car or whatever."

As for smaller employers

Here, Free Congress (whose outline has been created by scholars and researchers with credentials that are impeccable) deviates from other conservative proposals that call for an out-and-out flat tax.

FCF economists commissioned to craft the Growth Code have indeed concluded that a flat tax of 15 percent tax from individuals and businesses actually could enable the U.S. Treasury to meet its obligations.

However, in an effort to appeal to both liberals and conservatives, the Washington think tank allows for some progressivity. 10 percent for those on the lowest rung; 15 percent "for the broad middle class"; and 25 percent "for the more well-to-do Americans." 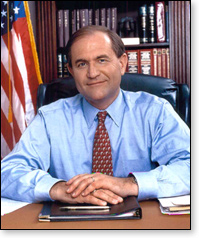 Governor Gilmore says that system "protects against accusations that we're trying to skew the burden downwards. But he does believe everybody with income should pay some tax, as opposed to the current income tax code by which nearly half the taxpayers end up subsidizing the other half.

However, the very poorest in the lower brackets would get what FCF calls the Federal Refundable Tax Credit, the third item in he Growth Code's agenda. It would operate on a sliding scale against a maximum of $4300 (to be paid to those with zero income); or for example for someone making $20,000 would receive a check for $2,000 — or $23,000 (the poverty level) minus $2300. They would still end up paying a 10 percent tax.

Here we run into what many conservatives — including some at Free Congress — view as the plan's "Achilles Heel." Is this another "entitlement" program added to the political equation?

Put it this way: How long before every election turns into a liberal Democrat referendum on "Who was the evil heartless rascal who voted against yet another boost in the Federal Refundable Tax Credit (FRTC)?" Will this be another political club in the trusty liberal closet in the mold of the minimum wage, Social Security, and Medicare, with such clubs to be hauled out in time for each election cycle? Would this be destined to become a variant on the old "Give us power, and we'll give you stuff" goodie-bag politics? The cynical game of "the [political] gift that keeps on giving?"

"It cushions our proposal and makes it implementable," Jim Gilmore reasons. "It could actually pass through the Congress — where Democrats could actually support the program, and feel like they're not leaving people in the lurch in the lower income brackets." He adds that, while many of the reforms proposed in Congress do not appeal across party lines, "We think this could."

At the same time, the envisioned legislation (or Point 4) would do away with the earned income tax credit (viewed by many as a thinly disguised welfare payment). In the long run, FCF's chief believes, "you benefit all citizens, rich and poor [because you] grow jobs."

The Growth Code provides that businesses should be able to write off from their taxes the cost of investment made in the first year, as provided in Point 5.

Gilmore acknowledges that allowing such a write-off for start-up businesses from their taxes will cost some revenue at first, instead of stretching out the expensing over an eight to ten year depreciation schedule. "Right now, people are not willing to invest," he notes, and an immediate write-off of capital equipment would encourage a job-producing investment, with its jump-start to our stalled economy.

BTW, though the Code would eliminate some deductions, the home mortgage deductions would remain, as would those for charitable contributions.

The Growth Code is not presented as the be-all, end-all for righting all the wrongs ailing the economy. Controlling entitlements and reducing spending would no doubt play a role.

Governor Mitt Romney has a tax plan that in some respects resembles the Growth code, but Gilmore adds the GOP presidential candidate's agenda "doesn't reduce the corporate tax to 15 percent, and tries to keep more deductions and credits."

"The guy who would really benefit from this is the president," the governor believes. "If he latched on to the Growth Code, he suddenly would be offering a reasonable future for the American people, which he appears not to be doing right now."

Rank and file Democrats are attracted to the plan. "We know because we've tested it," the FCF chief executive says.

I opined that although the Truman/JFK rank and file of the Democrat Party may like the Growth Code, today's hard-core Democrat base — comprising the activists of the Marxist fringe — does not.

"Well, I'll let you comment on that," Jim Gilmore responds. "But as a 501-c-3 guy, we believe strongly that the Growth Code would be a good program for the Democrats as well as the Republicans. They have many constituencies out there who have a big stake in job creation."

The program loses no revenue for the Treasury, as calculated either by "static analysis" (assuming the tax code does not affect behavior)" or by "dynamic scoring" (which factors in an expected boost in revenue caused by investment in the economy" — the chain reaction again).

Furthermore, the governor confidently adds, "We know the revenue would go up almost fourteen percent."

By anyone's calculation, that's a lot of dimes.