Wes Vernon
The Ruling Class vs. the Country Class: a Utah update

October 24, 2013
Here we go again: The Country Class (meaning principled conservatives who are determined not to leave their children and grandchildren permanently impoverished in a dark, dark world) is under attack by the Ruling Class.

As predictable as the seasonal cycles, the latter always returns to the scene like Dracula so as to resume its royal privileged role. Armed to the teeth with money, influence, and power, they let out a roar intended to bury beneath a mountain of slander and disgrace anyone willing to "stick his neck out" and call out the threat of permanent disaster looming on America's doorstep. We've seen this movie before, haven't we? 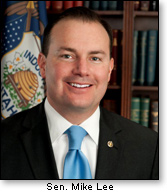 The current object of such scorn is Utah's freshman Senator Mike Lee, who has stepped forward in the fight to defund or delay Obamacare – again in the interest of avoiding the doom plotted and/or facilitated for decades by those whose plans for America are quite foreign to many of us. To help us understand what's going on here, we hereby reprise some warnings included in these pages in previous years.

The Ruling Class is a 2010 book by Dr. Angelo Codevilla (based on his article first in the American Spectator) that differentiated the Ruling Class from the Country Class (the great majority). These two segments of the American population do not share "a single intellectual orthodoxy set of tastes, or lifestyle." The separate paths of these two groups have left America more deeply divided today than at any time since the years prior to the Civil War.

The battleground shifts in emphasis on issues. In the current version of this never-ending intellectual "war," the basic conflict pits elite influential "pragmatists" against the great swath of Americans who, for example, don't necessarily think it is bad to raise large families; who play by the rules; who don't appreciate the ridicule from an increasingly super-secular media, entertainment, and education establishment; and above all, who think it is high time someone in Washington made "noise" about how this nation – $17 trillion in debt – can, in good conscience, continue to relegate our heirs to a living hell so we can live it up today.

Again, this is a rough outline of the Country vs. the Ruling Class. Although issues and circumstances can vary, general attitudes are identifiable. (A more in-depth explanation of this phenomenon can be found in Dr. Cordova's book or magazine article, or even in some 2010 discussions in this column – starting August 23, 2010.) 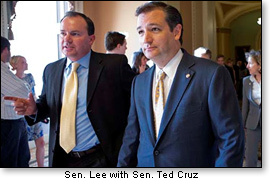 As noted above, the state of Utah (with which I have some roots, history, and fond memories) has the good fortune to be represented in the United States Senate by a brilliant young attorney (age 39 when elected in 2010) named Mike Lee. He has played a leading role with Senator Ted Cruz and others to stand athwart the indebtedness and Obamacare train wreck and yell "Stop!" – to borrow an old expression (in a similar context) by the late William F. Buckley, Jr. (raised in a partially Ruling Class environment, but with Country Class values).

Ruling Class media to the rescue

As Senator Lee's leading role in this fight has grown nationwide, it was inevitable that the Ruling Class would peer down its nose at the upstart from that Deep Red state, and gin up the propaganda machine to take him out.

What better outlet to carry this water than the ever-reliable Washington Post?

This week, the powerhouse newspaper of the nation's capitol informs its readers, "Utah, one of the most Republican states in the nation, has a long tradition of being represented by pragmatic business-minded conservatives in the U.S. Senate. Lee broke that pattern by governing as an ideological firebrand."

Got that? The Post defines former three-term Senator Robert F. Bennett as "a longtime" "business-minded" senator (so he was crowned senator for life?), but Lee, who "toppled" him, is an "ideological firebrand." Thus is another lawmaker (trying to represent the interests of Main Street and the Moms and Pops of his state) targeted by the Ruling Class's poison pen. (That "firebrand" characterization is a trigger word, and the writer knew it. It appeared without quotation marks in a supposedly straight news story, not in an opinion-piece.)

We are informed by the Post that Senator Lee's activity of doing exactly what he said he would do during the campaign has prompted "local business leaders and executives" to discuss "the possibility of mounting a primary challenge against him."

Ah! So who are these "local leaders?" Surely that is a reference to operators of restaurants, service station franchises, small hotels, motels, clothing stores, etc., that dot the streets and malls of Salt Lake City, Ogden, Logan, Lehi, Provo, Springville, Price, Helper, Kanab, and Cedar City. No? 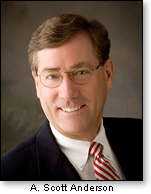 Reporter Philip Rucker directs us instead to – "the executive floor of Zion's Bank," founded during the state's pioneer days of the 19th century. You could not pick a more "right out of Central Casting" icon of "Ruling Class" influence. Can A. Scott Anderson, Zion's Bank President, make trouble for Lee's re-election campaign in 2016? Indeed he can, and you can trust the establishment media to encourage him and other "prominent leaders" to pour money into the efforts of their chosen nomination opponent should they decide to go that route.

This scenario prompts memories of the 1940 movie Mr. Smith Goes to Washington, wherein the namesake character played by Jimmy Stewart upsets some cozy secretive deals in Washington, and soon finds himself mowed down (figuratively) by influential groups in his home territory.

Such drama has not happened to Senator Lee – yet. But all the telltale signs are there of the familiar knives being sharpened.

Much of the complaint is focused on the government shutdown, which was linked to the effort to stop Obamacare.

We do hasten to add that one can understand Utahns' concern about the effect of the shutdown on the state's tourism and employment issues, as national parks are shuttered and thousands of employees at military properties are furloughed, while the Obama administration (the Obama Spite House?) has issued orders to make certain that people are made as miserable as possible as a result. But concern for the here and now is human nature. 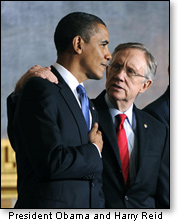 1 – It is unreasonable – notwithstanding the media's successful, but false narrative – to put the lion's share of the blame on Lee and his allies. President Obama and Harry Reid deliberately allowed the question of providing money to fund Obamacare to reach the point at which the House's constitutional responsibility to initiate (or not) the funding mechanism for government – such as Obamacare – was effectively circumvented. The president's refusal to negotiate is arguably a case of neglect of duty.

2 – The totally wrong impression has been conveyed that Obamacare is just another one of those "win-some, lose-some" issues that crop up all the time. Not so. This so-called "health care" law is the ultimate factor in the effort to facilitate the "transformation" from the America we know and love to that of a socialist republic. That is not alarmism. It is fact, as history records.

In Margaret Thatcher's eleven years as Prime Minister of the U.K., she would have loved to have "undone" Britain's socialist medicine system. But she could not because once you take the leap, there is no going back. You can't abolish an entitlement program deeply ingrained in the national infrastructure involving so many.

Despite its unpopularity, Obama goes ahead with the plan precisely for that reason. He knows that once it's in place, it is there forever. Compare that permanent nightmare (abolishing freedom not just in health care but inevitably in many other spheres as well) as opposed to 16 days of a government shutdown, inconvenient as that may be. And again, this is not to belittle the pains of the here and now.

Viewed in that context, one can consider Lee's comment that the number that worries him most "is how many people are being hurt by Obamacare."

Senator Lee's 2010 election has led to a serious effort by the Ruling Class to alter Utah's nominating process. (This is on the order of – "Gee do you mean to say that a U.S. Senator was picked by a process that negated our ability to buy the result? You say those vulgar plebeians are allowed to have their say?")

A key player in the drive to change the nominating procedure is Mike Leavitt, a former governor and close advisor to Mitt Romney (P.S. – And how did that work out?).

During the nominating process of 2010, the Ruling Class deployed a tactic involving a dirty trickster whose antics were traced to the camp of Senator Bennett, the soon to be ousted incumbent.

Then candidate Lee took his complaint of the skullduggery to the Federal Election Commission. I have visited that agency (created in the aftermath of Watergate), and found the people there to be polite and accommodating, but constantly on a tight-rope trying to navigate or referee the he-said/he-said of political warfare. The navigation proceeds in a gingerly fashion. (Most infamously, that was not the case in an Illinois Senate race when Lois Lerner was there, but her strong-arm tactics may have chastened today's FEC in an opposite direction. They do say one extreme can bring about the other.)

So now, the Templegate case remains "under investigation," possibly – one might surmise – until after 2016 when Senator Lee faces re-election.

So here we go again. Socialized medicine is at our doorstep. But the hot seat is reserved not for those who are steering us in the direction of less freedom. You see, the script says it is those who resist that mischief are to be placed on defense. Mike Lee is but one example. You just wait. The coming months and years are going to be nasty.