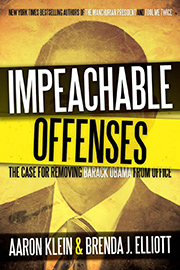 Nearly everyone in Washington agrees that – at the very least – President Obama loosely interprets the Constitution. Many are frustrated that he deliberately and egregiously ignores America's fundamental document in jaw-dropping proportions.

"Impeachable Offenses: The Case for Removing Barack Obama from Office" adds up the damages, possibly the first to do so, in more than 300 pages between two book covers. Not only is the Constitution relegated to the ash can, but inconvenient laws are ignored, sometimes with relish and often with barely a whimper from the opposition.

In the fourth of their thoroughly researched volumes carpet-tracking the Obama presidency, journalist Aaron Klein and his research partner Brenda J. Elliott present what could easily be the basis for articles of impeachment brought before the U.S. Congress.

They present a dizzying array of instances where the president has overstepped his lawful constitutional authority, while evading many legitimate responsibilities. These have included failure to send forces to the rescue of Americans, four of whom died, when trapped in the poorly guarded U.S. facility in Benghazi (dereliction of duty). The book indicts Mr. Obama for aiding and abetting this nation's sworn enemies, as in assistance to the Muslim Brotherhood in Egypt and elsewhere. That pattern, write the authors, would work "to the great detriment of our country's so-called war on terror."

Then there is the Fast and Furious scandal, dubbed by the authors as "the impeachable scheme that armed Mexican drug dealers while executive actions currently aim to push gun control on American citizens." In fact, it is widely suspected the former was hatched as a scheme to arouse public demand for the latter.

Fast and Furious has never been cogently explained, even though it resulted in the killing of U.S. Border Patrol agent Brian Terry and hundreds of other killings in Mexico. "Impeachable Offenses" detects obstruction of justice and perjury in connection with the U.S.-instigated killings.

To quote a Fast and Furious whistleblower, "There is no telling how many crimes will be committed before we retrieve [those guns]."

The list goes on: De facto amnesty to millions of illegal aliens; releasing from prison criminal aliens beyond what is already known; power grabs encroaching on the privacy of citizens by encouraging the advancement of a surveillance society; cronyism involving the transfer of funds to "green" ventures (Solyndra, et al.) that misuse taxpayer money; illegally involving the United States (through NATO) in military ventures without the required green light from Congress; expanding the power and authority of the Internal Revenue Service and other agencies. 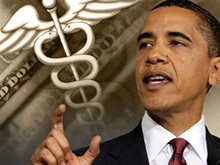 Obamacare is unconstitutional in and of itself. The president and his appointees have compounded that by amending its provisions by executive fiat, rather than going back to Congress – the legislative branch whose exclusive prerogative it is to amend the legislation that it passes. How many times does the president get to ride roughshod over an equal branch of government before someone, somewhere stands up and holds him accountable?

Here's another example: The new law calls for establishing a Patient-centered Outcome Research Institute, whose purpose is to carry out "comparative clinical effectiveness research." That bureaucratese means the health secretary "may not use research and data from the new institute in a manner that treats the life of an elderly, disabled or terminally ill individual as lower than that of the younger or non-disabled patient."

Sounds reasonable, but – there is a "qualifier," one that the authors find "concerning." It leaves the secretary with authority to use such data to determine if "alternative treatments" are effective in extending the life of the elderly, disabled, or terminally ill."

Even some close to the Obama administration and others, according to the authors, admit Obamacare will lead to rationing. One op-ed essayist for The New York Times, Steven Rattner proclaimed, "We need death panels."

There are many passages in the bill requiring "fine tuning" by the people's senators and representatives elected to legislate. Mr. Obama has assumed an authority to act unilaterally, though, ignoring the Constitution, an impeachable offense.

This book misses almost nothing in outlining the routine day-to-day devaluating of the founding document that grants us our rights as citizens. Mr. Obama has publicly stated he thinks the Constitution places too much emphasis on what the government may not do to us, and not enough about what it can do. Many Americans like it that way, and think the president is bound by its provisions, even those he does not like.

What "Impeachable Offenses" does not do is offer some kind of guidance as to how to overcome the political barriers to a full impeachment of this president. No politician wants to "go first" in fielding the avalanche of smears and accusations certain to be dumped on anyone seeking to hold accountable a political figure who happens to be the first ethnic minority president. The Constitution is silent on what happens then.