Arlen Williams
Execution of Obama's speech to students, violating constitutional rights, by usurping powers
An article about an article, about a radio report - about the beginnings of treason

September 4, 2009
There are at least three problems in Obama's predictably ministerial ploy upon America's educational complex and upon our children: 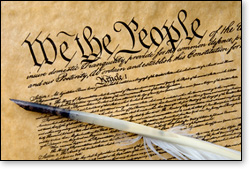 Presented below is the blog, American Daughter's initial report on problem number one, the effective abrogation of federal and state constitutions, by Barack Obama and the Department of Education.

by Nancy Matthis at American Daughter

Ignoring school superintendents, Obama wrote to school principals announcing his forthcoming speech to school children. This is a serious breach of protocol. All communications should be routed through the Superintendent of Schools for each district.

Not only was this bad manners bigtime, it has implications for states' rights and local rights that go far beyond the one event. School districts are overseen by a School Board, usually elected by the citizens of the district. Voters expect that board to ensure an education that reflects their values and goals for their children. From an eHow campaign advisory:

Public education is one of our most crucial institutions. Participating in the body that oversees the policies and procedures governing schools is a major task ... To get elected to the school board ... know the concerns of the community and clarify how you can help achieve the goals and represent their values.

By deliberately cutting the local school boards and the superintendents out of the loop, Obama is essentially bypassing the voters, including parents. He is establishing a precedent for federal control of the children, for making them wards of the federal authority. This is totally a page out of the Marxist playbook that Obama and his office mate terrorist Bill Ayers used in Chicago.

Most of the controversy surrounding his scheduled speech and the lesson plan outlines prepared for teachers to use with it has been concern about the content of his remarks. Like a magician, education czar Arne Duncan has kept the American public focused on the rabbit in the tophat, waiting to see what it looks like when pulled out. If Obama's speech turns out to be a pep talk about staying in school, working hard, and achieving goals, the American public will breathe a collective sigh of relief and think that nothing has gone wrong.

But the damage has already been accomplished in the process. Barack Hussein Obama communicated directly with all of the country's school principals, and got them to march in lock step, without anyone screaming about the school boards being bypassed. The first step of the Marxist game plan is complete.


In our first article, Parents, Should You Be Worried?, we gave all the details about the scheduled speech, the letter to principals, and the lesson plans for grades K-6 and 7-12. We also itemized the parallels between Obama's methods and those Hitler used to entrain the minds of German youth.

Our second article, P.A.S.S. and Twitter Power, described the response of parents, many of whom plan to keep their children home from school when Obama speaks.

Radio station 100.7 FM WFLA in Tallahassee linked to our first article. Their 7:30AM talk show was about parents' reactions, and is worth a listen. It will probably be available for the rest of today.

Why did I say that this was a predictable and "ministerial" move, by Obama? Because, by definition, that is the way in which Marxists and fascists operate, i.e., by central, governmental control, through various ministries. If you have been following the development of the Obama administration, you are seeing numerous other endeavors for ministerial control. Through the cabinet and through the "czars," Barack Obama is attempting to impose this form of governmental tyranny upon America, in violation of the principles of the Declaration and the People's foundationally mandated design of our method of self-governance, proscribed by means of the Constitution.

Such an organized and pervasive assault upon America is literally and thoroughly, treason, whether it comes by trickle, or by flood and whether it is caught in its initial ploys, or further on in the burgeoning injury to the People, inflicted by this insurrection.

Please comment if you think the venue in which you now read should present or link to examinations and explications of just what are the treasons of Marxism, social Darwinism, fascism, anarcho-syndical socialism, progressivism, globalism, and transnational progressivism.