January 22, 2013
Today, January 21, 2013 Barack Obama was sworn in for his second time on not only Abraham Lincoln's Bible but also quite appropriately on Martin Luther King's Bible. As usual, haters of our Republic under God like the American Civil Liberties Union, Freedom From Religion Foundation et.al are having a nuclear meltdown as they decry the needless, stupid and so called egregious mixing of Church and State. These anti-God, anti-Bible, anti-Judeo-Christian Worldview advocates decry such banal practices and traditions at our Inaugurations as an affront to all that is great in America such as "Liberty of conscience" "pluralism" and "diversity." Such is not the case. Our Founders created a Republic under God that profoundly 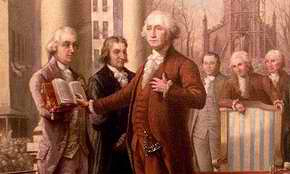 understood the God governs in the affairs of men and that while the Governments job was not to be the Church it's job was not to be against the Church. Our Founders understood that government can only be as good as those who are governing and they stressed the importance that they should be guided and "governed" by the Great Governor of The Universe: Jesus Christ. Either God is THE Sovereign Creator KING of the Universe and King of All Kings, Presidents, Prime Ministers and all rulers or He is not. There is no gobbledygook psycho-babble politically correct in-between. God either governs in the affairs of men or he does not. Our Founders choose to follow a God who is there and intimately involved in our affairs daily! From the Continental Congress in prayer to the their publishing of Bibles in 1777 to Presidential Proclamations of Thanksgiving and Repentance, the God of Israel permeates our History. 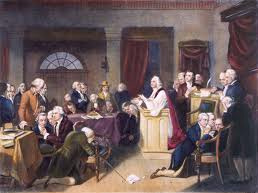 The ACLU, FFRF et.al. not only ignores our great American Christian history, practices and traditions they distort our collective past and are hell bent to take out any mention of our heavenly roots in our culture, institutions and children's textbooks. They are winning the cultural war versus our Christian heritage because they have taken over Hollywood, Government schools, our Universities, Wall Street, Congress and the Media.

The Elite-BIG Media is best exemplified by MSNBC's Lawrence O'Donnel whom spews diatribes against God and the Bible on his programs as he denounces the use of the Bible in the Inauguration and in public affairs. In clever Orwellian fashion he twists and perverts language while he admires President Obama. Obama to O'Donnell is more of a secular-socialist kindred spirit than an antagonist to "the Left wing atheist cause." 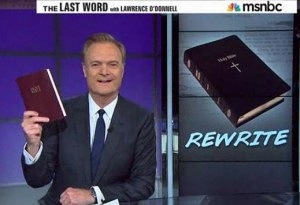 What absolutely drives the Left nuts is that history, empirical evidence and FACTS are ALL on our side. Out of ALL the books ever written in world history we have chosen the Bible to be used in our Inaugurations and other political appointee ceremonies. Why? Because our Founders who used the Bible to build our Republic knew it was the "Holy" Word of the Creator of the Universe, who is called The Supreme Judge of the World in our Declaration of Independence, and who is THE very source of of our Life and Liberty. BIG Hollywood, BIG Government, BIG Media types like Lawrence O'Donnell may hate that FACT but it is a FACT none the less.

For our Republic to survive we must recapture that reality and we must be willing to take on those like MSNBC etc. who lie about our GREAT Republic under God!

Today our Biblical-Scriptural Judeo-Christian Heritage was represented all over the Inauguration as songs where sung that declared "His truth is marching on!" "He shed His grace on thee." It was said by Obama that Life was a "gift from God" and that we were made in God's image and the inaugural prayer was said in Jesus' name.

You may say: "Hey WAIT Jake!" President Obama endorsed Gay marriage marriage again at the Inauguration and called for BIGGER government in more areas of our lives. You are right. BUT That is for another article. Today I am simply reminding Americans that we are a REPUBLIC under God and have a Rich and Wonderful Christian Heritage that have been expressed in our Inaugurations since 1789.

If we continue to lose the War on Christian Culture in America those traditions will sadly fade away and become history. While President Obama may allow them to continue in our great country they are quickly fading away, ignored or ridiculed by the like of Progressives like MSNBC's Lawrence O' Donnell and many other Elites in BIG Media, Politics and Education.

Americans we MUST continue to educate our youth on our Great Republic under God before it is too late! 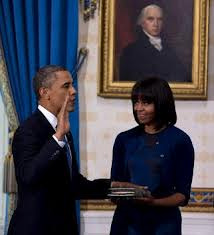