Jake Jacobs
New atheism vs. our republic under God 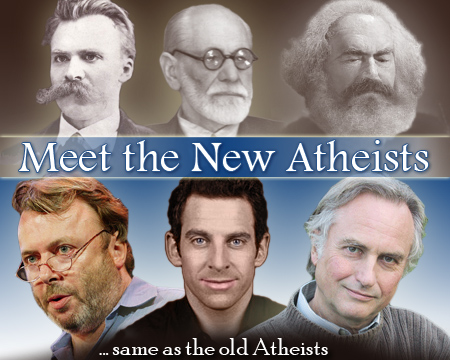 Happy New Year! Happy 2018 A.D. Last week we discussed the meaning of A.D. Anno Domini as "The year of our LORD-Jesus Christ" and how time and our Republic are under our Creator-the LORD-God Jesus Christ.

Since the birth of Christ there as been an effort by an a sundry of atheists to deny Jesus' Deity and there also has been an effort by what scholars call the "New Atheists" to not only deny the Deity of Christ but to deny that the brilliant Founders of America where Christians who believed in Jesus as God.

"The Founding Fathers Were Not Christians"

declare that "The early presidents and patriots were generally Deists or Unitarians, believing in some form of impersonal Providence but rejecting the divinity of Jesus and the absurdities of the Old and New Testaments."

The New Atheist Richard Dawkins, a rock star on college campuses in his book titled "The God Delusion" not only attacks the God of the Holy Scriptures as psychotic and sadomasochistic but he rather foolishly writes, "It is conventional to assume that the Founding Fathers of the American Republic were deists. No doubt many of them were, although it has been argued that the greatest of them might have been atheists. Certainly...most of them would have been atheists in our."

Are you kidding me Doctor Dawkins and FFRF?! Do you really believe such balderdash and poppycock? May I suggest you go to the largest library in the world the "Library of Congress" and look under "Religion and the Founding of the American Republic." Your bogus narrative of our Founders as predominately deists and atheists will be blow out of the water as primary sources in their historical context, of the 1700's and early 1800's show with a preponderance of empirical evidence that the vast overwhelming majority of our Founders and Presidents were Bible believing Christians not Bible rejecting Deists and Atheists.

Out of ALL the books in the world that our Presidents and Congresses could have used to be sworn in on and to make reference to over and over again in our history, the Bible-the Holy Scriptures whose primary story is the story of the GOD-Man Jesus Christ Savior of the world, is THE book they choose to make # 1!

The late Perry Miller an eminent historian on early America, an atheist himself, lays an axe to the lies and distortions disseminated by Doctor Dawkins, FFRF and many university professors when he writes in his book, Nature's Nation,

"Actually, European deism was an exotic plant in America, which never struck roots in the soil. 'Rationalism' was never so widespread as liberal historians, or those fascinated by Jefferson, have imagined. The basic fact is that the Revolution had been preached to the masses as a religious revival, and had the astounding fortune to succeed."

The reason that these New Atheists twist and distort America's Christian history is in their desire to indoctrinate a whole new generation of "True Believers" in the cult of atheism. The first step is to water down the Deity of Jesus Christ and to take away the need to be saved from sin and enter into a personal relationship with the God-Man Jesus. Deism teaches that God is distant, not desiring a personal relationship or a need for redemption and salvation. After you've taken that first step, the slippery slope is into atheism and a total rejection of God especially the personal living-loving God of the Scriptures, the God of Abraham, Isaac and Jacob, the GOD Jesus Christ.

The New Atheists worship reason-or man and his mind as they reject our Creator called the Supreme Judge of the world in our Declaration of Independence. They reject the Creator of reason, man's mind body and soul. Sadly far too many of our schools have been taken over by those who would deny the Christian heritage of our Republic under the God of Israel.

I thank God that schools like Freedom Project Academy exists has they teach the historical correctness of our Nation's Christian heritage and are dedicated to exposing all the politcally correct lies disseminated by the Apostles of Atheism.

This is Jake Jacobs, may the God of Israel-Bless you and may you always remember the truth shall set you free!