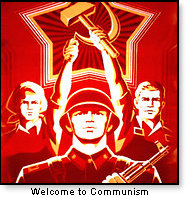 The Communist Party had their working plans to put America under their power back in the 1960's when they created and provoked the "Question Authority" agitation, which later spun into the Hippie movement with 'free love' (sex) everywhere, amplified rock music, and overall sloppiness in the appearance of all. They are however, not to blame for long sentences like this last one.

They not only questioned authority but declared war on it. They determined to destroy all "moral convictions" and made themselves very visible to all. Indeed their conduct resembled something one would find in Satan's Handbook. They changed the entire landscape with their unique sights and sounds.

Respect and honor along with morals all but disappeared. Drugs became a natural activity, along with booze and constant raw sex. It was a familiar sight to see druggies, struggling to walk a straight line down the street. And by the way, the practice of morality and decorum brought strength to America. The reds knew exactly what to dismantle in order to be in the position they are today....even though....temporary.

A dozen people, both men and women lived together in a single apartment. Many walked around barefoot. One thing was obvious, they all needed baths. The flower children however, did bring some beauty to the scene as they gave out a flower and sweet smile to all they met on the street.

Actually this was all on board before the 1960's as all planning and preparing took place behind closed doors that were behind the Iron Curtain. This writer spent time there and personally heard the plans being made. Communists had virtually taken over the motion picture industry and were able to include subtle hints of the superiority of Communist life in their films.

Eugene McCarthy, a Democrat Senator from Oregon, tried to put a stop to this indoctrination, but was vilified by stupid people and the press, who believed that he was harming innocent people who were only trying to make a living.

It is to be noted that the Communists would never give up during the following years. They had one goal in mind and it would stay there until it was accomplished. A one world government under Communist dictatorship. Gotta admire them for their persistence.

FAST FORWARD TO TODAY. After over 50 years, they finally did it. It was a scene right out of Dr. Evil. The idea was to cripple all free countries with a fatal virus, a pandemic which they called Covid 19 or most commonly, The Coronavirus.

Enter Bill Gates, the 'nazi' billionaire whose life goal is to reduce the population of the earth by 10-15%. His father was a eugenicist and president of Planned Parenthood, according to the newsletter of Mat Staver, Chairman of Liberty Counsel Action. There would be no less than 162,000 people eliminated every day.

Gates who thinks he is the leader of our country, while heads of state indulge him, intends to vaccinate every man, woman, and child on earth which will put billions of dollars in the pockets of vaccine investors (like himself). What is incredible, Gates is actually giving the orders to our country today.

Gates also is ready, yes ready now, to put a chip in every human being on earth that contains every bit of information about each one. You will only be able to buy and sell if you have that chip. The Bible talks about this in Revelation 13: 16-18 identifying this individual as 666. Bill Gates is being used to fulfill this prophecy.

Bill Gates and Dr. Anthony Fauci met and immediately found common ground. There is only one way to take over a country. First wreck their economic system while weakening them as a people. Bill Gates gave $1.3 million to Dr. Fauci to go and give that to the Wuhan Lab in China. That money was to be used to create a virus that would cripple the world and then release it.

Again, this was. and is. a man-made virus. It did not just happen. The communists have worked for years to figure out how to put the entire world under their domination. If experts were to examine that virus closely, they will find some man-made elements within it which one would not find in a natural pandemic.

One thing the Communists hate and fear most are the churches. They decided at the beginning, that to take over America they would first have to destroy the churches and Christianity itself. Indeed it became known that the only country standing in the way of this planned 'one world order' is the United States of America. Why? Because a genuine Christian mind cannot be enslaved.

That problem prevented the One World Order since America could not be a part of it due to their minds belonging to God. Meanwhile, the Chinese military was bulldozing churches in China and they tore down every cross that was seen in the cities. Notice that now there is a particular emphasis on shutting down the churches of America.

This pandemic has allowed the communists to rule our country virtually and to say who and what can function during this pandemic that they created and released. They immediately began to sabotage the churches, for our own good, doncha know. They now tell us who can go where, who they can talk to, where they can work, when they can work and even where they live. And it is in America that this outrage is now taking place due to the pandemic they created. Our politicians are seemingly going along with it.

The Communists, through our politicians then skillfully began to give the orders of when or IF we can go back to work. They ordered all public businesses to shut down – which otherwise would help spread the virus say they. It took a lot of time and patience but with this germ warfare they created, which is a declaration of war, they now give all the orders as to where you can come or go, who you can see or talk to, and where you can work. They now are literally in charge of the world.

The above orders now apply to the United States, our country, thanks to the pandemic they created and released.

It was bound to come, so here we are. Now what are we going to do about it?

Not sure of the answer, Liza Hart, who has been spotlighted twice in my column as 'The Female Einstein who took part in the Space Program and has created medical devices that have basically saved lives emailed me her thoughts:

She sent me this answer: Why has all this been going on in America? Not much has changed since King Solomon's time . The answer is the same!

And it shall be answered, Because they forsook the LORD God of their fathers, who brought them forth out of the land of Egypt, and laid hold on other gods, and worshiped them, and served them: therefore has he brought all this evil upon them.

America has forsaken God who made it great in the first place. The only way to truly make America great again is to come back to God!

If my people, who are called by my name, shall humble themselves, and pray, and seek my face, and turn from their wicked ways; then will I hear from heaven, and will forgive their sin, and will heal their land.

Thank you Ms. Liza. I think you have something here.

To see a story on her, click this link: http://www.renewamerica.com/columns/miles/171222