March 20, 2009
When it comes to evil prophecies (i.e. Obama elected president, AND today's news that the spineless president of my Christian alma mater has indeed secured Barack the Butcher to speak at Our Lady's university), no true prophet likes to be right. However, if even a fraction of my following June 11th, 2008, counter attack comes to pass, I know the Gipper (not to mention Ronald Reagan!) will be happy ... and my prayers will have been answered.

"By the time we got to Woodstock, we were half a million strong ..."
-from the song "Woodstock" by Crosby, Stills, Nash and Young

"Anyone who has read the works of Fr. McBrien, and several other professors, knows that there is a threat to (Notre Dame's) Catholicism from within as well. But unlike Harvard or Yale, Northwestern or Southern Cal, all former Christian universities that are now secular schools, Notre Dame has the weapon to fight all heresies, namely Notre Dame Herself ... for the modern infidels to take control here, they would have to blow the Dame off the Dome, rip the heart (the Eucharist) out of Sacred Heart (Church) and lastly, rock by rock, tear the Grotto apart. And legions of Her sons and daughters would willingly die martyrs before they would allow that to happen."
-from "Champions of Faith" by Tom O'Toole 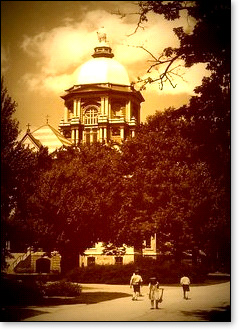 After reading my rather apocalyptic article "From Civil War to Civil Unions," fellow Domer and former head of Illinois Right to Life, John Ryan, whole-heartedly agreed with my gloomy assessment, but then asked, just "Where does Notre Dame stand in relation to this looming civil war?" Specifically, Ryan wondered what the response of orthodox regular and subway alumni should be if Obama won the presidency and ND president, Fr. John Jenkins, extended the university's traditional invitation to the new commander-in-chief to be the keynote speaker at the school's upcoming commencement.

While I definitely agree with Ryan that just as in a game of chess, we should certainly consider our spiritual options several moves ahead, it is also important to realize that Obama, despite what CNN and CNBC (or for that matter, Satan himself) may say, has not yet been elected. The first priority of the pro-life voter remains to petition Our Lady that McCain picks a passionate anti-abortion running mate (hopefully Huckabee, if not the emerging star, Jindal) to strengthen the GOP ticket. Next, we must pray like heck that McCain wins the general election. Still, if those things don't happen, Ryan's question must soon be considered.

Although Ryan's first idea, an all out pro-life media assault on Barack Obama's abortion position in an attempt to get Fr. Jenkins to withhold the ND invitation appears to be the logical initial strategy, I really doubt that such a campaign would make either man change his mind. A backing out on Barack's part would make the president-elect look weak, and if alumni scrutiny didn't make Jenkins cancel the showing of the extremely sleazy Vagina Monologues, no amount of pro-life propheteering would keep him from this woeful choice either. And, while I believe that the holy bishop of South Bend, John M. D'Arcy, would be within his rights to rescind the Catholic charter of the university if Barack were invited (Ryan's final, last ditch idea to keep Obama away), my long-held belief that Our Lady will keep Notre Dame Catholic through troubled times (see opening quote) precludes that possibility  at least for now. But little did I know when I penned that prediction some thirteen years ago that Notre Dame would indeed be the site of the first great battle in our country's second civil war.

Simply put, if the pro-life forces do not take a major stand when the modernist forces of Obama come to captivate (and capture) Notre Dame some one hundred plus days into his deadly presidency, the battle would be lost. As with Woodstock, a loyal force a "half a million strong" might be necessary, but unlike that counter-culture event, this battle would be better planned. Although the remaining true-to-the-faith students and priests could lay the groundwork, including proclaiming their petition (openly, since Jenkins rarely attends) at the 6:45 p.m. daily grotto rosary recitation, the first group of outside forces would arrive approximately a month before the graduation, under the guise of fans attending the annual Notre Dame spring football game. Known only by their Suffering Irish t-shirts, these several thousand or so loyal Domers would remain at Notre Dame after the game, sheltered by sympathetic students, professors, and even grounds crew. This way, they could gain strategic spots in the stadium, Church and even the Administration Building, including one of the little rooms right beneath the Dome.

And so it would go, with groups of ND loyalists arriving undetected with every subsequent baseball game, lacrosse or tennis match, until the main mass of Mary's men were in place. Included in this next group would be the special forces of Our Lady's Army, led by their new commander and recent Catholic convert, General Mike Huckabee. Meanwhile, when D-Day arrived, and thousands more bussed, biked, walked or parachuted their way onto the startled campus, several hundreds of Blessed Mother Teresa's Missionary of Charity sisters get into line behind the marching graduates, and Bishop D'Arcy, monstrance in hand, appears out of nowhere to lead them. And, because it is still a Catholic school, no one seems to question either occurrence.

As President Obama finally approaches the podium, Bishop D'Arcy rises, and raises the monstrance with the Eucharistic Christ right into Obama's sight, temporarily befuddling, if not frightening, the puzzled speaker. This allows the sisters to descend upon the stage, and they begin removing something hidden beneath their habits. No, the nuns have not been smuggling guns, but the aborted fetuses of late term abortions  and murdered live births  that Barack's regime has endorsed, and will soon enforce. As Obama attempts to speak, a voice as if from heaven (but actually Huckabee's), explains what the sisters are doing, telling the stunned crowd to look inside their programs, where the pro-life forces have inserted a page of all of Obama's dubious abortion accomplishments. Finally, as Huck's men silently subdue the Secret Service and the JumboTron focuses on the aborted fetuses, the last nun lays the last broken babe at Obama's feet and then begins to speak. While the crowd now anticipates an alternative commencement speech, the humble sister instead utters but one simple sentence. "Whatsoever you do to the least of my brothers, that you do unto me," she says to the president, and then leaves the stage for good.

At this point, Barack is free to speak, but with the Eucharistic Lord in front of him, the butchered fruit of his labor at his side, and the thousands of protesters now ready to storm the doors, something tells me he cuts his losses and leaves the campus speechless. The evil president flees Notre Dame in shame, while the triumphant forces place a giant wreath of flowers atop Our Lady on the Dome, as thousands cheer the most memorable May crowning ever.

Again, I hope Mr. Obama does not reach the White House, and this all turns out to be entertaining orthodox fiction. But if this vision is neglected and Barack is elected, we must pray to the Son beginning on day one that His Mother's Notre Dame dream comes true.