Tom O'Toole
The blood of the young patriots

April 12, 2009
In remembrance of abortion's helpless victims, I am sharing my poem "The Blood of the Young Patriots," written shortly after 9-11, for your Easter consideration. May the souls of the unborn also rise with Christ, and may we never tire of proclaiming that their present safety is intimately tied to America's future greatness.


+++
"God Bless America" reads the merchant's marquees
For as far and wide as the eye can see
And on the road, "Old Glory's" being bought and sold
At some stands for near the price of gold

Do you recall how the law of "supply and demand"
Routed our native Americans from their own land?
Or how blacks were bought and sold as slaves
And slaughtered if as "equals" they dared behave

Or in WWII, our Japanese citizens sent to prison
Their lands confiscated, their rights in derision
As for my ancestors? Their old photos do not lie
Shop signs back then declared, "No Irish need apply" 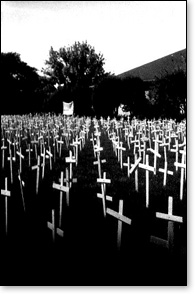 "But Tom, you speak now about all our old ills
Corrected by the strength of our collective wills
Those prejudices are now a part of our past,"
To which I reply to my friend, "Not so fast 

Mother Teresa warned me our country will never be great
Until we stop killing our unborn at such a grand rate"
"Whoa! I'm afraid that you ... are now assumin'
That those ... creatures ... are ... already HUMAN

Surely it can't be that bad ... I mean, after all  "
"Why? Because these babies don't scream when their bodies fall?"
I tell you these helpless young patriots DO feel
And I proclaim that their blood is just as real 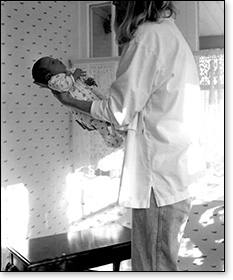 But if my prophesies still strike you as somewhat suspect
For they are far from being politically correct
I hope now, at least, that you can understand
Why I do not wave the flag upon demand

Still, I pray that the day is not yet lost
When I can wave the flag as proudly as I now wear the Cross
And I will again give glory to the "Stars and Stripes"
The moment our Young Patriots regain their rights