Tom O'Toole
Can Woods be(come) good? The lie of the Tiger

December 22, 2009
I observed a young man with no sense
Going along the street...at the time of the dark of night
A bag of money he took with him
not till the full moon will he return home...
Can a man take fire to his bosom
and his garments not be scorched?
...he who commits adultery is a fool;
He who would destroy himself does it.
(Proverbs 6:27, 32; 8:7-8, 20) 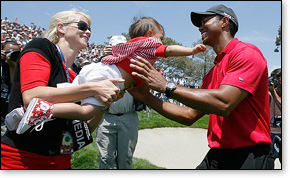 "I feel cheated!" my wife Jeanette lamented (no pun intended) as the Tiger Woods saga snowballed from a minor traffic accident into a major infidelity scandal. Meanwhile, our female chiropractor-acupuncturist, who, like Jeanette had never been a fan of golf until she had been swept away by Tiger's unique blend of talent, determination and charm, exclaimed, "If he's so sick he can't control himself, he at least should have stayed single!" As a huge sports fan (and former Tiger fanatic) myself, I can in many ways relate to my wife's disillusionment. And, while I don't disagree with my doctor's analysis, I'd also say the diagnosis is not so simple.

Now before we get into the "bad" Tiger, it is important to remember why so many spectators admired him in the first place. Woods' discipline to "obtain the perishable crown" (1 Cor 9:25) was perhaps unparalled, and while he had never professed pursuit of the imperishable one Paul talked about, many Christians assumed it was only a matter of time. After all, Tiger had a beautiful wife and two kids, and they always looked so happy as Woods would kiss and embrace them after he had won yet another hard fought tournament. Sadly, in the end we learned that it was not just faith in Christ that Tiger was lacking, but the discipline (and grace) to stay faithful to his wife.

Do we conclude then that the first "lack" led to the second? In an absolute sense, that is certainly true, for as scripture says, those who do not know the Light prefer to live in darkness (see John 3:19-21). On the other hand, Paul reminds us that, "Since the creation of the world, His invisible attributes of eternal power...have been able to be understood...in what he has made," so when Tiger "exchanged the truth of God for a lie," he really had "no excuse" (Romans 1:20,25).

But in response to my chiropractor's retort, I also have to point out that, even in 2009, few men go into marriage with the intention of cheating, especially on such a massive scale. If Tiger's media image of the fairy tale marriage wasn't entirely true, it wasn't completely false either; Tiger's acts of tenderness toward his family were far too real to simply be the result of acting. Still, when it comes to a husband's fidelity, the last few lines of the "Our Father" become key. Not only was Woods, being wealthy, handsome and charismatic, subject to more temptation than the average man can imagine, he, not knowing Christ, was without the means to fight it. And unlike on the golf course, where Tiger had both the tools and talent to get out of trouble, in the arena of lust, he literally didn't have a prayer.

And here, I figure, is where we come in. Although all Christian men possess the perfect prayer to keep us faithful, and Catholic men also have a special grace that comes from the sacrament of marriage to keep us true (CCC 1641-2), few (if any) of us have been flawless in this regard. Sure, we might not have gone all the way, and like Tiger become "an ox that is led to slaughter" (Proverbs 8:22), but despite the "Our Father" and our faith's other advantages, few of us have not been "burned," either through a peek at pornography or a too-long glance at a girl with a dress that barely covered her bosom, or bottom, or both. And since we can all relate to Tiger's sin, I believe it is now our mission to rescue him from a pit where, unlike the dreaded sand trap, he has no clue about how to get out.

As Tiger's never-say-die victories, including a U.S. Open triumph that he won despite playing with a broken leg, inspired many of us to persevere when the odds in our own lives seemed impossible, I believe it is now our turn to pray to the Holy Spirit that God grants Tiger the one gift we possess that he doesn't. In the strict sense, we don't need a Tiger's triumph to get us psyched about life eternal any more than we need the intercession of saints to get us into heaven. But if the transformation of Augustine from pitiful playboy to great saint proved to many that anybody who asks forgiveness can be saved, certainly a Tiger turnaround would show the world that a true Christian marriage can always be salvaged. And besides, since women like a love story where a failed and fallen prince wins back his princess by mending her broken heart even better than the tale of a broken-legged Tiger winning another major, I bet both my wife and doctor "Wood" start watching golf again.