Tom O'Toole
"Playin' for Our Lady?" My reply to Coach Kelly

June 24, 2010
"The priority for our players is to recognize they are at the University of Notre Dame to play for Our Lady"  new head football coach of Notre Dame, Brian Kelly, in his (fundraising) letter to the alumni.

"Father Jenkins' decision [to invite President Obama to speak at Notre Dame and award him an honorary degree] is a deliberate thumbing of the collective nose at the Catholic Church...Notre Dame has forfeited the right to be called a Catholic University"  from recently deceased professor of philosophy, Ralph McInerny, who taught for over 50 years at Notre Dame (and who recalled when the department's teaching was that of the Church). 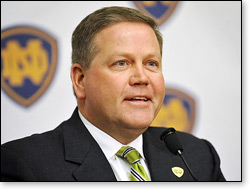 I (along with thousands of other alumni) recently received your letter in the mail, and something you wrote got me so excited I instantly knew I had to respond, although perhaps not in the way you or the Board of Trustees intended. Indeed, the fact that your letter on Notre Dame football doubled as a University fundraiser was not what impressed me, although on a personal note I suppose you should be flattered, as the powers to be never asked Charlie Weis to do so, probably because (based on Coach Weis' last three seasons) many of us would have instead asked Charlie for refunds if he had. And, while I admire the fact that "my wife, Paqui and I have...made a $250,000 gift" to Notre Dame to start the ball rolling, I will not be donating any money to the University at this time, and not because I doubt your desire to help our Science Department to find a cure for breast cancer, or even your ability to "return our [football] program to a level of national prominence." But based on what has happened philosophically at Notre Dame in the years corresponding to the era of Fighting Irish Football mediocrity and culminating with their commencement invitation to our nation's most pro-lific pro-choice President ever, I have to question you about the credibility of your incredible "playing for Our Lady" statement before I again make a financial "commitment to Notre Dame's success."

You see, Coach, I have always believed that "playing for Our Lady" was what made Notre Dame football different from that of other traditional gridiron powers (and opponents) Michigan and Southern Cal, and that Mary (and thousands of her devotees) praying for Her team is what made its success special. And, as you probably know, Lou Holtz, Notre Dame's last successful coach, loved Our Lady as much as anyone on campus, not only praying the Rosary daily but often crediting Her for playing an important part in Notre Dame's victories. Still, as much as I'd love to have you "wake up the echoes" concerning the school and the team's Christian mission, I have two problems with you making the "Our Lady statement" about Notre Dame at this time, the summer of 2010. First, starting with Fr. Hesburgh's shift in the late 1960s to stress academic excellence over fidelity to Rome, and commencing with last year's invitation/honoring of Obama in direct defiance of the U.S. Bishops' ultimatum, there are grave doubts that Notre Dame can even honestly be called a Catholic University, let alone "Our Lady." Secondly, you yourself have been hounded by rumors that you are (or were) pro-choice, a question you have until now refused to answer, but at Notre Dame, can no longer continue to duck. 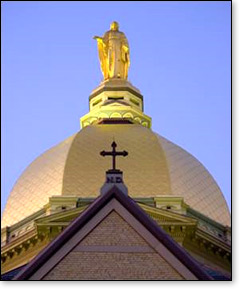 Coach, since the second question is the most personal, let us start with the last dilemma first. When asked if you were pro-life or pro-choice, you tried to dodge the issue by saying you were "pro-football and pro-Notre Dame." While that might work at Cincinnati, a school more low key and less Catholic, you acknowledged that "at Notre Dame you're gonna have everything out on the line," but now you want it both ways. In case you missed it due to your busy coaching schedule, "the Church has affirmed...the inalienable right to life of every innocent human...[that] human life must be respected and protected absolutely from the moment of conception," and that "every procured abortion is a grave...moral evil" (CCC 2270-2273). And, since "the Church attaches the canonical penalty of excommunication to this crime" (CCC 2272) you could see how it would be difficult to tell your charges to play for Our Lady if you yourself were excommunicated from the Church that calls Her "Notre Dame." So while your silence on the abortion subject may be golden when asking alumni to give more gold to your new coaching home, your refusal to answer this question brings no honor to the Lady on the Golden Dome.

On the other hand, Coach, I have to admit the possibility that you already know the position of the Pope on abortion, but have been deluded into believing you can disagree with it and still consider yourself a Catholic. Sadly, Notre Dame, "a leading research university," as the official ND Web site likes to say, is also a leader in this deception. Led by the notorious former head of the ND Theology Department, Fr. Richard McBrien, these wolves in clerical clothing have proposed that since Vatican II, the theories of theologians (especially Fr. McBrien!) carry as much if not more weight than those of the Pope and Magisterium. Coach, Pope Paul VI correctly labeled this dualism "the smoke of Satan," but if McBrien's (and now Jenkins') smoke and mirrors still confuse you, let me give you a practical example. Back in 1955 when McInerny joined the Notre Dame faculty, the entire Philosophy Department was devoted to the Catholic apologetics of St. Thomas Aquinas. But by the time he retired two years ago, the ND Philosophy Department equally endorsed the teachings of St. Thomas and Karl Marx, as well as every Freud and/or fraud in between. Thus, while McInerny's musings were always aimed at getting students to know (and believe) in Christ, the stated agenda of his Atheist colleagues was to lure students away from Him. Certainly, Coach, you know a team could never thrive under such divisions, so how could a University, dedicated to Christ through Mary, be expected to survive them?

Coach, your letter "challenged" me to show my "passion," and, having done so, I now challenge you to show yours. While you are deciding, I will predict that if you publicly affirm the Church's teaching on Life, the "playing for Our Lady" stuff will all fall into place. Unlike Davie or Willingham, who as Protestants couldn't be expected to articulate this theology, or even Weis, who had a certain Catholic charism for coaching but not your charisma, as a believing Catholic you could even make Holtz's gift of gab look drab by comparison. For while Lou said the Rosary, you could lead the team in its recitation. And although Weis got the team to sing "Notre Dame Our Mother" after home games, you could explain what "Notre Dame Our Mother" means, how Mary, as the team's #1 fan, will pray them through the game's toughest plays as long as they never give up and always give God the glory. Of course, Coach, you first have to concentrate on making the team Catholic, but if the rest of the University does not follow your team's lead to "play for Mary," you could start speaking out against Jenkins and his cronies too. For I figure by that time the team will be winning, and as much as it may sting, after years of football feebleness, the Board of Trustees would be hard pressed to dismiss you for anything, let alone for saying you're in favor of the University upholding traditional Catholic doctrine.

Thanks for your time, Coach. And know that, if the team ever does go back to playing for Our Lady, thousands of Her loyal sons and daughters will not only pray for Notre Dame, but again lend our financial support as well. Go Irish!