Tom O'Toole
Beyond the "grave": A father's (and mother's) statement about Euteneuer and their gravely harmed daughter

You duped me, O LORD, and I let myself be duped; you were too strong for me, and you triumphed. All the day I am an object of laughter; everyone mocks me. Whenever I speak, I must cry out, violence and outrage is my message; the word of the LORD has brought me derision and reproach all the day. I say to myself, I will not mention him, I will speak in his name no more. But then it becomes like fire burning in my heart, imprisoned in my bones; I grow weary holding it in, I cannot endure it. — Jeremiah 20:7-9 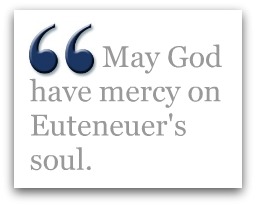 "It's difficult to continue to write about that man, and I can't say that I enjoy it. I would rather be writing about the Irish's [Notre Dame men's basketball] seven-game winning streak," I told the father of the woman whom Father Thomas Euteneuer admitted to abusing. "But since it is God who gave me the ability to write, and He who sends you to me in good faith asking to help you edit and publish a statement about Euteneuer and your daughter, I feel I have no choice." Later, after I had found out this man had graduated from USC, I thought perhaps that God might exempt me from this story, but while the Lord admitted this might be the case if the story concerned Fighting Irish football, my prejudice against the Trojans did not apply here. The statement of the parents reads as follows:

We are the parents of the young woman identified in the public statement of Tom Euteneuer regarding his admission of being in an "inappropriate relationship" in which he "violated the boundaries of chastity" but short of intercourse. We are writing anonymously to protect our daughter's identity; she has been strongly advised to focus on her spiritual and psychological healing at this time, and not subject herself to the further traumatization that publicity would incur. Our daughter's severe difficulties in healing are currently being exacerbated by both the vicious and demeaning statements on the blogs and columns of Euteneuer's adherents and the falsehoods and gross minimization contained in Euteneuer's own (and, to date, only) public mea culpa statement. And, while we agree with Euteneuer that it is nobody's business — save the Church, the victims (and their families), their doctors, and God — to know any further details of what happened (until or unless the victims later decide to file criminal charges against Euteneuer) we can also say our daughter is gravely hurt by the fact that Euteneuer did not personally apologize to her as implied in his statement, and strongly urge him to do so through his bishop.

The Church can attest to the fact that there is a considerable body of documentation and evidence, both from third-party sources and the victims themselves, that contradicts significant elements of the public statement by Euteneuer regarding both the nature and extent of the sexual and psychological abuse Father perpetrated on his victims. Both Human Life International and the Diocese of Palm Beach have investigated the claims of our daughter (and the diocese also has investigated the claims of at least one additional victim) versus the statement of Euteneuer, and have found the victims' statements to be true, especially in contrast to Euteneuer's claim that he prayed (and preyed) alone with the victims only on "rare" occasions. Not only were these "alone" times (for at least part of the session) numerous, but his times alone with them often occurred at the end of an exorcism session when the victims were in an altered cognitive and physiological state and at the most vulnerable, both spiritually and emotionally.

To date, the statements released by HLI and the Diocese of Palm Beach also do not reveal anywhere near the full extent of Euteneuer's abuse, both psychological and sexual, toward his known victims, which includes our daughter. While we would be naive to not admit that part of their restraint is merely due to following the advice of their legal counsel, as both devout Catholics and concerned parents, we hope that some of their caution is out of a genuine concern to prevent further harm to currently known victims and/or to potential new victims. We trust that Church authorities are working diligently to insure that Euteneuer has no further access to his current victims (as he apparently did after being recalled to the Palm Beach Diocese) and pray that he is appropriately and perpetually prohibited from any kind of Church-approved position in which he could abuse his authority as exorcist, spiritual advisor, or priest.

May Our Lord's divine love and the tender love of the Blessed Virgin Mary infuse and envelope the victims, including our daughter, on their lengthy journey to spiritual, psychological, and emotional recovery. May God's grace, combined with the extraordinary strength and courage of our daughter (and other victims), our countless prayers and the tireless work of their doctors and therapists, eventually heal the victims from the abusive behavior perpetuated by Euteneuer. Lastly, believing that the resurrected Christ can bring good even out of great evil, we ask Our Lord that His Church not suffer undue harm from Euteneuer's abusive behaviors and the subsequent public outcry, but that uncovering the Truth in this case actually strengthens the Church's pro-life mission and helps us to better understand the Rite of Exorcism.

May God have mercy on Euteneuer's soul.

After the statement was written, I asked the victim's father (and later, their daughter's lawyer) a few questions about it.

"In your statement, you mentioned 'victims,' while Father — "

"I prefer 'Euteneuer' if you don't mind — our family will not refer to him as 'Father,'" he said with emphasis.

"I understand. Anyway, Euteneuer stated his 'violations of chastity' occurred with 'one person only.' Do you personally know any other victims?"

"I know of two, including our daughter, and have seen documentation about a third," he confided.

"You made it a point in your statement to show that Euteneuer's contention that he was rarely alone with women during the prayer sessions was false. Could you give any indication about how often this happened with your daughter?"

"He prayed with her for two-and-a-half years...she said, and an eyewitness also testified, that they [Euteneuer and his daughter] ended up alone about half the time, and they met at least two or three times most weeks during those two-and-a-half years. You can do the math."

"Many of the people commenting on Father's statement said something to the effect that, since he didn't have sex with her, his 'violations of chastity' weren't that bad," I told him.

A dreadful silence occurred on the other end of the line, and, as the father of a daughter myself, I immediately knew what that silence meant, but the off-the-record statements that followed, in which he described the sexually abusive behaviors in detail, confirmed my fears. "The violations of chastity were...severe. They were..."

Indeed, the conversation was becoming too grave for me, and I turned to my only defense — humor.

"Monsignor Ignacio Barreiro-Carámbula [the interim head of HLI] recently admitted Father caused grave harm to your daughter. I didn't know exactly what 'grave' meant, but then I heard that Euteneuer sometimes took his victims to pray at the graveyard."

Not having a comeback for that comment, he instead ended our conversation with "God bless you, Tom," and bid me to talk with their daughter's lawyer. 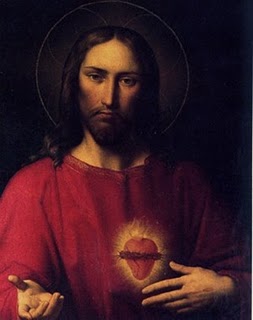 Later, after talking to the lawyer (who personally could only vouch for the two victims he represented, but said he also knew of two financial settlements — something Euteneuer claimed to have no knowledge of — and assured me that Euteneuer, at least for the time being, was under twenty-four hour care), it struck me that the passage I picked from Jeremiah was chosen not just by me to describe my writing dilemma, "to speak his name no more," but chosen by God to describe the conflicted state of the victim herself. Duped then damaged by the fallen priest, she is told to stay out of the fray in order to heal, yet with a heart "on fire" that the Truth now be known, she must trust in her parents (and me) to get her (and His) message out. May the Lord grant you the strength and courage you need to both heal and be heard, girl, and, as I continue to write in order to bring this to Light, may God have mercy on my soul.