[H]usband and wife become in a way one heart and one soul...marriage is a love that is total...[M]arriage must of necessity retain its intrinsic relationship to the procreation of life...[or else] who will prevent public authorities from favoring those contraceptive methods which they consider most effective? Should they regard this as necessary, they may impose their use on everyone. -Pope Paul VI, from the encyclical "Humanae Vitae"


Everybody is guilty of some transgression against conservatism except Santorum. -Rush Limbaugh 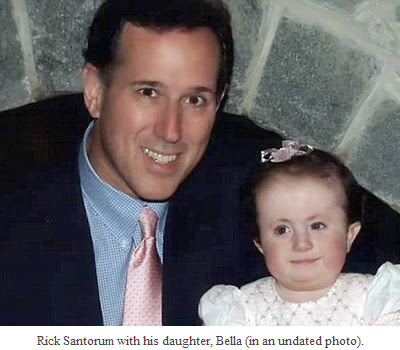 Just as President Obama announced his full-scale war on the Catholic Church, presidential candidate (and the only true conservative Catholic in the race) Rick Santorum, was forced (due to the hospitalization of his special needs daughter, Bella), to withdraw from active campaigning in Florida. Indeed, his third-place 13% showing in the Sunshine State appears to hold an anything-but-sunny hope in his attempt to stop the wealthy Romney's coronation for the Republican nomination. But as the Santorum candidacy heads into February, Bella's miraculous recovery seems to have Santorum believing his 13% on January 31 may prove lucky yet.

Santorum's unshakable optimism that he is the only conservative who can stop the moderate Romney and defeat the increasingly anti-Catholic Obama is based not only on his orthodox Christian faith and the recent "endorsements" of conservative champions such as Limbaugh and Michelle Malkin (who, after calling for prayers for Bella, called Rick "the most conservative candidate still standing," the last man for whom "character and honor still matter") but on the fact that his friend and "Reagan conservative," Newt Gingrich, keeps imploding. True, Newt got 31.9% of the Florida vote compared to 13.4% for Santorum (and 46.4% for Romney) but when you consider Gingrich lost not only the lead but nearly 20% of his Florida voters in a week, things are not exactly looking up for the former Speaker of the House. Mired in controversies ranging from uncharacteristically poor debate performances (in the last debate, after Gingrich blasted Mitt for investing in "Fannie" and "Freddie," Romney then calmly informed Newt that the tax records showed that the former speaker had also invested in "Mae" and "Mac," and Gingrich's goose was cooked) to his over-the-top attack ads on Mitt (including one that said Romney denied kosher food to Jewish holocaust survivors in nursing homes) to being sued by members of the rock group Survivor for the unauthorized use of their hit "Eye of the Tiger," Florida exit polls confirmed that while most voters still considered Gingrich more conservative than Romney, they "no longer liked Newt." On the other hand, polls such as Public Policy Polling not only showed Santorum the most "likable" candidate, but the man with the best chance of defeating Romney between Santorum or Gingrich if one of them dropped out. Of course, that's a big "if."

But if Gingrich can't be persuaded by Santorum's conservatism, perhaps he can be swayed by Rick's Catholicism. When (on Jan. 20) the Obama administration, through heretical Catholic Health and Human Services secretary, Kathleen Sebelius, said that Catholic employers, including all church run schools, hospitals and charities, must provide free contraceptive drugs to its employees, Barack's "culture of death" policies went from a covert war on Catholics to an all out, Hitler-esque call for their extermination. Granted, Humanae Vitae's prediction of forced contraception (and sterilization) hasn't become part of the "Obama solution" yet, but everything else Paul VI predicted (in 1968) would happen in Humanae Vitae if contraception became commonplace, from abortion on demand to man "forget[ting] the reverence due to a woman and reducing her to a mere instrument for the satisfaction of his own desires" (aka widespread pornography), has come to pass, so there's no reason to think that once the monstrous Obamacare is put in place that this won't be next. Sure, many faithful bishops, including Archbishop Timothy Dolan of New York, who denounced the mandate as "unconscionable," saying Obama is forcing the Church "to act as if pregnancy is a disease to be prevented at all costs," have already joined the fight, but surely the battle would be much easier if one of their generals would recapture that once-mighty fortress of liberty, the White House. And who better than the Catholic candidate who not only consistently talked the pro-life talk, but long has walked the walk.

Still, it doesn't get any easier for Santorum, because before potentially more favorable match-ups in Minnesota, Missouri or Colorado, Rick has a Saturday date in Vegas. On the surface, it's another bad fit for the conservative Santorum, as the libertarian forces in Nevada (including the Moonlite Bunny Ranch, where "most of the girls are pimpin' for Paul") enthusiastically "back" the crusty Texas congressman, while the state's significant Mormon population (up to 25% of the state's Republican caucus goers are LDS) blindly follow Mitt's cult. But in the spirit of taking the good fight to the gambling state, I bought a one-dollar scratch-off lottery ticket yesterday, in the hopes of sending some winnings to my pick Rick. As it turned out, my "lucky" number, 13, was the same as Santorum's percentage in Florida, and I matched it — twice. While I did double my investment, the two dollars I won probably won't turn Santorum's campaign around, but if this is an omen that Santorum will double his support, either through voters seeing through Romney, or Gingrich dropping, we'll both be happy. Meanwhile, my wife, Jeanette, and I will continue following the strategy of Paul (the pope, not the congressman) praying to Christ and receiving the Eucharist to strengthen ourselves for the upcoming primaries — and presidential election. For although a gamble may pay off in the short run, in the ultimate battle of good v. evil, luck is not enough.