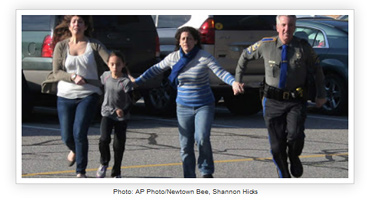 It was an unseasonably warm and sunny day, and I was off to supplement (or supplant) my meagre Catholic writer's earnings for the month by working as a substitute teacher. Although I more often subbed in middle or high school, I was to work today at one of the district's award-winning grade schools, not unlike the one a Connecticut mother often worked at to help provide for her bright but autistic son...

The day was going well, although my lunchtime reading of the brutal conclusion of Elie Wiesel's book, Night, wasn't exactly making my day any brighter. It was then I started to hear mumblings about yet another alleged school shooting, but in my attempt to focus on my work, I tried to block it out, for surely "Newtown" was the same old story.

And this strategy too worked well, at least until I had to spend the last block of my day as a support teacher in a kindergarten class. As I mingled with the children, many the same age as the majority of the Sandy Hook Elementary School victims, I managed to stay composed if not focused for most of the class. But toward the end, something about the kids getting their pictures taken with their parents (many who were helping out at a special holiday celebration) was just too much, and I had to leave the room...

Fortunately, school was about to let out, and for the most part, I successfully fought back the tears as I drove past the kids toward home. And back home, my wife was fully immersed in the deadly drama, lamenting the victims and railing about the O'Toole household's old nemesis, President Barack Obama.

"You should have seen his speech, with its dramatic pauses and tears!" she declared. Two-hundred times as many kids die each day from abortion and that doesn't bother him, but now he's crying tears for the camera."

Not long afterwards the TV was replaying the president's speech, but my reeling mind was unable or simply unwilling to determine whether or not Obama's tears were genuine, although I noted with grim satisfaction that "Fox" had editorialized most of his rather lengthy pregnant pauses out of its presentation. Still, the non-stop news updates were now starting to get to me, and I found myself getting distraught over the strangest details.

For example, the actual number of Adam Lanza's victims, 27 at the school, and 28 total (including his mother), now was ticking me off, for those were MY numbers — the 27th of August being my birthdate and the 28th being the feast date of both my patrons, St. Augustine, August 28, and St. Thomas Aquinas, January 28 — and I felt he had ruined them. I knew I needed to get away from the set, to both work off some negative energy with exercise and build up some positive energy with prayer. So I combined the two, and went on one of my many rosary runs.

My plan was to not only say the mysteries while jogging, but encourage my meditations by running past the several Nativity scenes (which, due to the season's shortened days, would already be lit up) I had scouted out on previous jogs. I had noticed six within my six-mile running radius, which may seem like a decent number, but whose witness was decisively dwarfed by the amount of elves, santas, snowmen, and other secular displays along the way. I soon realized that a couple of plastic manger scenes were not going to cut it with today's tragic events, and I quickly made the decision to seek out the real thing, to make my run an actual pilgrimage past the outdoor Marian shrines and inside Real Presence of Jesus of not one but two Catholic parishes.

Our old parish does not have its outside statue of Mary out front, but tucked away in a rather unusual place. Mary is sort of wedged in a little nook of the parish's combination church/grade school building, perhaps somewhat poignant considering the day's events. Still, it is located literally ten feet off the busy parking lot with little place to pray, and as I approached it in the dark, I was eyed like some sort of weirdo (or worse), a violent intruder, by the many parents who were dropping their kids off for basketball and other after-school activities. Realizing I couldn't stay long without causing a fuss, I made a mental picture of Jesus in the tabernacle just inside, touched the Virgin's foot which was eternally trampling the Snake, and resumed my journey.

We had recently moved, and since we now live virtually across the street from our new parish, it seemed the perfect place to finish my prayer run. Unlike the first parish, this Marian statue was recently moved off the parking lot, to be afforded a special new "home." With my Notre Dame connections, I dreamed of a grotto or at least a nice shrine, but to my surprise she was placed in a Home Depot style open air gazebo. When we first visited Her in Her new secular surroundings, my wife and I kidded that She whispered, "Get me out of here!" but today She was strictly business in listening to my supplications for the victims. Finally, I jogged by the church, and much to my delight, I saw a woman entering the usually-closed building, meaning I would be able to finish my pilgrimage in the actual presence of the "Presence," praying in front of the Blessed Sacrament. But as was often the case on this fateful day, my joy was to be short-lived.

"Can I HELP you!" the elderly woman snarled as I attempted to enter the church. As it turned out, she and another older lady were there to sort the food baskets that were collected for the poor, and she was not taking kindly to any deviation from the plan. When I explained I saw the church door opened and figured I could come in to pray, she reluctantly allowed me in, but I realized my visit would not be much longer than my parking-lot Mary-stop had been. So I quickly recited a Memorare and the Miraculous Medal prayer, just enough praying to get over my initial anger, to realize these ladies didn't see me as the author of Champions of Faith or even the new Catholic in the neighborhood, but another potential Lanza, and considering the day's events, one could hardly blame them.

Despite the setbacks, the pilgrimage did help me to put the day's grim headlines into somewhat of a perspective. I have worked with special needs students for nearly a decade, and have been punched, choked, my eyes poked, and my ribs broken, but I have never been shot. So I cannot comment as one who has lost a child to a madman, or, like Wiesel, as one who watched his father die at the hands of Nazis.

Still, daily prayer has kept me from succumbing to the tempting conclusion that God doesn't exist, is dead, or simply doesn't hear the cries of his children. In light of the latest shootings, all ideas to solve the problem, including mandatory school security and increased help for the mentally unstable, should be considered. But as my wife suggests, in a society that teaches the holocaust of abortion as moral, it becomes too easy for those on the fringes to see other types of mass murder as acceptable. It is not so much a problem of psychology or security, but morality. To paraphrase a line from the movie The Song of Bernadette, for those who don't believe in evil, no explanation is possible. But for those who do, no other explanation is necessary.

What is needed, now more than ever, is prayer.