Basing itself on Sacred Scripture, which presents homosexual acts as acts of grave depravity, tradition has always declared that "homosexual acts are intrinsically disordered." They are contrary to the natural law. They close the sexual act to the gift of life. They do not proceed from a genuine affective and sexual complementarity. Under no circumstances can they be approved..[M]en and women who have deep-seated homosexual tendencies...must be accepted with respect, compassion, and sensitivity. Every sign of unjust discrimination in their regard should be avoided...Homosexual persons are called to chastity. By the virtues of self-mastery that teach them inner freedom, at times by the support of disinterested friendship, by prayer and sacramental grace, they can and should gradually and resolutely approach Christian perfection. (CCC #2357-2359)

I'm very grateful that Notre Dame is right here with me and has completely supported me. If anything does come up, I feel completely taken care of. -Matt Dooley

So for Lent let us begin studying and praying to understand God's wisdom on how each one of us is causing suffering by our personal sins. Then let us use this divine wisdom to address the social, familiar and religious ramifications of these sins. This is true mercy and compassion. Just loving the sinner and letting them go on destroying themselves, their family and society is not compassion or mercy. -Fr. Peter Carota, Traditional Catholic Priest 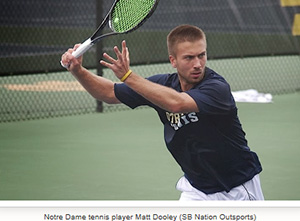 It was one thing to witness the endless parade and accompanying praise of the gay athletes coming out of the closet on their secular college or professional teams. But it is quite another thing when it happens at the alma mater you attended – a school that (at least officially) "prides" itself not on gay rights, but Catholicism. But sadly the saga of Matt Dooley, a story where the Irish could have been a shining example, proved just another case where Notre Dame dropped the ball. In "A life worth living" (a seemingly unintentional, yet tragic parody, of Bishop Fulton J. Sheen's famous TV show), senior Notre Dame tennis player, Matt Dooley, opens up his tale with his suicide attempt during his sophomore year at Notre Dame. He attributes the low self worth that led to his night of pills and heavy drinking to "the mental burdens...associated with being closeted," instead of what Catholic teaching calls the guilt of an unconfessed sin. In Matt's words:


I never once had a moment where I consciously thought, "I'm gay." The revelation was more an encounter with a familiar and intrinsic aspect of my being for which I had no name. I know that from a young age I learned the lesson almost all of us are taught: People are either heterosexual, straight, and good – or homosexual, gay, sinful, and bad.

While my immediate family was never vocally anti-gay throughout my childhood, my family was military and Catholic. Church-going and doctrine-learning were forgone conclusions. It wasn't long before I started to connect the dots and see that some aspects of the Church's teachings were not exactly adding up with where my life was headed.


But if Bishop Sheen is right that millions hate the Catholic Church for what they think it teaches, but only a handful hate it for what it really says, then Matt is dead wrong to state heterosexuality is always good, and all homosexuals are always bad. There are plenty of sins connected to non-sacramental heterosexuality, while the Church has high praise for homosexuals who are chaste. Whether Matt's "church-going and doctrine-learning" family or the University of Notre Dame actually taught Matt these errors, or the devil twisted the Church's teaching around in Matt's troubled mind, is debatable. What IS wrong is that Matt believes the problem was solved not by going into the confessional, but by coming out of the closet – and the so-called Catholic school does nothing to correct this impression.

Like Jason Collins and Michael Sam, Matt Dooley claims everything went from grey to "gay" – the old definition of the word – once his orientation was out in the open. Notre Dame men's tennis coach Ryan Sachire said Dooley's coming out has brought the team closer. "I was humble and proud," said Sachire, "that Matt trusted us enough to share this with us, to reveal his sexual orientation...Here was a guy who was baring his soul," and the reaction on campus and online has been "overwhelmingly positive."

Meanwhile, at Dooley's suggestion, the Notre Dame Student Welfare and Development office has laid the groundwork for an amazing "You Can Play" project (a national social activism campaign dedicated to ensuring "equality, respect, and safety for athletes regardless of race, gender, or sexual orientation") here at Notre Dame, in which EVERY Notre Dame sport will (or must?) participate. It seems that nowhere is heard that discouraging word – sin – or the suffering that is caused by it.

Notre Dame is right to treat Dooley's revelation with compassion, but it is wrong to not show Matt the true source of his "demons"; demons that he admits he still is suffering from daily, even after he came out. Ironically, Matt felt the most relief from his telling teammate, Greg Andrews, about his secret (and Andrews subsequently saying that they were still friends) "because he had no reason to lie." But the fact that none of his priests or teachers apparently have had the guts to tell Matt the rest of the equation, "Neither do I condemn – now go and sin no more [emphasis added]" (John 8:11), speaks volumes of the void at both Notre Dame and in our Nation. While it may be okay for Notre Dame to help Dooley with his "You Can Play" efforts, that must come after his mentor(s) get up the courage to tell him about COURAGE, or the other orthodox Catholic apostolates geared toward gays. As it is, Notre Dame, in Dooley's tennis parlance, performs a "double fault" at "love," for as Father Carota points out, compassion without Truth is not compassion at all, but merely another version of a trick a fallen-angel-turned-snake pulled on an unsuspecting couple long ago.

When I wrote my first article about the gayification of sports, several gays and gay marriage sympathizers wrote that I was taking scriptures out of context to "judge" gays, especially since my hero, Jesus, was a man of meekness who always warned against judging. But when I pointed out texts that clearly showed Christ to be Lord of both mercy and judgement, they quickly changed their tune. The first, Douglas Bunker, actually then agreed with my assessment of Jesus and Saint Paul's teachings before adding the chilling, "But in these times what they say does not count for much. I take from Christ's teachings of what is good and kind. The rest I discard," while the defiant Vance Cooley takes it a step further by saying I cannot judge but he can, declaring, "I'm in my rights to judge you as a bigot and a homophobe, because I don't need a book written by men that had no concept of death, disease and famine 3000 years ago." Although I'm not suggesting Dooley has entered the demented and spiteful camp of Cooley, Matt certainly implies that he now believes that disagreeing with certain Church doctrines and remaining Catholic is acceptable "at one of the most prominent Catholic universities in the world" (as he calls ND), because no one there has told him differently.

Douglas Bunker summarized that, in these times, orthodox Christianity no longer "counts for much," while Vance (not so) Cool-ey hotly spews his conclusion that my warnings are "the last gasp of a dying conservative movement that will eventually be gone from the planet." As dire and ridiculous as these words appear, if Catholic institutions like Notre Dame and Protestant denominations like ______ (insert your favorite liberal Christian denomination here) don't stand up for biblical sexual teachings, the gay praise parade and stampede for same-sex marriage will be hard to stop. Meanwhile, Matt Dooley, still has a few matches left in his Irish career, and I (a walk-on who made the ND tennis team in the late 70s and early 80s) still have some eligibility left...to make the team and meet with Matt...