Wes Vernon
Is it safe to send your child to school?
Part 2-Howard Zinn: Communist liar

Before Communist Howard Zinn died in January, he was actively spearheading an effort to inject his lying version of American history into the innocent heads of little tots almost as soon as they are able to talk.

In December, Deborah Lambert wrote for Accuracy in Academia (AIA) that Hate America Howie was plotting to reach pre-schoolers with a thinly-disguised message that the history of American blacks was best illustrated by "the lynching of African-Americans."

Howard Zinn was a walking, breathing "Truth in labeling" scandal that surpassed anything uncovered by the Consumer Product Safety Commission. Ironically, according to Cliff Kincaid, who smoked out the FBI file on Zinn's Communist record, the "consumer advocate" Ralph Nader (Mr. Disclosure himself) was among the luminaries who had paid tribute to Zinn. (Oops! Nader's consumer-protecting gumshoes "missed" that fraud against unwary consumers of history books, didn't they?)

Mr. Zinn's polemic A People's History of the United States (widely circulated in academia) did not mention that its author had been a dedicated member of the Communist Party USA, whose overall mission included the overthrow of the United States by force and violence (while attempting to achieve the same ends by infiltrating influential American institutions and occupations (such as  well, authoring "history" textbooks). 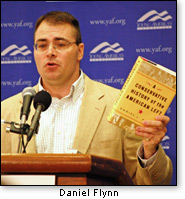 Daniel Flynn  former Director of AIA  has documented Zinn's voluminous prostitution of the very word "history," and how the icons of the Ruling Class fell for it (inadvertently or otherwise).

The New York Times  whose history of Communist whitewashing dates back to at least the early thirties cover-up of Stalin's deliberately induced famines  ran a book review asserting that Zinn's screed should be "required reading" for students.

Many of the locations listed in A People's History's "popular in" book section are college towns such as Binghamton, N.Y.; State College, Pa.; East Lansing, Mich.; and Athens, Ga.

"Based on this," says AIA, "it is reasonable to wonder if most of the million or so copies sold have been done so by coercion."

A course at Evergreen State was described as "an advanced class, and all students should have read Howard Zinn's A People's History of the United States before the first day of class, to give us a common background to begin the class."

That was cited in 2003. Since then, Communist Zinn's vile propaganda has sold more copies and poisoned more kids' minds. Zinn himself made no pretense of objectivity.

"Even if [objectivity] were possible, it would be undesirable," he once remarked, "because if you have some kind of social aim, if you think history should serve society in some way; should serve the progress of the human race, then it requires that you make your selection on the basis of what you think will advance the causes of humanity [even if such selectivity constitutes lying through one's teeth?]." 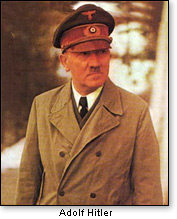 When a Communist speaks of serving the "causes of humanity," his meaning is about as benevolent as Hitler's claim to advancing the Aryan race (by which he meant kill the Jews for the Master Race). Based on Communism's blood-soaked record (100 million killed), a Communist speaking of "advancing the cause of humanity" can be interpreted to mean kill anyone who stands in the way of the dictatorship of the proletariat.

If you have read Karl Marx or the Communist manifesto, you can skip reading Howard Zinn, he's just an echo of the other two, according to Flynn. Having read all three, this column concurs.

The People's History tells us a lot about Howard Zinn.

Zinn wants our kids to grow up hating America because he says greed has motivated the United States in everything it has done during its relatively short history. These include our revolt against Britain in 1776, the Civil War, and World Wars I and II. All were done for evil profits.

Reading the "analysis" offered by a man so blinded by hatred for America, one wonders: if we invited our enemies tomorrow to come and get us (invade, occupy, and starve us all to death), would we be deemed to have been motivated by "greed"?

In 1776, King George III  it seems  was a poor, misunderstood boy badly abused by those evil denizens of the colonies who didn't appreciate his beneficence.

Sarcastically, Zinn "credits" the Founders because they created "the most effective system of colonial control devised in modern times, and showed future generations of leaders the advantages of combining paternalism with command." 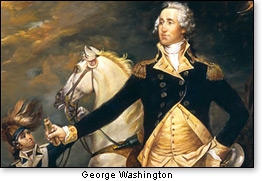 Nothing about America as a model of self-government throughout the world. Not even a tiny mention of the fact that if the Founders had wanted to ape other dictatorships around the world, they could easily have done so.

Nor is there the slightest acknowledgement that George Washington rejected the entreaties of some of his more zealous supporters that he should become President for life. Real dictator there, that guy Washington. Never mind that he in fact reluctantly agreed to run for President. An America-hating Communist, of course, sees him as a de facto tyrant.

The Civil War was an act of oppression too. Oh, yes. Forget the emancipation, reasons this Communist. The result of the Union vs. Confederate battle was that "class consciousness was overwhelmed."

So let me see if I've got this straight: Because both slavery and emancipation distracted attention from hating "the rich" (which to a Communist means anybody with a job), both slavery and emancipation were evil. Sounds to me like a fair comparison in the mind of a Communist: Heads I win, tails you lose. No doubt the same would have applied if both sides had simply shot themselves.

World War I  or the "Great War"  was "an artificial community of interest between rich and poor." Ah, yes. Another evil plot to suppress the glorious socialist revolution.

World War II? Pearl Harbor? Our own greedy capitalists, not the Japanese, were to blame. And never mind that Hitler signed a pact with Zinn's idol, Joseph Stalin. That is clumsily glossed over, as Zinn, in one of his pretzel-like twists, suggests a de facto agreement between Hitler and Roosevelt. And of course, he ignores the real ideology of Hitler's National Socialism: socialism for anti-Semites.

Moreover, the propaganda-ministry "historian" laments that America made certain that after the war the U.S. "would penetrate areas that up to this time had been dominated by England."

The truth: the British Empire was dismantled  by Britain. But as Daniel Flynn notes, "No American Empire moved in to take its place." Moreover, America rebuilt both Germany and Japan, and both are among our chief economic rivals, not our colonies. Got to watch those imperialist Americans. No telling whom they will "enslave" next. 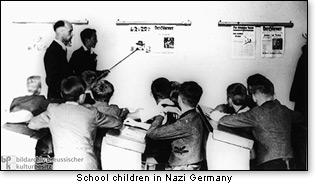 We can laugh at Zinn's pure idiocy. But his writings have penetrated our scholastic infrastructure, with a wave of brainwashing that calls to mind the thirties when little German children were shown in movie theatres saying  one after the other  "I belong to Der Fuehrer." Young minds can be vulnerable to anything that packages itself as noble.

So, back to the question: Is it safe to send your child to school? I don't know. It's just that in recent decades some kids have come home from school repeating to their parents some wacky things.

Parents can fight back by paying attention to the material passed on to their offspring as "history" or "social studies." If Zinn's theories are being foisted onto your kids, you have every right to protest.

And don't let anyone shout you down with words like "witch-hunting" or "McCarthyism" or other trigger words meant to shut you up. Howard Zinn was a proven Communist. He was a child-mind predator  a lying blackguard.

Ronald Reagan said freedom is only one generation away from extinction. An army of parents can prevent Howard Zinn's lies from misleading the next generation as the faux "historian" triumphs from his grave.