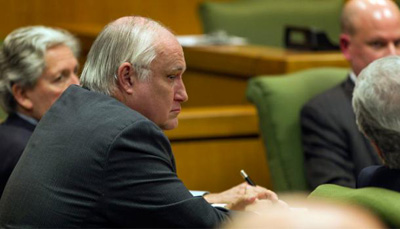 GEORGETOWN, TEXAS (3/24/15) – According to a breaking story in the Huffington Post, former D.A. and Judge Ken Anderson pled guilty to intentionally failing to disclose evidence in a case that sent an innocent man, Michael Morton, to prison for the murder of his wife.

That story states: When trying the case as a prosecutor (D.A.) Anderson possessed evidence that may have cleared Morton, including statements from the only eyewitness to the crime that Morton was not the culprit. D.A. Anderson sat on this evidence, kept it out of sight and then watched Morton get convicted and sentenced to life in prison.

While Morton remained in prison for the next 25 years, District Attorney Anderson's career flourished, and he eventually became a judge. This along with the financial reward received for this conviction which serves as the motivation that drives the justice system today.

An example of this was the Glesty story below. The DA on that case was Charles Rodgers, who after the false conviction, went on to become a judge, while his replacement, Deputy D.A. Bonnie Dumonis completed the case successfully for the D.A. and was promoted from Deputy to D.A., became a judge, then went back to become District Attorney of San Diego County. This is known as career advancement in the business of cash for convictions.

The conviction of Ken Anderson is a rarity in an age where police and prosecutorial misconduct goes largely unpunished. Even though this D.A. was convicted on April 23, 2013 and sentenced on December 9th, 2013, that news was mostly kept low-key but finally broke on Tuesday, March 24, 2015.

This revelation comes on the heels of my own story published just before this one, titled, A Man Called Glesty-An Unlikely Suspect. It detailed a classic such case and mentioned two other news-focused cases involving myself and a County Superintendent. Here is the link to the story about Glesty which you need to see: http://www.renewamerica.com/columns/miles/150323

My story details how District Attorneys are given a bonus for every charge they make against someone, with even more bucks for every conviction. This gives a monetary reward which is an incentive to convict and jail people, guilty or not. Here is that link: http://www.renewamerica.com/columns/miles/150128

We are grateful for the writer of the Huntington Post story, Mark Godsey, a Carmichael Professor of Law, University of Cincinnati College of Law, and Director of the Ohio Innocence Project who made us all aware of this important event.

The Innocence Project using law school students, has reopened cases of many, many people wrongfully convicted and who have been rotting in prison for decades for something they did not do, but something for which a District Attorney was given a financial incentive to make sure it was accomplished. Unfortunately, many, many innocent people have been executed-yes horribly put to death, for something they did not do.

That is absolutely NOT a concern of District Attorneys. These money-hungry power seeking fanatics have absolutely no morals or even decency. They do not have one ounce of concern for the people whose lives they ruin. They have no conscience, no heart and not even a soul.

And what was this sentence given to District Attorney/Judge Ken Anderson for falsely putting a man in prison for 25 years? Ten days in jail, which was reduced to 5 days, a $500 fine and 500 hours of community service.

WHAT? One gets 2 years in prison and a $10,000 fine for littering. Yep, Don't Mess With Texas. But it seems to me that the crime of ruining a man's life and his family would require more punishment than throwing a wrapper out of your car window.

Even that Texas prosecutor-Judge, who was disbarred and had to surrender his law license, will still get his cushy retirement package. That is yet another crime against citizens.

As for the sentence, that corrupt District Attorney should have received the exact same sentence, 25 years, that was imposed upon Michael Morton. And that should be the standard for ALL such cases overflowing with prosecutorial misconduct.

The office of The District Attorney is supposed to be about JUSTICE, not convictions for cash. But that is what it is today. This is the result of neglecting Constitutional law implemented for the protection of all citizens. Instead these prosecutors manipulate and hide evidence to insure a conviction. What happened to that legal reference, Innocent until PROVEN guilty?

What is called for today is to recruit honest lawyers, now hold on, there are some out there, and have them begin to file lawsuits against those who prosecute these false cases, and then sue the D.A.s and corrupt judges. There should also be a huge lawsuit against each county where these abuses take place. This must and can be done.

Honest lawyers, come front and center. We need you. Help right this wrong and there may be a reduction of lawyer jokes and barbs as a result. Correction is needed in our legal system. And it begins with you.

The Innocence Project is a beginning. That can be enlarged to include the above false cases, and bring lawsuits against all who are a part of legal malfeasance, a necessary action to indeed protect our citizens. This has gone far enough.

These six things doth the Lord hate, yea, seven are an abomination unto him; a proud look, a lying tongue, and hands that shed innocent blood, a heart that deviseth wicked imaginations, feet that be swift in running to mischief, a false witness that speaketh lies, and he that soweth discord among brethren. Proverbs 6:16